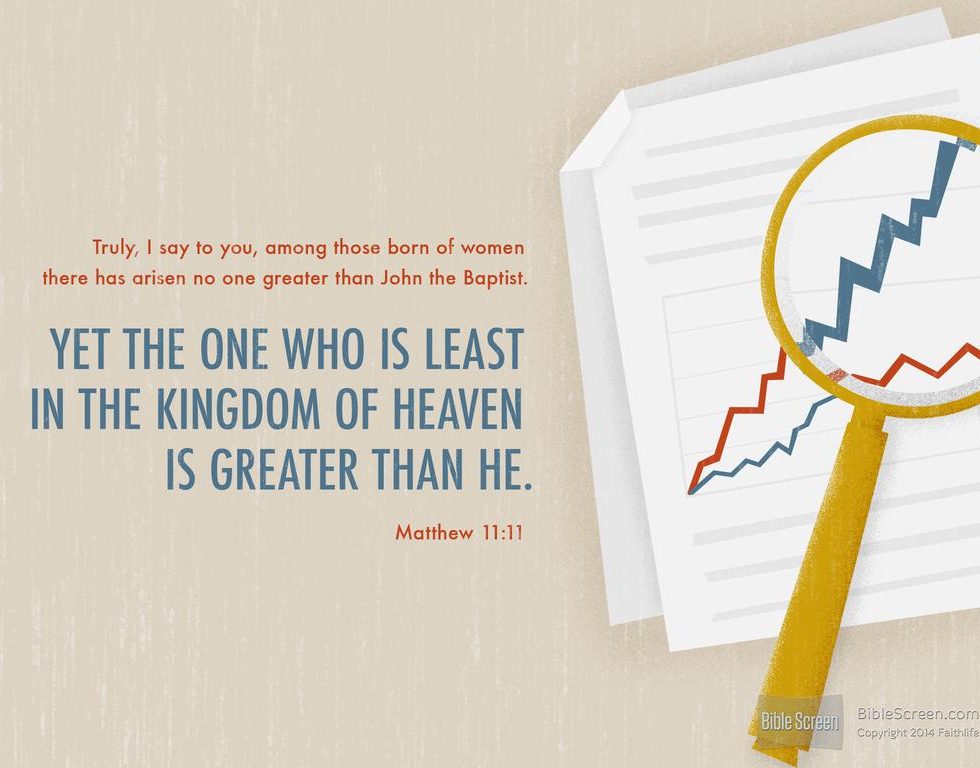 This is a time of year for surprises. You go under the tree, open up a package, and we find stuff we were not expecting. Sometimes those are good surprises. I have told you that the first Christmas Erica and I did together, she surprised me by making a batch of butterhorns. That was a good surprise. And then there are the presents we open and go, “Oh…that’s nice.” Like the time my mom got me a new package of handkerchiefs. Practical? Sure. But not very exciting.

Reading the story of Israel in the Old Testament, there’s a common theme that appears again and again: God is a God of surprises. God does not always act in ways people expect. When God delivered Israel from slavery, He chose Moses not while he was prince in Egypt but when he was reduced to working as a shepherd. When God delivered Israel from the Midianites, He chose Gideon, the least important member of the least important family of his tribe. When God delivered Israel from their enemy Goliath, it was not by an armed warrior, but by David, a teen age shepherd with a sling. And when God spoke to His prophet Elijah at Mount Horeb, it was not in the wind, an earthquake, or a fire, but in a still small voice. Finally, when God would bring ultimate deliverance to His people—and to all people—it would be in a way that many were not readily expecting.

Israel expected God to act in certain ways. The people of Israel expected God’s reign to come in a way that was powerful, mighty, irresistible. The God of Creation, the God who Parted the Red Sea, would surely save His people in a similar, mighty way. In Jesus’ day, some, like the Zealots, expected deliverance from Roman occupation and a return to Israel of political independence. There were many in Jesus’ time who thought the promised Messiah would be a Political, not a Spiritual, Savior. Some, like the Essenes, expected a final, end of times judgment in which all sinners, both inside and outside Israel, would be condemned and the righteous glorified. Generally, it was expected that when the Messiah did come, God would restore Israel to its former glory.

But that is not how God thinks. That is not what God did. In Jesus, God acted in a way that was unexpected. For instance, Jesus’ proclamation of the Good News and His call to repentance could be resisted. Can you imagine God going to all the trouble of sending His Son Jesus to save us, and then He didn’t make people take it? On the one hand, the demons and the forces of nature did obey Jesus’ word and command. Yet many people rejected His words and did not believe. The parable of the sower explains this: Though Jesus’ words have power to create faith and new life, hearers can reject it and not believe.

To make this even more interesting, it is “bad enough” that we are allowed to reject Him. Not only is the Grace of God irresistible, the Church and its Savior would actually suffer violence. John the Baptist, though he was the messenger proclaimed by the prophets Isaiah and Malachi, was in prison and would eventually be executed. Jesus Himself would be rejected and crucified. And Jesus warned His disciples that they, too, could expect persecution for the sake of the Gospel. As Jesus says, the kingdom of heaven suffers violence and the violent take it by force (v 12).
Well, that was the way things were then. John the Baptist, who had always lived outside, always been a rugged, Marlboro Man (Most Interesting man in the World) kind of dude, was in prison and frankly was doubting if Jesus was the one. Jesus didn’t come in Might and Power. He came to sacrifice Himself for us.

If Jesus is the Christ, why hasn’t He restored all things?

If Jesus is the Christ, why do His followers continue to suffer persecution in this age?

Well, I think you all know the answers. All of us continue to deal with the effects of sin—blindness, disease, separation, death—and we may not experience healing this side of eternity. Sin is here, which is our fault, not His, and we have to deal with what sin does to us and does to the world we live in.

Yet there is this amazing grace in how God acted, even if unexpectedly, in the humble service of His Son. We are surprised that God didn’t wipe out the Romans, that Jesus didn’t respond to His accusers like King Kong, or Rambo. But, Jesus came to save Israel from sin and its effects. Jesus did come to save His people. But not from the Romans. Israel’s main problem was their sin and rebellion against God. Our main problem is sin and our rebellion against God. The miracles Jesus performed—blind receiving sight, lame walking, lepers being cleansed, deaf hearing, the dead being raised, and the poor being evangelized—show that Jesus came to undo sin and its effects (v 5). And He did do that.
Perhaps this should have been expected by the people, for in this Jesus fulfilled many of God’s promises made through the prophet Isaiah. It is interesting how many people could be wrong. All those scholars, scribes and priests. And maybe even John the Baptist. All wrong. We saw a similar thing in this country about a month ago. In Jesus’ day, most everyone thought the Messiah would be a political emancipator. But that is not what was in the Old Testament. Isaiah especially referred to the “Suffering” Servant. And ultimately, Jesus’ suffering and death on the cross would serve as a ransom for many (Mt 20:28).

That God would save Israel and all people through Jesus’ humble service, suffering, and death is perhaps the most unexpected thing . . . but it is also the best. For those to whom the Holy Spirit comes, there is now forgiveness, new life, and salvation. Many in Israel were saved by the works of Jesus the Christ. We don’t how many, but I always figured Jesus healed thousands of people in His three year ministry. But think of the billions that Jesus saved from their sins.

The Gospel continues to call us to faith and new life in Jesus. Those who believe in Jesus are blessed (v 6), and the least person in the kingdom of heaven is great because we experience God’s saving grace now in Jesus Christ our Lord (v 11). That’s what Jesus was talking about there. Even the most timid, the newest disciple is great because they/we have the forgiveness and salvation in here, won by Jesus in His death and resurrection.

It’s comforting to see how Jesus proves Himself faithful to His prophet John while John is in prison. Jesus encourages John by directing Him to the works of salvation, healing, and restoration He’s performed. Jesus’ Works of Salvation Show That He Is the Promised Christ, the Coming One. He didn’t do it the way people expected, but Jesus is the One.
Is this a surprise to you? I know we all have experience with surprises. Hopefully, we will all have some good ones in about two weeks. But it should not surprise us at this point that God does not do things the way we would do them. And we need to thank God He does not do things the way we do them. God knows what He is doing. And as Jesus told the associates of John, I tell you that Jesus is God’s Son, He is Your Savior, He died and rose for your sins, and you are saved because of what He did.

Adapted from a sermon in Concordia Pulpit Resources, Vol. 21, Pt. 1.