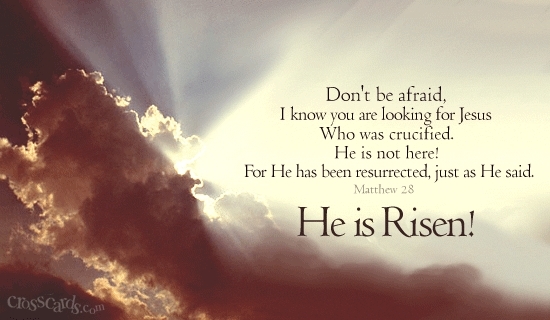 The Lord is Risen! (He is Risen Indeed!)

Back in December Matthew and I were at Office Depot.  I was looking for a new carry-briefcase-thingy for my computer.  While talking with the salesman, we heard a boom, and the next thing you knew the ground was shaking and sales price cards were falling on the floor.  When it was over, Matthew looked up at me and asked, “Dad, what was that?”  I said, “About 4.0.”  It was a 4.2.

We remember today another day of an earthquake.  Early in the morning two women set out on their journey.  The women approach the tomb, its perimeter sealed by temple guards. Pilate had responded to the priests and Pharisees who wanted to the Romans to guard the tomb: “You have a guard of soldiers. Go, make it as secure as you can” (Mt 27:65). Smirks and smiles might spread across the guards’ faces as they spy the women carrying the spices for anointing. Elbows jab and knowing glances exchange as they envision having some fun at the expense of these two puny disciples.

Two Jewish women, approaching temple guards, this did not work in rabbinic Pharisaic culture! No man spoke to a woman not related by blood or marriage.  That’s why the apostles thought it was such a big deal to find Jesus talking with the Samaritan woman at the well (Jn 4:27). A clash of culture, a clash of the sexes, and a clash of biblical prophecy was in the making. A tense standoff was developing. Who would act first? Who would break the silence?

The psalmist reminds us “the mountains skipped like rams, the hills like lambs” (Ps 114:4). Yahweh went first and broke the silence through His angel as another mountain rumbled, announcing that God was doing a new thing. A messenger of the Lord descended and rolled back the stone, there was an earthquake, and the temple guards dropped like dead men, in fear of the angel.  As for the tomb?  It was empty.

Today, Resurrection Sunday, let there be no doubt that the Lord and Savior, Jesus Christ, and not the Easter Bunny, is the focus of our worship. I want to point out here that while it is bad enough that many have bent to the will of political correctness and say “Seasons Greetings” instead of “Merry Christmas,” we also do this when we say to each other “Happy Easter.”  I know we do it.  I do it.  But the truth is, why on this Lord’s Day would we mention Easter, the ancient and abandoned Anglo-Saxon goddess of springtime when we are to proclaim that Jesus has conquered death and the grave?  What we are supposed to say to each other today is not “Happy Easter,” but instead I say “The Lord is Risen!” and you say, “He is Risen indeed! Hallelujah!”  We need to remember that Jesus rising from the dead is not some side issue of doctrine, it is the BIG THING.  As St. Paul reminds us: (1 Corinthians 15:14) “… if Christ has not been raised, then our preaching is in vain and your faith is (also) in vain.”

Jesus did rise.  In the fine Lutheran tradition, let me ask then What Does This Mean?  Right now many of you are worried, frightened. We don’t know what tomorrow will bring. You’re not sure of your job, your family, your finances, or your future. For some of you, today may look dark and the days ahead may look darker. But because Jesus Christ has risen, and He is your Savior, you know that whatever is coming, you will not go through it alone.  Do you feel all alone?  Do you feel no one cares about you, that no one would miss you if you disappeared? If so, the risen Christ, the living Lord, offers this assurance: “I am with you always” (Matthew 28:20). Even more, Scripture assures us we can cast our cares upon Him because He cares for us. (1 Peter 5:7)

Jesus did rise.  What Does This Mean?  Are you troubled by sins you have done and the good you have left undone? Are you feeling guilty?  Do you lose sleep; does your mind dwell on where you have let God down, your family down, your friends down, yourself?  A risen Jesus, the same Jesus who forgave the woman caught in adultery, the paralytic who was lowered down before Him, the woman who wept at His feet, the apostle who betrayed Him, and others who deserted Him, can also forgive you. Jesus can and will wipe away your sin, cleaner and more completely than with anything you can buy at Wal-Mart.   The apostle John lists no exceptions to Scripture’s promise; he holds no reservations when he says to those who believe in the risen Redeemer, “the blood of Jesus (God’s) Son cleanses us from all sin” (1 John 1:7).

Jesus is risen. What Does This Mean?  We here in Oklahoma know all about tornadoes, storms, wind.  But when we talk about the storms and gusts and lightning strikes, or the problems that jump up in our lives, because Jesus Christ is risen, all who believe can look at sin, death, the devil, and the disasters of life and say, “Blow hard as you want, but I still have Jesus Christ. With faith in my living Lord, I shall ride out the storm and by His blood and through His resurrection, I will come through this, saved.” The Lord is risen!

You, my friends, are here this morning for a variety of reasons. Perhaps you are here only to keep the peace in the family. By the power of the Holy Spirit, allow Jesus to meet you where you are. All our Lord seeks from you is an empty hand to receive the forgiveness of your sins, and there is nothing to fear, only mercy to receive. Jesus is very happy give sinners like us the gifts of forgiveness, truth, and His resurrected life.

The news then, and the news today, is Good News.  The Lord is Risen! But how to proclaim this news? We need to proclaim it.  What we speak and witness to is no con job. It is the most cosmic-changing event the world will ever know, the resurrection of Jesus, because through His shed blood on Calvary, the sting of sin was taken away, death was defeated, Satan was dethroned.

Jesus has placed you into your vocations, into whatever job or school or place in  life you have so that, as you serve your neighbor in this earthly life, you have that platform of credibility, to speak about Jesus Christ, the resurrection, the forgiveness of their sins—at the water cooler, over lunch, at the company picnic. But at this point, people get a little self-conscious about broaching the subject of religion. Along with sex and politics, it’s among the subjects that are off-limits in polite society.

My friends, the King of the universe is the one who sets the ground rules for polite society. You have been authorized, not by the governor or the president, but by the risen Lord Jesus to speak, to share the Gospel—and without apology.

I’m sure no one here asked for permission to share the glorious news of an engagement to their sweetie, or the birth of a grandchild,  or your favorite football team winning the Super Bowl. Unself-consciously, we tell all whom we meet. Or, who here asks for permission to tell others they’ve been healed from cancer? Do you? I think not. We may even at times blurt it out almost a little impetuously. But that’s okay, for you have received the good news of healing.

Jesus Christ’s resurrection proves that sin was defeated on Good Friday. And with sin’s defeat you live with Jesus Christ for eternity. Once more, sometime in the future, the mountains will skip like rams, the hills like lambs (Ps 114:4) when all the dead are raised. Then you, my friends, will receive a glorified, resurrected body, to continue living with Christ even when time ceases. This is Good News.  This is the best News.  And all this is why?

Because the Lord is Risen!