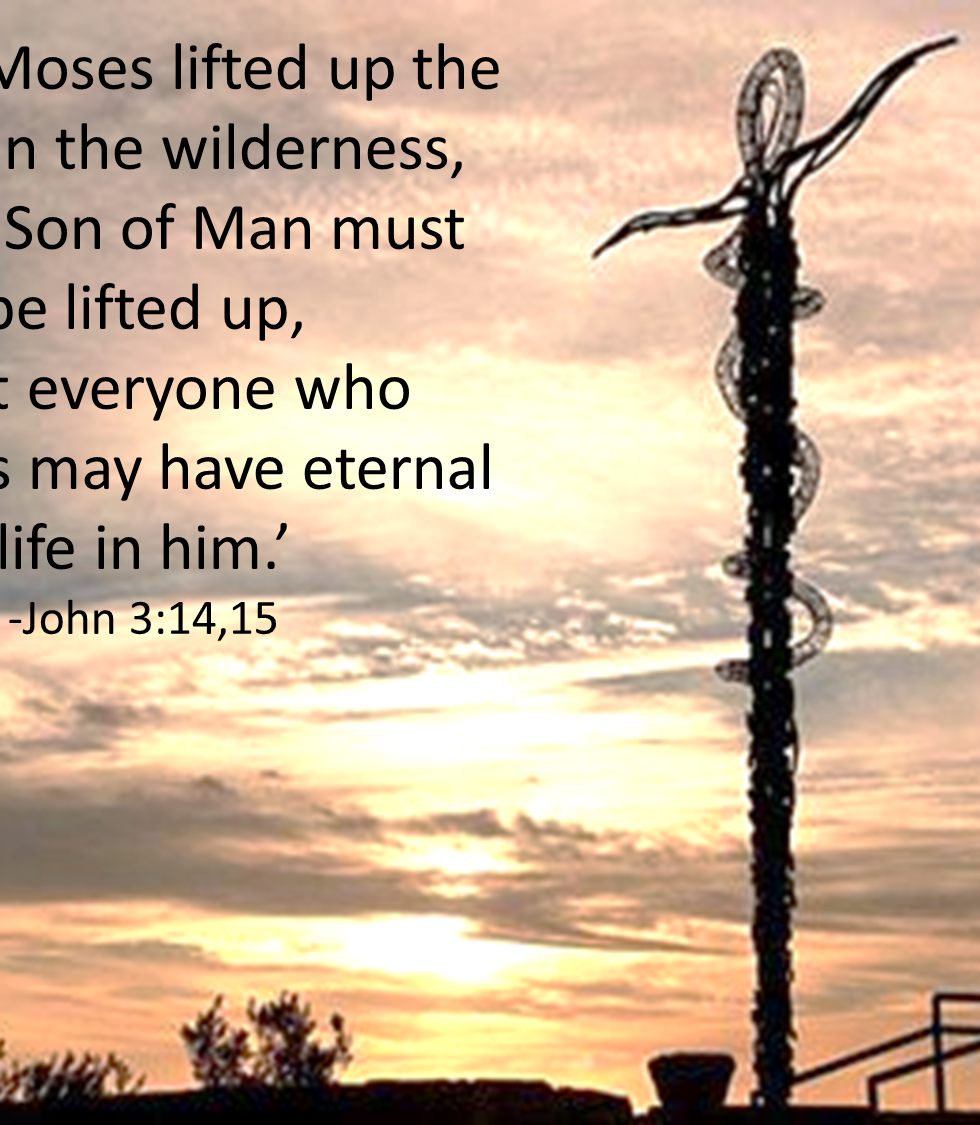 Did you notice the title for today’s sermon? It’s “Snakebitten”! In our way of speaking, that expression can mean a couple of things. It can mean just what the word says—that someone was literally bitten by a snake. Also, the word can mean that someone has had what we might call a run of bad luck.

For example, to describe a baseball player who’s in a batting slump, we might say that he’s “snakebit.” This simply means that the player is doing poorly at the plate and we’re jokingly suggesting that the reason for his batting slump is because he was bitten by the “snake” that causes bad luck! Of course, there is no such thing as a “bad luck snake”; we simply say that in an effort to try to explain the oftentimes unexplainable.

If we had been with the Israelites who are described in today’s Old Testament Reading, they would probably have told us that they were “snakebitten” in both ways that I just described!

First of all, they would have said they were “out of luck.” Now remember as Christians we do not believe n “luck,” God is always looking after us and taking care of us. But the folks in the Bible were very superstitious, unlike people today, and they would have blamed both God and Moses for leading them out of Egypt into a desert wilderness and then abandoning them.

For over four hundred years, the Israelites had been in Egypt. While there, many generations had died in slavery. Once freed from slavery, another generation had died on the journey to get to this point. And now, the Israelites were so close to entering and possessing the Promised Land for which they had hoped for so long. But the king of Edom had ruined their plan. He had just forbidden them to pass through his land to get to their destination!

Frustrated and exasperated, the Israelites did something that each of us have been known to do from time to time. In their disappointment that God did not make things go according to their plan, they became impatient with him! Their impatience turned into complaints, and their complaints turned into self-pity. And, sadly, all of that then turned into rebellion.

Of course, even those with a basic understanding of Scripture know that God does not and will not tolerate rebellion. Sometimes, He acts right away, and sometimes He doesn’t, but He always addresses it! Count on that. In this case, God moved quickly! Immediately, He sent poisonous snakes to punish the people for their open rebellion. So, sure enough, the Israelites were snakebitten in the other way too, and many of them died.

By sending the snakes, God showed three things to the Israelites. First, He showed His justifiable anger with them for their rejection of His grace and protection given to them for the past forty years and even before that.

Second, He wanted to show them (again!) that their own rebellious action was the direct cause of their problems. Remember, it was their rebellion forty years earlier that caused them to have to wander in the desert and not be able to proceed immediately from Egypt to the Promised Land in the first place!

And third, God brought the deadly snakes among them in an effort to show them their sin and lead them to repentance. He wanted to show them (again!) that their rebellion, their rejection of Him, would lead to His rejection of them and their subsequent death apart from Him in hell.

By now, you might be saying, “Well, that’s a good story, but how does that affect me . . . in my life . . . right now? After all, that was several thousand years ago. What does it have to do with me?”

Friends, we can all take a lesson from our forefathers in this story. We, too, often become impatient with God’s timing, don’t we? We, too, want to take matters into our own hands without first seeking God’s direction through His Word and going to Him in prayer. And we, too—even if we do seek God’s direction for our lives—often find ourselves ignoring His promises and striking out on our own. Here, you see, here is where we all enter this story. Just like the Israelites, we, too, go against God and His direction and leadership for our lives. We can think that God is taking too long to bring us the spouse we want, or the job, or the school, or the house that we want.

In the 1970s, there was a British/American rock band called Fleetwood Mac. One of their biggest hits was “Go Your Own Way.” I seriously doubt that they had any biblical concepts even remotely in mind when they recorded it, but that title, “Go Your Own Way,” describes our human condition to a T. It describes the honest truth about our desire to “go our own way” rather than follow God’s clear direction and fully trust his promises.

The Israelites in the wilderness had rejected God and had determined to go their own way—apart from God. And you . . . me . . . well, it’s our song too, isn’t it? We are— aren’t we?—constantly rebelling against God and His call to trust in Him above all else.

We said earlier that God had sent the snakes among the Israelites in order to bring them back to repentance and faith in Him. That was His ultimate goal, as it always is. God’s goal wasn’t to condemn them, but to save them. And His love for them was behind it all! It’s incredible, when you think about it. He continued to love them in spite of their open rebellion!
To this very day, God continues to use adversity and the various problems that we have to draw us back to Him or keep us by His side. And, by the way, most of those problems we actually bring upon ourselves—just as did the Israelites. But God will see us through them.

As we saw, God had a solution for the rebel Israelites. They who were dying from the snakebites were to look at the bronze snake that He had directed Moses to lift up on a pole. Those who looked at the bronze snake, not as a god, but as a symbol of God’s promise and protection, were saved. Those who were dying were given life! Their faith in God—that He still loved them in spite of their rebellion—healed them and saved their lives.

Out of that same love, God has also provided a solution for us and the rebellion each of us has toward Him. God sent Jesus into the world to be lifted up onto a different kind of pole. In today’s Gospel, John recorded Jesus’ own words regarding what would happen to him: “And as Moses lifted up the serpent in the wilderness, so must the Son of Man be lifted up, that whoever believes in him may have eternal life” (Jn 3:14–15).

Jesus was lifted up on a cross to suffer the punishment, the condemnation, the death that each of us should have received for our own rebellion. We, who were “snakebitten” with sin—our own sin—and were dying from those wounds, are now saved from an eternal death in hell just as surely as the Israelites were saved from death in the desert. When we think God is taking too long to give us what we want, when we think we are smarter than Him, all our sins are taken away because of this.

The simple act of a snakebitten person looking at a bronze snake raised up on a pole caused the “snakebitten,” dying rebels to be healed and live. They would live and be admitted into the Promised Land, where they would be safe from the Egyptians, who saw their worth only as slaves.

Likewise—but on a far grander scale and with eternal implications—the simple act of looking up at Jesus raised up on the “pole” of the cross for our sins causes us who are dying from sin to be healed and live. In Christ Jesus, through faith in His promise to forgive us of all our sins through His death and resurrection, we are healed and will live with Him forever in the promised land of heaven! Our Father in heaven sees us as valuable and special—worthy of His own Son’s life.

The Israelites in the desert repented of their sins and received forgiveness and life. We, too, recognize our sin—our sinful desire to “go our own way.” Led by the Holy Spirit, we repent and daily return to our baptismal faith, where we live in God’s forgiveness and live out the new forgiven life.

My Brothers and Sisters, Christians, all of you “snakebitten” people who were dying in your sins: Now by God’s grace through faith in His one and only Son, you will be “raised up” from the dead on the Last Day. You’ll not only be raised from the dead, but as God promises, you will also be raised up to heaven, where you will live with Him forever! Thanks be to God!