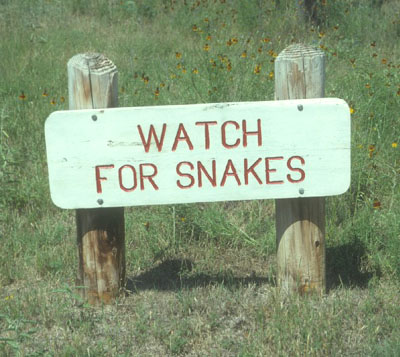 How do you feel about snakes? Personally, I am not a fan. I don’t like spiders or snakes. A snake got between me and the lawnmower back when we were in Pryor. I never jumped higher. Every so often you read on the internet that someone who has a pet python or some such thing, that the snake kills the person giving it a home. When I read about those things, I always ask myself, “Why do you want that in your house?” And then I think of the story of the scorpion and the frog.

Serpents, snakes have been a problem for us. It was so in the beginning, all the way back to Genesis. But God has also helped us out with this, at least with one Snake: “[The Christ] shall bruise [the serpent’s] head, and [the serpent] shall bruise [the Christ’s] heel” (Gen 3:15). The fiery serpents near Mount Hor struck the Israelites, bringing death, just as the Satan/serpent had spoken the death-causing lie to Eve. But in the garden, and in the wilderness, there was no one to crush the heads of those serpents.

Let’s set the stage. You heard that “the Lord sent fiery serpents among the people, and they bit the people, so that many people of Israel died” (v 6). The event near Mount Hor was divine punishment for the unbelief of God’s people. Though the Lord had brought the Israelites out of slavery in Egypt and had provided for their welfare during their journey, “the people became impatient on the way. And the people spoke against God and against Moses” (vv 4–5). After nearly forty years of God providing for their needs, they again complained about the situation that they were in. They were tired of the travel, and they were sick of the food that God gave them each day. (Manna Cookbook: Manna Soup, Manna Casserole, Manna Hash, Manna Loaf, Slow Cooker Manna Surprise, Manna Alfredo, Manna Enchiladas, Manna Lo Mein, Barbecued Manna)
It is interesting that God used snakes to punish Israel. It can be hard to come up with good things about snakes. But we can. The inland taipan (this snake is found in Australia) is said by some to be the most venomous land snake in the world. There’s enough venom in a single bite to kill one hundred people (cf Num 21:6). But the protein in this snake’s venom has been found to be useful in stopping excessive surgical bleeding. Similarly, the venom of the Malayan pit viper seems to have potential for helping stroke victims. And cobra venom is being used in researching cures for Parkinson’s and Alzheimer’s diseases. The venom of sin, however, has no benefit for man. It only kills.

God, like any parent, saw the need to correct His children’s behavior. Israel rejected Him, His wisdom, His gifts. As we have discussed here in the past, substituting our wisdom for God’s is a bad idea. Thus, God sent the snakes to call the people to repentance. And when the Israelites realized that, they recognized their guilt: “We have sinned, for we have spoken against the Lord and against you. Pray to the Lord, that he take away the serpents from us” (v 7). The Israelites’ situation had turned them back in penitence to the one who was their Deliverer and Provider.

It was not the Lord God’s will to kill all the Israelites in the wilderness. He had made a promise, a covenant with them, one that He would keep, even as His people were unfaithful. The Lord God heard what His people said in repentance. And to them, He provided a remedy for what they were dealing with: “And the Lord said to Moses, ‘Make a fiery serpent and set it on a pole, and everyone who is bitten, when he sees it, shall live’” (v 8). “So Moses made a bronze serpent and set it on a pole. And if a serpent bit anyone, he would look at the bronze serpent and live” (v 9). (Caduceus)

The solution was given to the problem the Israelites faced. Believing in the Lord God’s promise, they could look at the statue and live. Once again, the Israelites were restored. They heard what the Lord God said and saw what He did, and they stopped grumbling and complaining. For a while. They did not speak out against Moses and the Lord God but believed and trusted them. For a while. And through faith, they were saved. As they believed, they looked to the sign of salvation and received it.

To whom do WE turn? Where can we look to be saved? What has been set up for you to look at? That is what Jesus tells you: “As Moses lifted up the serpent in the wilderness, so must the Son of Man be lifted up, that whoever believes in him may have eternal life” (Jn 3:14–15). Jesus identifies Himself as the standard of salvation. Those troubled by sin, victims of Satan’s venom, are to look to Him who was lifted on a pole, a cross, a tree, and there find forgiveness and life.

The bronze serpent fixed the problem that the wilderness serpents caused the Israelites. But Jesus says that He is the solution to the universal problem that the Satan/serpent brought into the world beginning at Eden. Jesus is the solution to sin. Jesus is the promised serpent-crusher (remember when we started with Genesis 3?), the one who brings righteousness to those who lacked it and life to those who were destined for death and hell. Jesus is not something that cures you of simple poison, the cure Jesus brings is eternal. This cure for sin is that Jesus died and rose for you.

The Gospel of John records this eternal benefit that Jesus brings. Many of you know these words of Jesus so well: “For God so loved the world, that he gave his only Son, that whoever believes in him should not perish but have eternal life. For God did not send his Son into the world to condemn the world, but in order that the world might be saved through him” (vv 16–17). There is ample reason for the Lord God to condemn the world, just as there was for God to kill all the Israelites in the wilderness. But in mercy, the Lord God acts in a much different way, bringing salvation to a dying, poisoned world.

Life comes to us, we who are poisoned people, an eternal antidote produced from the fruit of the tree of the cross. For as the merits of Christ’s death and resurrection are dispensed to you through Holy Baptism, Holy Absolution, the Holy Word, and the Holy Supper, the venom of sin is counteracted, and you are saved.

You no longer are destined for death. You no longer have reason to complain or speak out against the Lord God. He has delivered life to you and set you on a path to Heaven. What had been promised for us men and for our salvation has been done by Jesus. The Snakebite of Sin Is Overcome.

It is finished! He has taken your guilt. Your guilt is no longer your problem. Look to the cross of Christ and believe that Jesus Christ is God’s Son, the one who has rescued the world. In Him, we live! Jesus has cured us of the poison of sin.

And in His Name, we proclaim this Good News.