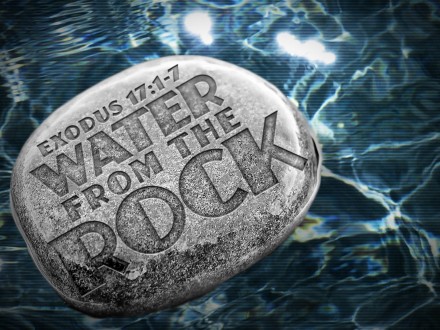 Has your life been perfect? Nothing has ever gone wrong in your life, right? For all of us, our lives are always just walking on sunshine. I know. That isn’t true. Bad stuff happens, to all of us. But sometimes we are tempted to think that as Christians we should have less of this stuff because we belong to God. Right? Well, it does not work that way.

We come to our Old Testament Reading, and we have a snapshot of what was going on about 3500 years ago with the children of Israel. After 430 years of slavery in Egypt, God got His people out of Egypt, out of slavery, and away from that nasty, grumpy Pharaoh. On Passover night, they ate a lamb, and with its blood they marked their doors. The angel of death passed over their homes, convincing Pharaoh to let them go. And then, in another dramatic act by God and a big old plot twist, Pharaoh changed his mind and sent his army after the Hebrews. God led his Israelites through the parted Red Sea, while the Egyptian army was departed when the Red Sea was de-parted, with God drowning Pharaoh’s army, with all its chariots and horses. They were God’s people, redeemed and saved from their enemy. And they were on their way to the Promised Land.

What came next for the Israelites? Well, their new life got off to a pretty good start. After the exodus, our Lord led his people to a place called Elim, where there were twelve springs of water and seventy palm trees. It was as if the Israelites had reached the Promised Land. We could say that Elim was a foretaste of the feast to come, a bit of paradise.

We have had similar experiences, whether it is here at church when we baptize a baby, or when we look back to the day we were married. Those sorts of things are little “mountaintop experiences,” and they are great. But these things, these feeling do not last. Hardships are sure to follow. We figure at times like that that life will be smooth sailing, a continuous high point. Then it’s not.

It never works that way. Good times are followed by bad, happy times by hardship. And no high can last forever. Time on the mountaintop is followed by a trip through the valley. The Israelites’ first crisis came with hunger. After leaving Elim, they headed out into the desert. After a month or so, things turned sour. They had no food. They were hungry, really hungry. For a lot of us, hunger isn’t much of a problem. Many of us could use a little more exercise and a little less food. But the Israelites were hungry and began to long for Egypt, the land of slavery, where at least they could eat. And we know the story. How God rained down bread from heaven, and how they ate and were satisfied.

And now, still in the desert, we come to crisis number two, our text. Moving along through the desert, according to the commands of God, they camped at a place called Rephidim. The problem was, there was no water. Now, that’s a big problem. Bigger than a lack of food. That’s why some warn us always to keep bottled water on hand, just in case of emergency. And if you’ve ever been thirsty, really thirsty, you know how bad it can be. You can go a lot longer without food than you can water. This was a big deal.
Sometimes, we think about the Israelites as grumblers, as ungrateful. And that’s true. They did grumble. But it was a fair question for them to ask, “What is God up to? Why has He delivered us out of Egypt if we’re going to go hungry and thirsty?”

And as a Christian, you might feel this way from time to time. You might think if my Lord has done so much to deliver me, to save me from sin, death, and the devil, why has He let me down? Why has He left me suffering? Why, if He is the Lord of bounty, does He not provide? Why, if He is the source of goodness, does not more of that goodness come my way?
Folks like Joel Osteen promise a better life, saying that Christ wants you to live in abundance, with every earthly blessing, right here and now. But that doesn’t seem to be the way God deals with His saints, with His people. The Bible does not say that will be our life.

Now, it’s interesting to see what happens next. The people, thirsty with the kind of thirst most of us have never known, asked Moses, “Why did you bring us up out of Egypt, to kill us and our children and our livestock with thirst?” (v 3b). So Moses cried out, “What shall I do with this people? They are almost ready to stone me” (v 4b). The Lord then told Moses, “Behold, I will stand before you there on the rock at Horeb, and you shall strike the rock, and water shall come out of it, and the people will drink” (v 6a). Sure enough, Moses struck the rock, and water came from the rock, and the people got their needed water.

They had wondered, “Is the Lord among us or not?” And the answer was yes. Yes, the Lord was indeed with His people.

What can we learn from all of this? Shall we be hard on the Israelites for their hard-heartedness? Well, we could, I suppose. I know I like to be when I teach this in Bible Class. But would we be any different? We are called upon to fear, love, and trust God with all our heart, soul, and mind, and that’s all true. But there are so many times we forget what God has done for us and we think instead, “What has He done for me lately?”

It’s remarkable when you look at this story: God doesn’t get mad at His people. In the exodus, they knew the redemption and saving power of the Lord. In the paradise of springs and palm trees at Elim, they learned of a Lord who wanted to bring His people back to a paradise better than Elim. But, in the meantime, there would be real hunger and thirst. And for that hunger and thirst, the Lord would deliver manna from heaven and bring water from a rock. Yes, our Lord would provide for His people, and in doing so, He would show that He was the one who provided, that He was a Lord in whom they could put all their trust. In the desert, our Lord was building a relationship with His people, and He was patient. He was, as the psalmist says, slow to anger, but abounding in steadfast love.

And what does that mean for us? We would do well to expect hardships. We should not be surprised when things go bad. Being a Christian does not mean life will be smoother sailing, less bumpy. Often it’s the opposite. And so often, it’s in the difficulties, in the tough times, that we remember our Lord and that we learn to rely on Him. In good times, we so easily become fat and happy, we so easily lose sight that God is the giver of all good things. No food fills our stomach unless it has been given by our God, and no water quenches our thirst unless it comes from our good and gracious Lord.

But even more, these stories point us to a greater hunger and a greater thirst that only God can satisfy. Our Lord says, “Blessed are those who hunger and thirst.” For what? For bread and water? No, “Blessed are those who hunger and thirst for righteousness” (Mt 5:6). Man does not live by bread alone, but by every word that comes from the mouth of God. Nothing can fill our ultimate longing but the Man, Jesus Christ Himself. He is the Lamb slain, from whom comes the river of life, in which our sins are washed away. He is the well, from which our deepest desires are at last fulfilled. Jesus Is the Bubbling Spring from Which We Drink Never to Thirst Again. (Gospel reading)

Like the Israelites, we’re in the desert, and we’ve still got some wandering to do. We should not be surprised to have hot days, hungry days, thirsty days. And maybe, along the way, we will grumble. But when we grumble and complain, know that the Lord hears your pleas and answers your prayers. Maybe not always as we would like, maybe not as quickly as we’d want. Like the Israelites, we may very well ask, “Is the Lord among us or not?” And the answer is “Yes, yes, yes.” And He will never leave us. And with that, we can be satisfied.