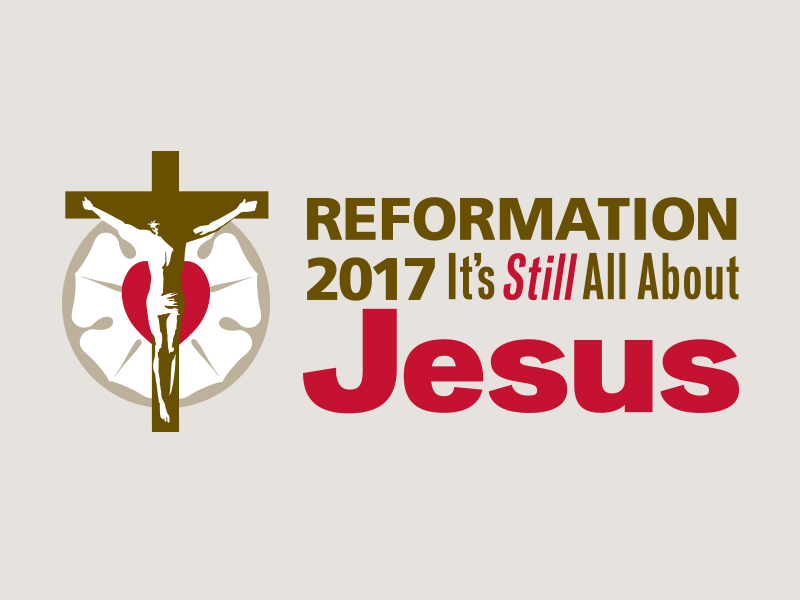 We make a big deal about the truth. We expect our spouses to tell us the truth. When someone testifies in court, they swear to “tell the truth, the whole truth, and nothing but the truth.” Some folks on some websites check around to see if what politicians tell us is the truth. When we are raising our children, we teach our children from very early on that they are to tell the truth. And of course, Jack Nicholson tells us, “You can’t handle the truth!” Today we are observing Reformation Sunday. The 500th one. We remember that day, October 31, 1517 (Luther did it on a Wednesday, the anniversary is actually Tuesday), when Martin Luther nailed those 95 theses to the door of the church in Wittenburg, Germany, a small thing by itself that led to some very big things. For what was at stake was the truth–the truth of what the Bible says, the truth of what God has to say to His people then, now and always. Today we are reminded that we are “Reformed in Truth.”

Before we go on, it might be wise for us to review. There may be some of you who do not know who Martin Luther was, or who need a refresher, perhaps. I am guessing not all of you saw the movie that was on PBS back in September. And Luther was a big deal. Ken Klass reminded us in his devotions two weeks ago that the TV series Biography had a countdown of the 100 most influential people of the second millennium. Do you know who was first? It was the German printer, Gutenberg. But do you know who was second? It was Sir Isaac Newton who contributed to physics, math, and such. Do you know who was third? Yes! It was Luther. A guy who never led an army, who never ruled a country, who never painted a masterpiece. TIME Magazine put Luther in the second position of 100 most influential individuals of the last millennium.
Martin Luther was born in 1483, the firstborn of Hans and Margaret. It was the hope of his father that Luther would be a lawyer. He turned to theology instead. When he was a monk and a professor at the university in Wittenburg, Germany, he noticed that what he read in the Bible did not line up with what the Roman Catholic Church was teaching. He wished to debate these discrepancies, and he listed the items he wanted to have a conversation about, 95 in all. And he found himself nailing this list of 95 theses to the door of the church in Wittenberg on October 31, 1517. In Luther’s day, the church had strayed away from what Scripture teaches, leaving God’s people under the burden of the Law. The Catholic Church was teaching then that Jesus alone did not save you. 500 years ago, in Luther’s studies, he had discovered those errors and in the process, rediscovered the Gospel.

Luther had become a monk because he wanted peace with God. The harder he tried to please God, though, the farther he found himself drifting away from Him. Luther even said in later years that if one could be saved by being a monk, he outmonked them all. But when Luther began to study the scriptures, and study them thoroughly, he came across passage after passage in places like Romans, Galatians and Ephesians that pointed out to him that he could not earn peace and forgiveness from God, but that peace and forgiveness have already been earned for us through the life, death, and resurrection of Jesus Christ. Salvation is a free gift from God to all who believe in Jesus as their Savior.

There was another passage that Luther came across that brought him comfort and joy. That was Psalm 46, the basis for his hymn, “A Mighty Fortress is our God.” This psalm was written to commemorate a miraculous victory of the children of Israel over the Moabites, Ammonites, and Edomites during the reign of King Jehoshaphat. The psalmist wrote, “God is our refuge and strength, an ever-present help in trouble. Therefore we will not fear, though the earth give way and the mountains fall into the heart of the sea….The Lord almighty is with us….Come and see the works of the Lord….Be still and know that I am God.” Luther reminded us in the most Lutheran of hymns, that ours is a mighty, saving God, a God who is our refuge and strength.

History also tells us that the church was teaching a lot of things 500 years ago that are not in the Bible. That list includes: purgatory, praying to the saints, that Mary was sinless, that the popes never made any mistakes, and that you could buy the forgiveness of sins, or pay to have your relatives released from purgatory and sent on to heaven. Those documents that said that were called “indulgences.” This last one was such a big error that the current Bishop in New York City said on the PBS Luther movie that this was a mistake that needed correcting.

Martin Luther did not set out to start a spiritual revolution. He wanted the Church to recognize what he thought was clear as day in the Bible. He wanted to fix the church where it had strayed from the Bible. For many reasons (that I don’t have time to go into here), the Roman Church did not want to have that discussion.

And Luther did not want to have a church/denomination named after him. In 1522, Luther, in his own colorful way, wrote, “I ask that men make no reference to my name and call themselves not Lutherans but Christians. What is Luther? St. Paul would not allow Christians to call themselves Pauline or Petrine. How then should I, a poor evil-smelling maggot sack, have men give to the children of Christ my worthless name?” He had a way with words, didn’t he?

Here ends, the history lesson. At this point, I should probably explain why this is such a big deal that we are remembering all this today. You see, today is not a day we thank God that we are no longer part of the Roman Catholic Church. That is what I heard in the sermons I got growing up in the 1960’s. Today is not a day we rejoice in denominationalism. (Although it is ok to be a Lutheran and it is ok to be proud to be a Lutheran.) Today is a day we give thanks to God and are joyful that God has preserved the truth for us. The truth of the Gospel. The truth of God’s plan of salvation for us. The truth that God’s Son Jesus died on the cross for us and rose again on the third day. The truth that we know we have been justified by grace, through faith, on account of Jesus.

Now I want to clue you in on something. Back when I was in seminary, one of the first things that I learned was that Lutheran doctrine and theology could be summarized in that one statement: We are justified by Grace, through Faith, on account of Jesus Christ. Justification is a fancy word, and a hard concept to teach to people. But let me try and explain it. If you have a computer, on many word processing programs, we are given options on how to format the text. The software will “Align left,” “Center,” “Align right” or “Justify” the text automatically. That word “Justify” is interesting. It means that the computer automatically adds or eliminates spaces so that the columns appear with nice straight lines of type on both sides of the page. The original copy is made with a nice neat margin at the left side, but the right is all ragged and out of alignment. When the typing is “justified,” the crooked margins are made to appear nice and straight.

When we are “justified” by God, the same kind of thing happens–crooked things are made straight. Sin puts our lives out of alignment–with God, with each other, even within ourselves. In the language of God, justification refers to the realignment of the poor, miserable sinner with the most holy God.

There is another way to look at this. In the language of the courts, justification refers to the acquittal of the accused. When God “justifies” us, it is the acquittal of the guilty. It means we who are guilty are pronounced innocent. It means your sins are forgiven, gone, taken away. The Reformation reminded the world that the Bible clearly teaches that it is God who saved us, that we do not save ourselves. The Reformation happened because Luther, and those who agreed with his views of the Scriptures, read in the Bible that we are forgiven, justified, by Grace, through Faith, on account of Jesus.
Luther wanted the truth of the Bible to be proclaimed. The truth is important. Jesus said in the Gospel today, “If you abide in my word…you will know the truth. And the truth will set you free.” We abide in His Word. We don’t abide in Luther’s words but in Jesus’ words. Luther was the one who tried to steer the Church back to what Jesus said; steer the Church back to the Truth.
Luther wanted the people of his church, his university, his town, his country, to know the truth.

The truth that salvation and forgiveness are won by Jesus: by His death and resurrection.

The truth that we are not saved by our works or by what we do.

The truth that salvation, forgiveness, faith are all things given to us by God, FOR FREE. (By Grace.)

The truth that God loves us so much that He sent His Son to do all this for us, win it for us, and give it to us.

The truth that we are saved by Grace Alone, through Faith Alone, on account of Christ Alone.

We rejoice today that this is the truth, the whole truth, and nothing but the truth.

We rejoice today that, “This is most certainly true.”