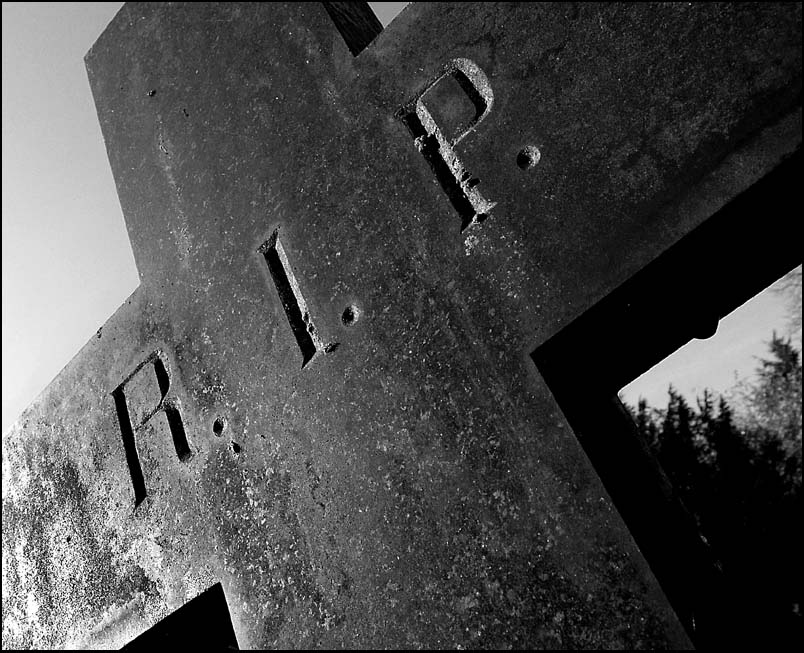 Exactly six months from today, the whole world will celebrate (again) one of the greatest days in human history—certainly one of the greatest days of the last century. On Sept 1 in the Western Hemisphere (or Sept 2 in Japan, where it was formalized), we’ll reach the seventieth anniversary of the end of World War II (1945). A day that celebrated Peace. Of course, that peace came after sixty million people were dead, including over 400,000 Americans, many of whom are buried in Europe or the Pacific in cemeteries marked by rows and rows of white crosses.
It used to be that many such grave markers bore the initials “R.I.P.” for the Latin requiescat in pace, meaning, with the same initials in English, “rest in peace.” But I ask this morning, is that really peace? Can there be peace when someone lies in the grave—whether death has come violently in war or “peacefully” in one’s own bed? And what about while we live? Since the world never seems to live in peace, can we?

There is a bumper sticker that says, “If you love Jesus, tithe! Anybody can honk.” The Season of Lent calls us to that kind of serious self-examination and straight talk. That’s why a lot of people don’t like Lent. Doesn’t feel very peaceful to look at our long list of sins. This Sunday’s Gospel lesson is filled with straight talk from Jesus, including one of His harshest comments to anyone. Only the Pharisees, and perhaps Herod, received any stronger tongue lashing from Jesus than did Peter in this lesson. When Jesus told His disciples exactly what was going to happen to Him, a one-sentence history of the rest of His life — suffering, rejection, death, and resurrection — Peter scolded Him. Jesus, in turn, reprimanded Peter with these stern words: “Get behind me, Satan! For you are not on the side of God, but of men.”

Then Jesus called the whole crowd in on their conversation and said to them all: “If any man would come after me, let him deny himself, take up his cross, and follow me.” Do these words of Jesus bring you peace, make you feel good all over? Not me. The straight talk doesn’t stop there, but these words, which appear every Lenten season, are enough to swallow at one time.

First of all, I wonder if Peter heard any other word for a long time after “Satan.” Although I’m afraid Jesus may have thought that of me many times, I can hardly imagine how it would feel to hear Him actually say it. The rest of His comment to Peter is typical of us all. We are all so frequently “not on the side of God, but of men.”

God has claimed us as His children, proclaimed us to be His Church and His people, but we give in so easily to the pressure of the present. The “easy way out” is the choice we make far more often than the one of our principles. Peter knew that it would not be the best political move, or the most practical, for Jesus to go about His mission in the manner Jesus had described. He chewed Jesus out for being so foolish. I believe Peter thought Jesus was there to kick out the Romans, and not to let them kill Him.

The quick fix is a human invention. We think peace ought to be easy. God’s way is different. God’s plan to save Israel started when there was no Israel. It took Abraham almost his entire life to finally trust God, He tried at least a half-dozen exercises in “the easy way out” before that, but God was very patient. God does not choose to bull His way into our lives and force obedience out of us.

Taking the easy way out is just so common. The “Easy Way Out Party” is the most popular by far in politics. Many politicians join it. Oddly enough, the politicians we remember as the best are the ones who don’t do this, yet they are the rare ones. Have you ever read John F. Kennedy’s, Profiles In Courage? He wrote about the obscure senator from Kansas, Edmund Ross, who committed political suicide by voting against the impeachment of Andrew Johnson. Johnson himself was something less than the perfect president. Yet, in spite of all his failings, he was an honorable man. If he had been politically “smart,” he would have taken the easy way out, but he did not. Whether out of respect for his predecessor, President Lincoln, or because he really believed in Lincoln’s policy of reconciliation, he followed it without regard to the political consequences. Johnson came within one vote, that of Edmund Ross, of being branded a traitor. To follow the far more popular trend toward revenge would have been politically expedient. But Johnson was more concerned about his nation’s future than his own. For the sake of the country, those guys were willing to make sacrifices.

When passages about self-denial come up during Lent, we usually think in terms of “giving up” something for Lent. Jesus is not talking here about denying something to yourself, like the kid who gives up spinach or broccoli. He is not even talking about giving up something we love, like chocolate, or pizza, or coffee. Denying ourselves in order to follow Christ means placing our entire lives, all our desires, all our values and priorities under the Law for correction and under the Gospel for transformation.

There is no easy road to self-denial. In fact, Jesus ends His speech about this with cross-carrying! Anton Lang was an actor who played Jesus in the passion play at Oberammergau, Germany. A tourist and his wife went backstage following a performance to meet the actors and actresses. The tourist wanted to have his wife take a picture of him with the actor’s cross. When he tried to lift it up for his pose, he couldn’t budge it. It was pure oak. In amazement, the man turned to Lang and said, “I thought it would be hollow and light. Why do you carry a cross that is so heavy?” The actor replied, “Sir, if I did not feel the weight of His cross, I could not play His part.”

It is not surprising that most people don’t like penitential seasons or services. With a focus on self-examination, even self-denial, coupled with an emphasis on Jesus Christ’s suffering and death, Lent could hardly be described as pleasant. Yet, like this straight talk from Jesus, there is a very positive side. Deny yourself … take up your cross … and follow Jesus, this is the way of peace, of true peace. Jesus invites us, and the Holy Spirit enables us. We are invited to become the people we were meant to be.

From that perspective, the Season of Lent is not negative at all. It is a generous opportunity from our gracious Lord to get rid of all that makes us less than God wants us to be. Many of Peter’s actions recorded in the New Testament appear to be the actions of a young or immature man — brash, impulsive or unthinking. Jesus’ words imply, on the contrary, that Peter’s acts were thought out. The problem was Peter’s thoughts!

The root meaning of the word “Lent” is “spring,” a time when the world sheds the old and comes out again all fresh and new. We humans may participate in some shedding, but genuine spiritual growth is a gift from God. Let’s begin, as Jesus suggests, through self-denial. The thing to give up for Lent is anything that would claim our allegiance, everything that would distract us or take us away from God, from Jesus. He is here to empower and enable us.

It was not easy or wise for Jesus that He go to a cross and die. It was frightening, painful, humiliating and unnecessary! He didn’t do it for Himself. Jesus didn’t die for Jesus. You must know that the Son of God did not have to give in to the soldiers and let them nail Him to that cross. He had every power necessary, and every right, to overpower and overwhelm them. You must also know why He did not nuke them. You must also know why He submitted. You are the reason. And there we find peace.