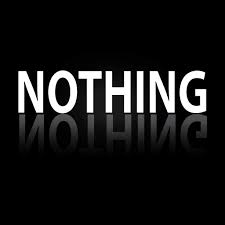 The story is told of a young child who wanted a bicycle more than anything else for Christmas. He began begging his parents and Santa and whoever else he could ask months before December for a bike. All his hopes were centered on this bike. His father, however, was a bit of a practical joker. So he found a very large box, large enough to fit a bicycle. An empty box. Do you see where this is going? On Christmas Eve, he wrapped it up and placed it under the tree. That young boy came down the stairs on Christmas Day and saw that box and he was sure, absolutely sure, he had a bike. Soon he opened that box but found it was empty. His reaction, of course, was to yell, “I got nothing, nothing at all!” Of course, his dad right away rolled the new bike out (that Santa brought) to give to his son. But the experience of “nothing” helps us understand the Scriptures we hear today. Today, with apologies to Jerry Seinfeld, your sermon this morning is about, “Nothing.”

Nothing, nothingness is a perfect picture of the state we are in apart from God’s love and grace (gifts). We are “nothing” in sin and our fallen condition. Without Jesus/the Holy Spirit, we are:
(1) Unable to please God.
(2) Unable to do what is righteous, what is right.
(3) Unable to prevent our death, get forgiveness/saved.

Even the Old Testament saints mentioned in Hebrews were great big nothings (vv 4–8).
(1) Abel was no big, strong hero; he was murdered by his brother. The only thing the Bible says he did was worship in faith. And get murdered.
(2) Enoch is commended not for his achievements but simply because God took him. (Bible Trivia here: the Bible tells us there are two people that God took directly to heaven without their physical bodies dying: Enoch and Elijah.)
(3) Noah is on this list because he reacted in faith, not because of his actual deeds. God didn’t take Noah to heaven because he built a good ark.
(4) Abraham had nothing; he wandered in a land not his own; he is listed here in the New Testament only because he had faith.

Do you know his story? Do you know what happened with Abraham? Remember, to this day, Abraham is a big deal. He is considered the main patriarch of the Jewish faith, and a hero of the Christian faith. When he first shows up in Genesis, God just comes to him in his land, which was Ur. Yeah, Ur. And Abraham didn’t worship God or believe in God at that time. Ur was a land that had no one worshiping the Lord. But God still picked him and told him to go to the land of Canaan with his wife, Sarah, and someday they would be the parents of a great nation and have descendants as many as the stars in the sky.

Now we talked last week about God coming out of nowhere with a big announcement. Imagine how Sarah must have felt when Abraham comes home for dinner and tells her that some God none of them believed in told him they all have to move and go to a foreign country, just because HE said so. But they did it.

And Abraham had some adventures. Sarah was a good-looking gal, and twice they were in areas where Abraham was afraid the people there would kill him to get Sarah, so he told people she was his sister. He did this twice!

Abraham also asked God to spare the cities Sodom and Gomorrah because his nephew Lot lived there. God sent an angel to save Lot and his family but destroyed the cities because of their sins.

If you know Abraham well, you know that Sarah was (apparently) not able to have children. Yet God promised to give him a son. After many years passed, and no baby, having a son seemed impossible due to the old age of Sarah. Sarah then had the idea that Abraham have a child with Sarah’s servant, Hagar, and no, nobody called her Hagar the Horrible, but she was pretty horrible to Sarah after she gave birth to Ishmael. This led to Abraham suffering for that sin because Sarah blamed him for all this (and it was her idea in the first place.). God kept His promise, though, and Isaac was born when Abraham was 100 and Sarah was 90.

Another thing that happened to Abraham’s was God telling him to offer his son Isaac as a burnt offering to prove his faith. Abraham obeyed this command, bringing Isaac to Mount Moriah and laying him on the altar. At the last moment, God told Abraham not to kill Isaac and gave him a ram.

The thing of it is, when you read about Abraham, while he is considered a hero of the faith, he did a lot of stupid things. Sinful things. And that’s the way it is with the folks in the Bible…they are sinners just like us. And there is nothing they did, or we do, to get saved by God.

God calls us out of nothingness to faith in Him. The universe was created out of nothing by the Word of God, You may recall, if you were here, that a few weeks ago we talked about Adam and Eve and creation, and I reminded you that God broke all the rules of physics that He instituted when He created the whole universe with His Words. He made this whole thing out of nothing.

This is also a picture of how we come to faith.
(1) God calls us by His Word.
(2) We do nothing but hear and receive that Word.
(3) The Good News that Jesus Christ has died for our sins is delivered to us and the Holy Spirit pulls us out of the nothingness of our sin to new life. Faith is something HE DOES in us.

And so we note that the account of Abraham shows that this faith results in good works and obedience (vv 8–12). Abraham was a “nothing”; so was Sarah. They did not even know where they were going. Yet faith in the Word of God led Abraham to obey, to follow the Lord’s calling. He left his homeland and went to Canaan. That obedience is a result of faith.

In the same way, God calls us to follow Him. We are to follow the example of the dudes in our text. Each Old Testament saint is shown as following God and being “commended” (v 2): Abel, Enoch, Noah, and Abraham. They are commended for their faith and trust in God. This faith leads them to follow God in righteousness and obedience. Each one finally gets to the end of his journey and receives peace and eternal joy.
Abraham’s earthly journey is a picture of the journey through which everyone who lives by faith goes. We have nothing of our own to show God, no goodness here. Yet God calls us by the Gospel and gives us new life. He is the One who sent His Son Jesus to live for us, die for us, and rise again for us. We have been given faith, forgiveness, and eternal life. All GIFTS. Remember, faith is something God does, God gives, it is not something we do. We then live this way in thanks for what He did for us. We live that life by the Holy Spirit. We are led by our Lord to the promised land of heaven. “Strangers and exiles,” we find our home in the eternal presence of the God who guided us through this life (vv 13–16).

Nothing is a pretty bad place to be. Having nothing is no fun. Being a nothing is even worse. But we have a God who out of nothing has created a better place for us, a promised land. In fact, He called the entire universe into being out of nothing. And as if that isn’t enough, God Calls Us out of Nothing to Trust His Promises and Follow Him to the Promised Land, knowing that all our sins are gone, and full joy awaits us. God gives us way better than a new bike. Because of God, no one here is nothing. You are all something because He created you and saved you. He gives us Love and Life.