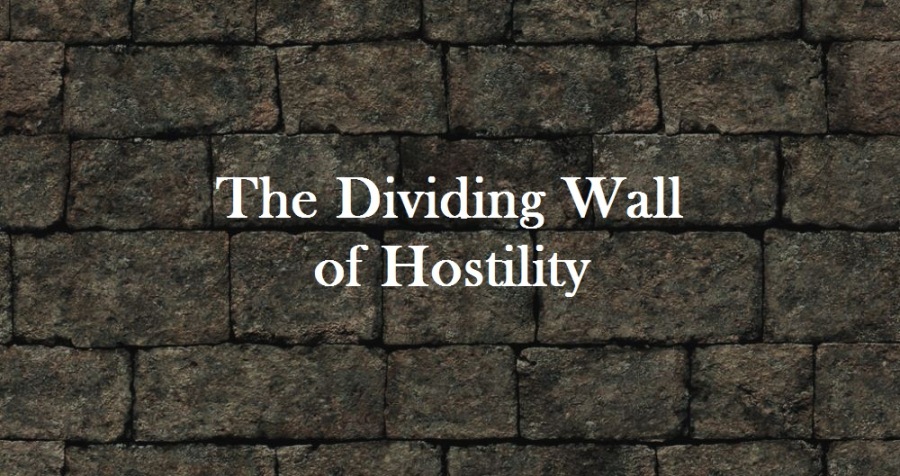 Today, we start with some poetry. Can I get an Amen! I know…you’d probably rather hear another story about my trip to Germany, right? Here we go…poet Robert Frost once wrote, “Something there is that doesn’t love a wall.” Easter tells us that there’s also someone who doesn’t love a wall: Jesus. This morning, we will discuss how there should not be walls in our churches, and I pray that you, too, will find yourself not liking such walls and let Jesus build us into a temple instead of a wall. Here’s the good news: Jesus Christ Can Demolish Today’s Walls of Separation.

First, the good news: Paul says the dividing wall of hostility has been torn down. This was long before you or I took our first breath. It happened when Jesus died. Every Sunday we rejoice that Jesus died for the forgiveness of our sins. Every Sunday we rejoice that His resurrection opened the gates of heaven to all believers. We are so happy to receive every single gift that His death and resurrection gives us. “Now in Christ Jesus you who once were far off have been brought near by the blood of Christ. For he himself is our peace, who has made us both one and has broken down in his flesh the dividing wall of hostility” (vv 13–14).

Unfortunately, the Church has not always gratefully received this broken-down wall Paul talks about. Maybe it’s because when that wall fell, the onrush of Gentile Christians crowded out the Jewish Christians so that we can’t really identify with the hostility of which Paul speaks. (2013—1.6 million Jewish Christians in the USA) In case you are not aware, the Jewish Christians in the first century believed you had to be Jewish first, then Christian, to be saved. God said that wall was not there. The Jews said it was. The Gentile Christians then had a rough time. We’ve never experienced being treated like second-class citizens in the kingdom by those who identified themselves as “the chosen people” and were quite proud of it. Maybe it’s because our men were never told they had to be circumcised before they could join the ranks of the saved. Maybe it’s because we were never told that we had to abstain from pork, shrimp, or lobster if we wanted to be citizens of the kingdom. Maybe it’s because we were never told that we had to sever our ties with unbelieving Gentile friends and family because they would contaminate us. There’s never been a time when we haven’t had access to God through the Holy Spirit. The wall Jesus demolished is a wall we never saw standing! For that, we can be grateful!

But now let me ask you this—what happens to a city when an invader knocks down the wall that protects the citizens inside and the invaders take over that city? Do they leave the wall in ruins? No! They immediately rebuild it, so they are safe from the next invader! (Rothenberg)

Which brings me to the problem that we face. Paul says that Jesus knocked down the wall of hostility. That wall consisted of various things that separated Jew from non-Jew—all the dietary and hygiene-related laws that gave Jews their own unique identity. If Jesus destroyed that wall of separation and made out of the two groups an entirely new thing—a human temple, a unified residence for the Holy Spirit—why has the Church been rebuilding that wall? Why have Christians established new rules or categories or groupings that have re-created feelings of hostility? Why has the Church rebuilt an “us versus them” mentality?

One answer I can give for this is fear. We drag the fears that we have out there into here. We come through those doors carrying those fears with us. A certain congregation feared the changing neighborhood around them. They wouldn’t even allow a second service in the language of the neighbors because they feared their neighbors would eventually outnumber them and “take over” the church. Oh, and it’s not just a wall based on ethnic origin. Dr. Martin Luther King Jr. once said that the most segregated hour happens at 11 a.m. on a Sunday morning. But it’s not just a “separate but equal” separation based on skin color. It’s also a wall based on generational differences. Does a church paying a lot of attention to Millennials because they are desperately wanted there mean that they welcome older generations? What about the wall that exists where the community views a certain church as “the church for the rich people,” and what if the people in that church act like it, too? And what about the church whose preaching clearly says that it welcomes Republicans but not Democrats, or vice versa? You see, fear is not the only motive for rebuilding the wall; a desire to be surrounded by people like us is also at work. We like to be with people who are like us.
And while each of us has our share of the blame for this, St. Paul’s words make us uncomfortable. Where does one find a cure for fear? Where does one find real security, real harmony, real unity? The way to find those things is not in building a wall. God says so.

Jesus Christ is our peace! Our unity! Our solution! The apostles and disciples of Jesus are the foundation, not for the wall, but for the holy temple that God’s people are meant to be.

How can the Church address this problem? Out there people are shamed into change. Out there laws are passed to bring conformity. In the Church, we don’t do the things people do out there. In the Church, when there is a problem, and this is a problem, we begin with repentance. We begin with confessing that God is not pleased when we try to replace a wall that His Son blew up with another wall. It means confessing that when we have been wall builders, or when we have allowed such wall building with our silence, we have sinned. Jesus Christ is our peace. Our unity. Our solution. To Him, we go for healing and forgiveness. We have to turn to Jesus to fix this.

Later in this letter, Paul urged his readers to be “eager to maintain the unity of the Spirit in the bond of peace” (4:3). What does that mean? Well, it doesn’t mean that we try to eliminate differences in people, whether it is skin color, ethnicity, economic diversity, or political thought. There will always be people different than us. It doesn’t mean that we only try to get along better. (Sounds like a New Year’s Resolution) But it means that we go to God’s Word and get God’s Wisdom on this. In other words, if such differences do not matter to Him, why should they matter to His people? To us?

So as Paul says in Romans, “Welcome one another as Christ has welcomed you” (15:7). Just as Jesus welcomed you into His family in Baptism, forgiving your sins, giving you peace, promising you eternal life in His name, so He has welcomed every other person who believes in Him. He didn’t say no to those who have or don’t have tattoos; He didn’t say no to those who drive or don’t drive a Mercedes. He didn’t reject or welcome only Germans, African Americans, or those from south of the border. What He does want us to do is repent by no longer thinking those things are important. What He does want is that we stop thinking that those things matter. (Church vs. At Work…Social Media…Neighborhood) In his Letter to the Colossians, Paul tells us clearly what we are supposed to do: “that in everything [Christ] might be preeminent” (Col 1:18). We are supposed to find our security and our unity in Him!

In June of 1987, when he visited Berlin, President Reagan challenged the leader of the Soviet Union, “Mr. Gorbachev, tear down this wall.” Spray-painted on that same wall were these words: “This wall will fall. Beliefs become reality.” Eventually, that wall came down in 1989. When Christopher and I went to Germany, we saw the remnants of that wall. We saw Checkpoint Charlie. We saw the little shops where people sold stuff from the DDR, people who missed those days!?!

That wall came down. Belief became reality. What about our walls? Will belief eventually become reality for the Church, too? The Spirit is still at work changing hearts. Jesus still died and rose for us. Jesus is still on His throne. Jesus still forgives and empowers us. John’s vision of a multitude no one could number from all tribes, languages, and races still stands. In our day, it is my prayer, that belief will become reality once again and all the walls of division come tumbling down in here. We are all one who share The Faith in Jesus Christ.