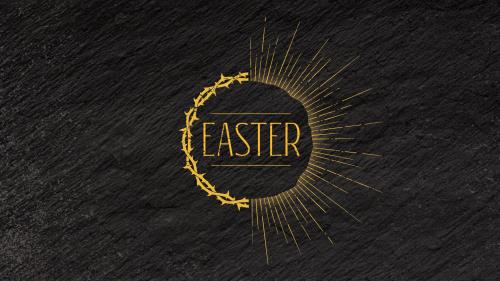 Well, here we are gathered today, on this very festive occasion. We all know why we are here. This date stands prominently on our calendars. Today was my mom’s birthday. If she was still with us, she would have been 91.

No, of course, the reason why we are here today is that it is Easter. Today is the day, the best day, the biggest day because it is the day that Jesus rose from the dead.

Now I also realize that today is April Fool’s Day. My mom told me more than once how her classmates gave her the business back in the day because her birthday was April 1. When I was a kid, I would always forget, and someone would sucker me into believing something dumb.

What was the best April Fool’s prank you ever saw/did? I still maintain the best one was in 1985 when the editor of Sports Illustrated noticed they would be publishing an issue on April 1. He asked George Plimpton, a famous writer and booster of participatory journalism, to write something special for that issue. Plimpton created the story of a guy in the New York Mets organization who was into yoga, French horn playing, and could throw a baseball 168 miles per hour with complete control. The name of this fictional pitcher was Sidd Finch. Sounds crazy, right? But people believed it: General managers, baseball press, lots of folks. But in the end, it turned out to be a big lie.

There are a lot of people out there who realize there are many people who believe in Jesus, but they think what we celebrate is a big lie. This is not a lie. Today we celebrate the fact that Jesus did not stay dead. The Lord is Risen! This is not an April Fool’s.

Let’s first set the stage here. On Friday afternoon, Jesus had been crucified. He died before sundown, which was the beginning of the Jewish Sabbath. Joseph of Arimathea, a member of the Sanhedrin, asked Pilate for permission to bury Jesus, which Pilate gave to him. Joseph quickly got the basic stuff to bury Jesus, and placed Jesus in a tomb, with the ladies in attendance. Because the Sabbath was approaching then, the ladies had not had time to prepare Jesus’ body for burial. They were not allowed to buy any of the materials needed to do that on the Sabbath, so they had to wait for the Sabbath to be over. That would have been sunset, Saturday night. People don’t usually go to cemeteries at night, so they waited until sunrise the next day, Sunday morning.

And so it was that early on this historic day, Mary Magdalene, Mary the Mother of James, and Salome went out to the tomb to anoint Jesus’ body. While they were on the way, a thought occurred to them. They were not strong enough to roll away the tombstone. Who would they be able to get to do that for them that early in the morning? But as they approached the tomb, they looked and saw the tombstone already rolled away. They probably thought that for them, this was good fortune, and so they went into the tomb. But the fact that the tomb was open was not to be the only surprise they would get that morning. When they went into the tomb, instead of finding Jesus’ body, they found an angel of the Lord. And they were alarmed. We would be too, in their position. But the angel told them, “Do not be alarmed.” And then he told them the absolute best, truest thing anyone has ever, EVER said. The angel said, “You are looking for Jesus of Nazareth, who was crucified. HE HAS RISEN! He is not here. See the place where they laid him.” He was not there of course. “But go, tell his disciples and Peter that he is going before you into Galilee. There you will see him, just as he told you.”

Here they are folks, the first people to be told of the resurrection of Jesus Christ. Were they filled with joy? Did they dance with glee? Did they throw a party? Nope. They ran from the tomb, afraid. Now we, with our hindsight, may be tempted to criticize these gals for this reaction, but we have no right to. I doubt we would have been any braver or less afraid than they were. After all, they all had a tough week. They had seen their good friend, their “brother” if you will, Jesus enter Jerusalem with thousands of people singing His name, only to have that crowd turn on Him and ask Pilate to crucify Him five days later. They had had to watch Jesus suffer His agony on the cross. They were sad. They were heartbroken. They were prepared for a funeral. And while Jesus had made it plain to them He was going to rise again, that death would not hold Him in its grip, the news that He fulfilled His promise was another sign they had witnessed of God acting in this world. Witnessing God’s power can bring fear to us, don’t you think? Remember at the Transfiguration when Peter, James, and John saw Jesus standing on that mountain in His heavenly glory, Peter, James and John were scared then. So these women were filled with awe and fear at the sight and the thought of God’s almighty power. They went into a tomb, met an angel, and got scared. And I think we can identify with that.

Now you can be sure that this really happened. This is no lie. This is no April Fool’s. What we speak and witness to is no con job. It is the most cosmic-changing event the world will ever know, this resurrection of Jesus. Because He rose, the sting of sin was taken away, death was defeated, Satan was dethroned.

The angel proclaims the empty tomb. Christ is alive! He is risen! He is risen indeed! I can offer you here some facts if you run into someone who thinks Easter is just one big April Fool’s. Here is some evidence for the resurrection that tells us that all this is most certainly true.

1. The temple guards had a vested interest in not letting the disciples steal Christ’s lifeless body. They knew that if the grave were found empty, it would change everything forever. If they had really let someone steal Jesus’ corpse, they would have been killed (dereliction of duty). But they weren’t. They were bribed to keep their mouths shut. (It’s in Matthew, look it up.)

2. Women were not considered viable witnesses in a Greco-Roman court or in first-century Judaism. If this was all made up, they would not have used women to be the first witnesses and proclaimers.

3. The “myth” of the resurrection could have been put to rest by anyone, ANYONE, producing Jesus’ body. 2000 years later, no one has.

4. Very few of us will die for the truth. Who among us, and among the apostles, would be willing to die for a lie? Anyone? Do you think Peter and those guys would die for a lie? They were tortured, butchered, crucified, impaled, flayed, beheaded. To stop the pain, all they would have had to do was say, “We made it all up.” None of them did.
Why? Because Jesus is alive! He is risen! It happened.

I wish to end our time together by telling you this. I do not know if you are aware of this, but this weekend, the Oklahoma Atheists are hosting the National Convention of the American Atheists at the downtown Sheraton hotel. Exciting huh? Well, I gotta tell you, I think they picked this weekend because it is Easter. To “counter-demonstrate,” as it were. Well, we know what to do, to say to these folks.

1. We love all our neighbors, even atheists.