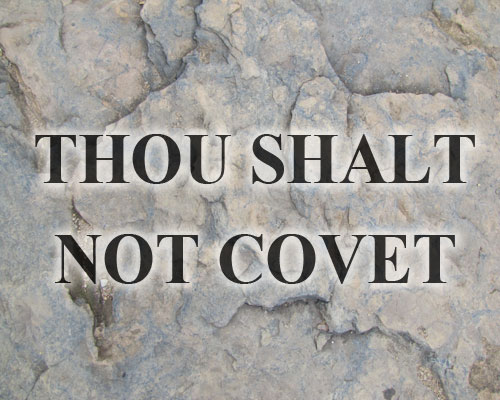 Today we are going to talk about coveting. That is a word we do not use much these days, but you know it when you see it. For those of you who like technology, you know how it works. A TV goes from 480 to 720 to 1080p. As they get better, you want the newer, better one. Phones used to be just for phone calls. Now each time a smart phone comes out that has a bigger or sharper screen, better sound, sharper camera, everyone wants one. This year for Christmas Microsoft and Sony bring you the XBOX One and PS4, promising better games, sharper graphics, more gaming power. And millions will covet those as well.
This becomes a sin when coveting is desiring something to which you have no right, something that belongs to someone else. Covetousness is at the heart of all sins. Violating the ninth and tenth commandments almost always lead to violating more. As Jesus clearly said, “Out of the heart come evil thoughts, murder, adultery, sexual immorality, theft, false witness, slander” (Mt 15:19).

Coveting is basic in here, it is basic human selfishness. We want what we want, and we don’t care who gets hurt or left out in the process. We think happiness is our right, and we will get it. Do we not believe this at times? In the original draft of the Declaration of Independence, Thomas Jefferson wrote that each person had inalienable rights to life, liberty, and the pursuit of possessions. In subsequent revisions, the wording was changed to the pursuit of happiness. Yet our society has come to identify the pursuit of happiness with the pursuit of possessions. We think we will be happy if we have one more thing.

I read about a pastor who went to a new church and in that church there were three couples who were really struggling because they had to have nice houses on the nice side of town, even though they really couldn’t afford it. Within months, all three couples were getting a divorce. Their pursuit of the “nice home” cost them their relationships. Perhaps they were unhappy in their original home and thought a new home would make them happy.

We recognize this pursuit in young children. Buy them a new toy, and they are bored with it after a few hours. They want something new. We see it in us. We buy the 60 inch plasma TV, and then see someone else with a 15 foot wide screen and we wish we had that. But these new things we get do not bring peace here. We may like them, find them useful at times even, but they bring no real peace in here. The fact that we know getting more does not buy us happiness is not a new thought. The ancient Greek philosopher Epicurus put it this way: “If you want to make a man happy, add not to his possessions but take away from his desires.” In other words, want to be happier? Desire less, instead of buying more.

Now do not get me wrong here. Desire in and of itself is not sinful. The Bible tells us to “desire the greater gifts” (1Cor. 12:31), “be eager to prophesy (1Cor. 14:39), and “never be lacking in zeal but keep your spiritual fervor” (Rom. 12:11). You should have ambition, no matter how young or old you are. It gives you energy and purpose. There’s nothing wrong in wanting more, but God wants these things to come to us from using the abilities He has given us. We are not to lie, cheat, or steal to get what we want. Wanting what we don’t have too much, wanting what belongs to someone else, can be a danger here in us.
I read about a guy who laid a small circle of poison around a hill of stinging ants. Thinking the tiny granules of poison were food, the ants began to pick them up and carry them throughout the colony. He returned later to see how well the poison was working. Hundreds of the stinging ants were carrying the poison down into their hill. Then he noticed some of the poison was moving the opposite way–away from the hill. Some smaller, non-stinging ants had found this “food” and were stealing it from their ant neighbors. Thinking they were getting the other ants’ treasure, they unwittingly poisoned themselves. When we see someone with more than we have, we must beware. The hunger to lie, cheat, or steal our way into what is theirs may poison us spiritually.

In Jesus’ parable of the rich fool (Luke 12:16-21), the farmer was not wrong to produce a huge harvest. He was not wrong to build big barns to store them. He was wrong to call them “my crops,” “my grain and my goods.” As Jesus said in the parable, “The ground of a certain rich man produced a good crop.” God blessed him. God entrusted these blessings to him and expected him to use them accordingly. They were not given to him by God for his selfish enjoyment.

Instead, the rich man thought only of himself. He did not think of the needs of others and of God’s kingdom. He said to himself, “You have plenty of things laid up for many years. Take life easy; eat drink and be merry.” God’s problem with him was he was not content, and he was selfish.

The foolish man in the parable desired the wrong thing. He coveted what was foolish and temporary and selfish. All he wanted out of life was riches and leisure. So “God said to him, ‘You fool! This very night your life will be demanded from you. Then who will get what you prepared for yourself?’” (Luke 12:20). He foolishly forgot that one day he would have to give an account of his life and his possessions to God. Jesus concludes the parable by saying, “This is how it will be for anyone who stores things up for himself but is not rich toward God” (Luke 12:21).

Some people think condemning this guy means God does not want us to be happy. He was not wrong to “be merry.” God wants us to be happy. God wants to give you heaven. He offers it to you. Jesus said, “Everyone who looks to the Son and believes in him shall have eternal life” (Jn. 6:40).

As Luther explains for Number Nine, “We should fear and love God so that we do not scheme to get our neighbor’s inheritance or house, or get it in a way that only appears right.” And for Number Ten, “”We should fear and love God that we do not entice or force away our neighbor’s wife, workers, or animals, or turn them against him.” As in the other commandments, the accent is on the positive attitude of serving one’s neighbor, “help and be of service to him,” and “urge them to stay and do their duty.”
Therefore, rejoice! And be content! Even now we have the “peace that surpasses all understanding.” Even now you are blessed by God. We have no right to those blessings. We have rebelled and failed and disobeyed. All the commandments reflect this. Yet the guilt for our sins was nailed to the cross with Jesus. He rose in victory, and He takes you to be His own now and for all eternity.

What do you eagerly desire in life? Where is your focus? What proceeds from your heart? Where are you looking for happiness? Whom or what are you trying to serve? What is your ambition? What is your passion in life? Is it money wealth, power, fame? Or are your energies directed towards helping and serving others? You know what God’s plan is for you. So be content. Live to serve and live to love, not for money or things. Live to Give, not to get. It is the will of God, and the way of true peace and contentment.