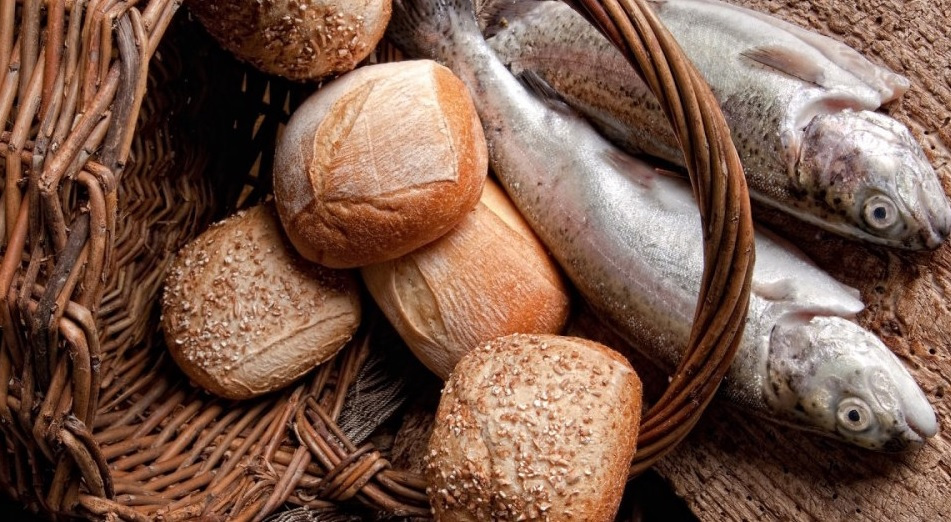 How many pictures do you have? It occurred to me recently that the pictures on my phone had never been put in my computer or the cloud, so I did that. Had about 3100 pictures from the last 5 years. Most were taken in Alaska and Germany.

They say a picture is worth a thousand words, and, well, if the picture is of Jesus, maybe it’s worth a million words. So today while we listen to Jesus and His Word, let’s watch, too, and see what the picture is worth. In our text, Jesus has been teaching for a while, and many have heard. Jesus has talked about: Sowers. Seeds. Nets. Treasures. You know. The text now shifts from listening to watching. Jesus is doing miracles. Let’s Watch Him at Work.

Matthew opens this section by showing us the reaction of Jesus to some pretty terrible news. If you had been close enough to see but not close enough to hear, you would have known that the news was bad just by seeing the posture of Jesus change. He is a man who often carries heavy burdens, but no matter how accustomed Jesus has become to hearing bad news, bad news strikes Him like it strikes you and me. Jesus hears that John the Baptist—you know, no one greater, the Elijah who is to come, the sight to be seen in the desert, the baby jumping in the womb, most likely his cousin of some kind, that one—he’s dead. He was killed. Herod had him executed. Jesus is upset, and I’m sure that He showed it. We don’t hear what He said, if He said anything, but we do see what He needs: we see Him walk away (Float away, really) to spend a little time by Himself, alone to pray. Well, alone enough, because, of course, we know Jesus is never really alone, just as we’re never really alone, because God is with us wherever we go. So Jesus goes off sad with head hung low. But we do see, as He walks away, that it is definitely okay—and more than okay—sometimes to drop everything to spend a little time leaning on God. What’s the picture here? See Jesus pray.

The next time we see Jesus, He sees the crowd gathering around Him. I’m not sure how long He actually got to spend in prayer, but I’m sure it didn’t feel like enough. A crowd has gathered, a BIG crowd really, five thousand people at least, depending on how you count. I’m not exactly sure why they’re there, why they’re there again. They might be there because they heard about the Baptist, and there was a rumor that Jesus is John resurrected. I don’t know. Could be. They might be there to hear more of Jesus’ teaching. Jesus has just finished that long section of teaching, and maybe they’ve come back for more. It could be that they’re here because they want Jesus to heal them or lead them. I don’t know exactly why they’re here, but they are, and you can imagine the sight. Can you see five-thousand-plus people gathering in the wilderness and trying to get closer to Jesus? No stadium seating, no microphones, but they are there. What a logistical nightmare.

Had I been Jesus, I might have stayed in the boat and hoped the ushers would take care of it while I “prayed.” Of course, I’m not Jesus. Jesus accepted this interruption and stepped from His boat into a sea of humanity. He shows compassion on the crowd that’s gathered around, and we see Him start to heal the sick that are among them. How do you picture Jesus healing the sick? What does a person who’s caring for thousands look like? I’ve seen hosts work frantically with what seemed like eight hands and arms just to take care of ten people on Thanksgiving, but five thousand with all their different needs? How do you do that? It is an amazing picture, an ordinary-looking man—whom we, of course, know to be the not ordinary Son of God—healing and caring for this big bunch of people. What’s the picture here? See Jesus heal.

Obviously, Jesus isn’t the only person to notice this huge crowd and their many needs. Matthew shows us now the perplexed faces of the apostles of Jesus as they try to problem-solve without Him. You can see them, right? Jesus’ 12 dudes, always insightful(?), always perceptive(?), huddling together with stress in their faces, as they try to crunch and recrunch the numbers, but it never works. The 12 saw that the day was dragging on and the sun was lower in the sky. They saw a couple of people in the crowd rub their stomachs because dinner time was here and there wasn’t anything around. They saw the needs of the people, and they saw their own inability to care for them properly. Finally, one of the disciples, who was either the brave one or just the one to draw the short straw, he comes up to Jesus and says, “Jesus, we happened to notice that there are an awful lot of people out here, and you may not have noticed, but we have noticed, that they really didn’t seem to remember to bring dinner, and there isn’t a Golden Corral for miles, no one brought their Sam’s card, and we are outside the radius of every pizza delivery joint in the area, so we just don’t know how to feed these people. You gotta send them home.” I picture Jesus as still busy, healing the sick. He doesn’t even have to look over his shoulder to see the faces of His disciples when He says, “Don’t send them home. Don’t send them away. You feed them.” “Well, Jesus, I just don’t think you’re fully grasping the difficulty of this situation. You can flip the calculator any direction you want; the numbers don’t lie. We only have five small loaves (small, think five servings) of bread and two little fish.” Can you blame them? I can’t. (Latch Key Story) What’s the picture here? See the apostles panic.

Then Jesus stood up and took the bread and broke it and gave it. Get it? Sound familiar? (Be careful, this was not communion.) Jesus had settled the crowd, had them sit, and then He held this humble food up toward heaven, said a blessing, and broke the bread. Then He gave it. And would you believe…everyone ate to his or her satisfaction, and the disciples even gathered more than they started with. This is a miracle. What do you think the people who were gathered there thought? What did they see? Did they know that a miracle had just occurred—a miracle that would be talked about for thousands of years? Do you see it? The meal itself seems boring/dull—not prime rib and onion rings, not Chicago style pizza, not a big pile of crab legs, just bread and fish. But this is an actual glimpse of God. Jesus changes everything. He smashes the disciples’ best efforts at multiplication and the cynics’ best efforts at explanation. He changes the rules of the natural order of things when He feeds five thousand with such meager groceries. What’s the picture here? See Jesus cook.

Now I want you to picture Him in your life. Where have you seen Him working through simple things, offering you a glimpse of the kingdom? Because He is; I promise you He is. Jesus Provided Then with Simple Means and Miracles and He Still Does That Today.

Have you seen it through the simple but kind words of holy comfort spoken by a loved one at the right time? Is it in the memory of when He claimed you here, with water and word? Is it in the small meal of a little bread and a little wine that is given to you for forgiveness, for life, for salvation? In this life, you and I need all of those moments when God feeds us and touches us and forgives us, because this life is filled with the pain that we can’t handle and diseases that we can’t understand and heartache and hunger that we can’t overcome alone.

But the promise of Jesus is that we aren’t alone. Because the Jesus who was crucified for our sins—He looked so ordinary hanging there—died with the promise that He would conquer death, and in His resurrection, we have forgiveness and eternal life. Hanging on the cross, alone, arms spread in giving, eyes pointed heavenward praying, carrying the weight of all, sacrificing Himself to take up your burden. What’s the picture there? See Jesus die, and rise, for you.

Until that day when we celebrate the feast of always enough, we gather around the simple places where Jesus promises to feed us, with enough to carry us through in simple things like His Word and promise. See Him work again and again. See Him in bread, wine, and water. That’s I want to leave with you today. Get the picture?