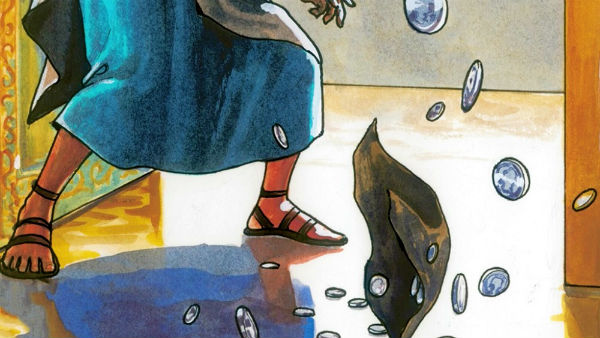 “What in the world has gotten into him?” That’s our response to someone’s behavior that seems suddenly out of character. Maybe a sweet, mellow person flies off the handle, lashing out at everyone in the way. Or at the other end of the spectrum, the office grump goes about his work whistling happily and greeting everyone in a friendly manner. The person isn’t himself anymore. “What’s gotten into him?”

We probably all know the story. We know that Judas was one of the disciples who for some reason became disenchanted with Jesus; maybe because he got scolded, maybe because Jesus wasn’t turning out to be the Savior Judas had in mind.

The Bible doesn’t tell us exactly why Judas betrayed Jesus, so we speculate (2 most popular theories). But for whatever reason, Judas secretly met with the chief priests sometime before the Last Supper and agreed to hand Jesus over to them. He promised to do it when no crowds were around. He’d do it for thirty silver coins, the going price of a slave. Then we see Judas with the mob that’s come to arrest Jesus in the Garden of Gethsemane. With a kiss he identifies the Savior, and Jesus is led away.

It seems that Judas spends the rest of the night traveling around Jerusalem with the mob as Jesus is dragged from one official to another for hearings and trials. Finally, the Sanhedrin, the council of ruling elders and priests, decides Jesus is guilty—of what, we’re not quite sure, since the charges and testimony keep changing—and Jesus is handed over to Pilate, the governor.

This is where the text for today begins. We’re told that “when Judas, his betrayer, saw that Jesus was condemned, he changed his mind and brought back the thirty pieces of silver to the chief priests and the elders, saying, ‘I have sinned by betraying innocent blood’ ” (Mt 27:3–4). Then follows the account of Judas returning the money and going out and hanging himself.

And here we encounter the first element of true repentance: true repentance is admitting you did wrong. Does anybody doubt for a minute that Judas sincerely and fully admits the wrong he’s done? I don’t. What else could Judas have said? “I have sinned by betraying innocent blood” (v 4). This is as full and complete a confession as anyone could ask for.

Many confessions are really nonconfessions. A politician may be accused of wrongdoing, but when he finally makes a public statement, his confession addresses everything except his accusation. “I’m sorry if my actions offended anyone in your community,” he says. But he means, “The problem’s not with me, it’s you.” Or, perhaps more often, confessions express more remorse over being caught that remorse over doing wrong.

Not Judas. He gives a full and complete confession, specifically stating what he’s done wrong. “I have sinned. I have betrayed innocent blood.” That’s the sort of confession that’s needed if it’s to be true repentance, no “if, ands, or buts,” no justifying, no excuses, nothing but specific and sincere disclosure. On that score, Judas gets an A. But true repentance is more than just admitting you did wrong.

True repentance is making it right. After confessing his sin in specific terms, Judas does what he can to make amends for what he has done wrong. He makes a sincere effort to return the money he took for betraying Jesus. “What I did is wrong. Here is the money you gave me,” says Judas, or something to that effect, when he tries to give the money back to the priests.

Restitution is a biblical principle. You return what you stole; you pay for what you broke; you compensate the owner for the value of livestock or slaves you killed. Every good parent teaches his child to make restitution for anything the child steals or damages. If you’re playing baseball in the street and you break a window, you don’t run away. You go up to the house, you tell the owner you did it, and you arrange to pay for the window.

No one made him admit his wrong. He listened to his conscience and voluntarily confessed his sin. And no one dragged him back to the chief priests to return the money. He decided that on his own. He could never undo the pain and suffering he caused, but he did the next best thing—he voluntarily returned the money. And since the priests wouldn’t take it back, he threw the money into the temple.

So far, Judas looks pretty good, doesn’t he? Maybe even better than Peter. We don’t have any record of Peter admitting his wrong or trying to make things right. But Peter ends up being one of the foremost leaders of the Christian Church, and Judas ends up on the end of a rope. What’s the difference?

The Small Catechism says, “Confession has two parts. First, that we confess our sins, and second, that we receive absolution, that is, forgiveness” (Luther’s Small Catechism, p. 26). The first part of confession is admitting wrong and making things right. But the first part is no good unless the second part follows. Judas confessed his sin to the priests. He returned the money, though they didn’t want it. But he never imagined that the Lord, against whom he’d sinned, might ever forgive him. I don’t doubt for a minute that if he’d gone to the cross and clung to the bloodied feet of the Savior and said, “Lord Jesus, forgive me,” that Jesus would have forgiven him. Of course, Jesus would have done that! He forgave the soldiers who nailed him there. He forgave the mob who hurled their insults at Him. He forgave the thief who hung dying on the cross beside Him. Forgiveness of sins is the whole purpose of Jesus’ coming!

If Judas, even Judas the betrayer, whose actions were foretold in prophecy, who is called “the son of destruction” (Jn 17:12), if this Judas had sought the forgiveness of Jesus, it would have been granted him, fully, richly, freely, graciously. But he doesn’t. The last act of Judas is to reject the grace of God, the forgiveness that could have been his, and hang himself.

How different from Peter! Peter behaved just as badly, and his sinful actions were motivated by the devil just as those of Judas were. Satan enters Judas and leads him to betray Jesus to death. Peter at one point refuses to let Jesus die, and Jesus tells him, “Get behind me, Satan!” (Mt 16:23). All sin is of the devil, but all sin, whether it’s the sins of Judas, Peter, you and me, will be forgiven if we trust Jesus Christ. And Peter did, and we see Jesus forgiving Peter at the end of the Gospel of John with the whole “Do you love me…feed my sheep…” discussion.

Lent is about repentance. May this season not pass by before each of us admits our sin and does our best to make things right, but, most important, trusts Jesus to save and forgive us, since He died and rose again for us.