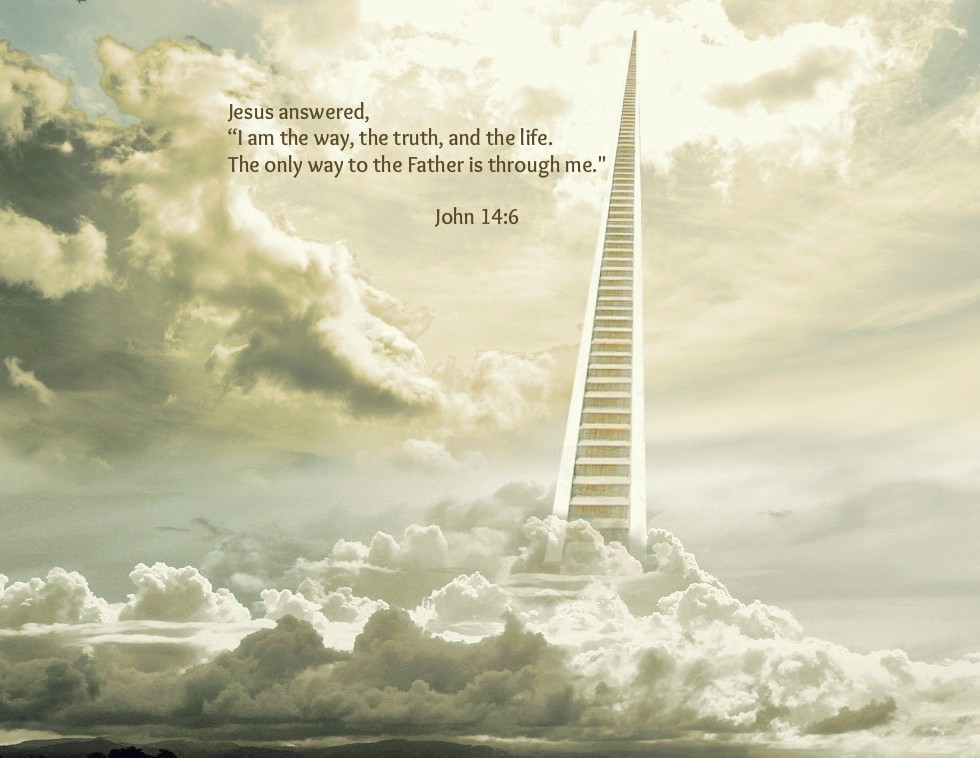 (The last illustration in the sermon audio was “borrowed/inspired” from the Lutheran Hour, May 19.  Rev. Seltz preaching.)

There are times we hear someone say something, and we go: No way.  Brett Favre says, “I retire.”  Al Gore says, “I invented the internet.”  Donald Sterling says, “I am not a racist.”  Doc Rivers says: “We got robbed because of that call.”

There are things Jesus said in the Gospel today that could lead to that sort of reaction.  There are folks who hear Jesus and think: “Where does a nobody carpenter from a no-where place like Nazareth in no-where Galilee get the gall to make a statement like, “I am the way and the truth and the life”?”  Does Jesus really have access to the Father’s house?  Can He really take us there?  In today’s Gospel Jesus makes statements that ought to take your breath away because of their boldness, and their scale.  Either they are true, or Jesus was a lunatic.

I can say that because He thinks He is the Son of the Heavenly Father, the Son of God.  Jesus backs up His claim, both here and throughout the Gospel of John, with statements and deeds that make a simple point: all that the Father is and does is demonstrated and shown in Jesus.  Today we are going to see the proof of the old saying, “Like Father, Like Son.”

There are people in our world, people in our neighborhoods, maybe people here in this room who wonder why we should believe that Jesus is God.  A lot of people look at Jesus as an unusual teacher or a man of wisdom, but go no farther.  But why should we think that Jesus IS God?  I’ll tell you.  Because He speaks God’s Word and does God’s works.

Let’s talk about how Jesus speaks the words of God.  Jesus said so Himself.  Verse 10 in our text, “The words I say to you I do not speak on my own authority, but the Father who dwells in me does his works.”  Later in the chapter, Jesus says in verse 24, “And the words that you hear are not mine, but the Father’s who sent me.”  While Jesus said some amazing things, He never said He was the source of things.  He repeatedly said that He was sent, and that He was saying what His heavenly Father, and ours, told Him to say.  Unlike many false prophets, Jesus was humble, He was content to be the Servant sent from heaven, to relay God’s message and BE God’s message.  The modern false prophets, like Sun Nyung Moon and David Koresh were anything but humble.

I did a little research this week and found five guys around the world who claim to be Jesus. A guy named Miller in Australia says He is Jesus. He says he remembers being crucified, but not how to speak Aramaic.  He thought Australia would lose both its coasts in 2012. There is a guy from Puerto Rico who is now in Miami who says he is Jesus and the Antichrist, and there is no sin, devil, or hell.  There is a guy in Brazil who says he is Jesus reincarnated, although first he said he was Nostradamus.  He also said the idea that Jesus was resurrected was “absurd.”  There is a guy in Siberia who says he is Jesus reincarnated here to finish what Jesus started. Although he also said Jesus is not God.  And then there is a guy in prison in New Mexico who believes he is God and man united, and that the day he dies will basically be the end of the world.  They claim to be Jesus in some form, but none of them say they are here to serve.  False prophets make demands.  Jesus came to serve.

Now the skeptic can say that anyone can claim to be speaking for God.  Another way that we know that Jesus is who He says He is, is because of what He does.  Jesus does the very works of God.  In verse ten again we look and see where Jesus tells us, “but the Father who dwells in me does his works.”  For example, Jesus has the power to give life.  Think of what the Bible tells us Jesus did.  He came upon a funeral for a boy who was the last remaining relative for a widow in the town of Nain.  Jesus touched the coffin, and the kid came back to life!  Jairus, a synagogue official, came to Jesus and asked Him to heal His sick daughter.  By the time they got to Jairus’ house the girl had died.  But Jesus just took her by the hand, and told her, “Little girl, get up.”  And she did!  Jesus had a good friend named Lazarus.  Lazarus got sick and died, and was in the tomb four days.  Yet all Jesus had to do was say, “Lazarus, come out!”  And he did!  It seems to me only God has the power over life and death.  I believe I mentioned this on Easter but I will do so again.  You ever been to a funeral where the person you were there for got up and walked out? You know anyone who can make that happen?  I don’t. There are some gene splitting, pig cloning, amoeba making scientists who think they can beat God at this game, but only God has this power.

You have probably read or heard about the ferry disaster that took place off South Korea.  300 dead or missing.  Apparently there are videos that we can see of the folks on the ferry before it sank.  It turns out that many of the dead students and adults were found locked in their cabins.  In one cabin, 43 students had come together as they listened to the intercom for directions.  The people running the ship told them all to put on life vests, after the ship had radioed for assistance.  The PA kept repeating: “We ask you again, do not move from your current location. Once again, please do not move from your current location. Absolutely do not move.”

Plain and simple, those orders were bad advice. And the people who listened to that bad advice perished.

Indeed, it would be impossible to find such a person, impossible, until you looked at Jesus.
Now, because Jesus resisted all bad advice and because He did only His Father’s will, all who believe in Him have forgiveness of sins and a home waiting in heaven.

As you know, Erica and I have two charming, delightful, obedient, children.  It was always my hope that my children would not be too much like me.  When I think back at what a weird kid I was, I did not want to go through what my parents did.  But both of them seem to be a chip off the old block.

But we rejoice in a Savior who was just like His Father, more than just a man, but God and man.  Because Jesus is who He says He is, and did what He did, because He IS the Way and the Truth and the Life, He will also make good on His promise to do what He said, “I am going (to my Father’s house) to prepare a place for you….I will come again and will take you to myself that where I am you may be also.”