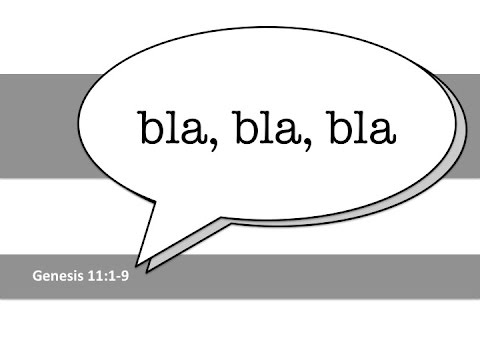 Today, we are going to talk about words. Words are a big deal. If there has ever been a time that you, or someone you know, could not talk (laryngitis, stroke etc.), you know what a big deal words can be. I can tell you here this morning that the last time I could not talk was in March of 1988. Words are important. From our first words and the huge deal new parents make over them to all the ways we use language as adults, words and language are an important part of our everyday lives.

In the Old Testament reading for today, we hear, with words, about a time when words got people into trouble with God. Big trouble. Today I look at you all and say, “Let’s talk.”
Ever wondered where language came from? Before there were any people, before there was any universe, God…spoke. It began when God spoke four words, “Let there be light” (Gen 1:3).
Obviously, when God created Adam, He had to give Adam the gift of language so they could communicate as well. When Eve is on the scene, she needs to be able to speak to Adam. Basic, right?

Of course, the bad news started when the devil used words to tempt Eve. And by Genesis 11, people begin to use a great gift of God, words, in a tragic way. We see the problem as the tension builds and the hearts of all of mankind (at the time) are revealed by their words (vv 3–4). In our text we read,

3 And they said to one another, “Come, let us make bricks, and burn them thoroughly.” And they had brick for stone, and bitumen for mortar.4 Then they said, “Come, let us build ourselves a city and a tower with its top in the heavens, and let us make a name for ourselves, lest we be dispersed over the face of the whole earth.”

Now let’s make sure we know what the sin is here. There is nothing wrong with wanting to make bricks and build a city or a tower. The Devon building over there is not in any violation of God’s Word. In the text, however, it turns out their motive is a sin. They wanted to build it so that they could make a name for themselves and not be scattered! This is a clear violation of God’s command to fill the earth (1:28; 9:1) and call on His name (4:26)! God told Adam and Eve to, “Be fruitful and multiply and fill the earth…” He told Noah, after the flood, “Be fruitful and multiply and fill the earth.” The citizens of Babel were saying that they wanted to make a monument to their own greatness and stay right where they were. My study Bible says about this verse, “Their intention to create a focal point that would keep them in one place was proof that they intended to break God’s command.” This is all a story about language (v 1).

There is great power in language. Would there have been a peace corps in this country if JFK said, “OK, now folks, I want everyone to be more helpful”? But instead he said, “Ask not what this country can do for you. Ask what you can do for this country.” Would Martin Luther King Jr. have rallied this country by saying, “Can’t we all just get along?” Instead he said, “I have a dream.” On a smaller scale, we all know the power of words with a gentle word from Mom after an embarrassment at school, or a kind word from our spouse after an embarrassment at work.

Words can hurt, too. If you have ever read the writings of George Orwell, for example, you know how true this is. We talked about government misuse of language and doublespeak a couple of weeks ago. I am sure you are all aware of how gossip can damage a person, hurt them, destroy their reputation. When you look at American history, victims of gossip can be seen from those accused at the Salem Witch Trials to the quick terminations of the political careers of Edmund Muskie, Gary Hart, and John Edwards. We have heard and seen stories of kids who commit suicide because of Internet bullying.

God recognizes this power of language and states the potential power of human language (v 6). The great problem is that humans had given up calling on the name of the Lord (4:26) and were breaking what would be the Second Commandment (Ex 20:7; Deut 5:11; Luther’s explanation). Remember, there is no Moses yet, no Ten Commandments yet.

And yet the builders of Babel, who thought they were so clever in their use of language, wanted to make a name for themselves. They could name the stuff around them, they could name the stuff they made, but they were not created to make a name for themselves. We do this today in a variety of ways that show our idolatry, our worship of ourselves. You don’t have to look around long in our culture to see people who want to be famous for no other reason than that they are famous. I ask you to consider the contributions to our society by any one teacher, or nurse, or police officer or fire fighter. Any one. And compare that to the contributions to our society by the entire Kardashian family, for example. God is also reminding us that we are guilty of worshipping ourselves every time our ego gets bigger than it is supposed to be. The Bible calls us to live humbly, selflessly, in humility. Not running around saying, “Look at me! See me! Love me!”

And so God came down (v 5). That’s an astounding statement. The tower was to reach the heavens, but it’s so small God has to leave the heights of heaven and come all the way down to inspect this tiny structure of men.

So God came down. And the punishment that the Word of God inflicts is to confuse the words of man (vv 6–9). If nobody could understand anybody else, they weren’t going to be able to build this great monument to their greatness. Consider the irony: We talk big. Then God’s Word is always bigger, always the final answer.

Thankfully, this wasn’t the last time in the story of language God came down to this earth. He came down many times after that through the words of the prophets like Moses, Elijah, Ezekiel. But ultimately, God came down in the person of Jesus, to live, die, and rise again, before going back up.

Jesus’ word from the cross, “It is finished,” declared that all our sins of self are forgiven. All the times we wanted the attention for ourselves, all the times we tore someone else down so we could be more “up,” all of those sins—those thoughts, acts, desires: forgiven. These very words of God, along with the Word in Baptism and Holy Communion, are God coming down all powerfully to change the world, all powerful even when we are the ones speaking them.

It’s Not Humans’ Words but the Lord’s That Accomplish So Much.

Today we celebrate that God came down on Pentecost and the Holy Spirit spoke. He didn’t come down to teach us all Hebrew so we could understand Him. Instead, God the Holy Spirit came down into every language that was spoken, all the languages created at Babel. Now the Church takes up the call to translate and proclaim the Gospel into all the languages of the world. We have many words to share, many things to say to our neighbors and everyone. And what words are those? The Lord’s words, not ours.