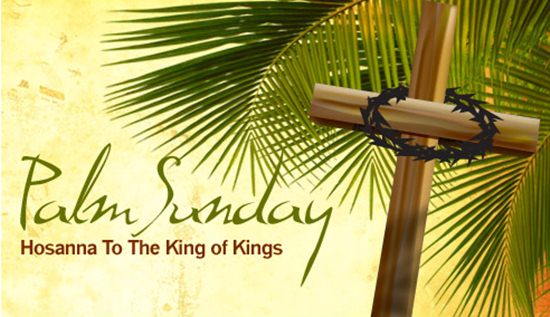 This is one of the more confusing days of the church year. This is traditionally seen as the day we observe Palm Sunday, the day Jesus entered into Jerusalem riding on a donkey, with people throwing Palm branches on the road in front of Him. But our Synodical Commission on Worship suggests to us that this day also is observed as the Sunday of the Passion. The Passion has been getting a lot of PR in our culture these days. Sony released a movie about it last month. Fox is airing a live musical presentation tonight, titled “The Passion Live.” Someone got paid for coming up with that title. Today’s Gospel lesson gives us some of the words of Scripture upon which these shows were based. So, realizing that Jesus entered into Jerusalem with the crowds applauding Him, cheering Him, and calling Him King, we now find Him four days later being taken to Pilate after His arrest in the Garden of Gethsemane, where He was betrayed by Judas. So on this Palm Sunday/Sunday of the Passion, we consider “Jesus’ Passion, and Our Passion.”

Let me first comment on some things in the Gospel about which you may not be aware. First of all, at the beginning of the Gospel for today, Jesus is brought to Pilate for the first time to be charged by the leaders of the Jews. While the Jews had no love for Pilate and the Romans, they wanted Jesus to be sentenced to death, and the Sanhedrin had no power to do this. Only the Romans could. The Romans would not delegate that part of their legal system. Now one of the things that is curious about all this is that Jesus was arrested for Blasphemy, that Jesus claimed to be God. But before the Romans, they never even mentioned this because they knew the Romans would not kill a man because of a religious dispute. Therefore, the charges they brought to Pilate were a lie, a three-way lie: they accused Jesus of rebelling against Roman authority, of telling the people not to pay taxes to Caesar, and assuming the title King (treason). All of these charges were completely false, and they knew it, but this was how great a desire they had to rid themselves of the rabbi from Nazareth.

Pilate wasn’t stupid; spineless, maybe, but not stupid. He saw right through them, and he saw a way that he could pass the buck. He didn’t want to get involved in all this, so when he heard that Jesus was from Galilee, he sent Jesus to Herod. King Herod had been assigned political powers in Galilee. Herod wanted Jesus to put on a show, but Jesus wouldn’t speak to him. When Jesus was returned to the Roman Governor, we see that the Jewish leaders literally blackmailed Pilate to convict Jesus. Pilate obviously did not want to convict him. He tried to avoid passing sentence four times: first, he told the Jews to settle this among themselves, then he passed Jesus off to Herod, then he had Jesus whipped hoping that would be enough, and then he tried to give the mob Jesus instead of Barabbas. But tradition tells us that Pilate had not done a very good job of keeping the peace in Palestine, and the Jewish leaders basically threatened another uprising if their demands were not met. Pilate could not afford another bad mark on his record, so to preserve his political standing with Rome, he gave the mob what they wanted.
So at this point in the drama, Jesus was sentenced to death by crucifixion. Mankind has tried to come up with some creative ways to kill other people off, but this is about the worst. Crucifixion was only used by the Romans on those who were not Roman citizens. It was far too ghastly for them to use on a civilized resident of the Roman Empire. They only used it on those whom they conquered.

Crucifixion is a horrible way to die. It was death by slow torture as it could take many days for one to die while being crucified. Death came by a combination of exposure, starvation, and asphyxiation. This was hardly the kind of fate that the Son of God deserved.

After Jesus was erected on the cross, what was the first thing He did? Did He curse those who did this to Him? Call legions of angels down upon them? No, instead, He prayed a prayer that they be forgiven. Jesus showed His love for those He came to save, even while suffering on the cross itself.
Finally, at about three o’clock, with darkness over the whole land, the veil in the temple was torn in two, a symbol of God being present accessible and available to all. Then Jesus called out in a loud voice, “Father, into your hands I commit my spirit.” And when He had said this, a simple Jewish bedtime prayer, not unlike “Now I lay me down to sleep,” Jesus died.
Until Sunday morning, yes?

This is sobering stuff. We don’t like to hear it. We cringe at the thought of Jesus being on trial before a self-serving politician. We are distressed as we think of King Herod asking Jesus to display His miracles like Jesus is a Vegas lounge act. We wince at the voices of the crowds in Jerusalem screaming for the death of Jesus. We turn away at the thought of Jesus being whipped and beaten. We marvel at Jesus’ strength as He is still able to walk to Golgotha after everything He has been through. And we shudder at the sight of Jesus being nailed to a cross, and the agony He underwent there.

But how does it affect us? I mean He did all this for us, so our sins could be forgiven. When Jesus said, “Father forgive them” it was as if He was saying it to us. Our sins put Him there, after all. That was one of the things that got to me when I went to see Mel Gibson’s movie. That was over ten years ago now. And I haven’t watched it since. A bunch of us from church went to see it as a group. It was hard to watch. It was very well done, as movies go, but the depiction of Jesus’ suffering was, shall we say, undiluted. And as I was watching it, I felt like I was watching the actual events, and I remember wanting to get up and scream at the screen, asking Jesus to stop the Romans and not go to the cross, because I don’t deserve what He did for me. Or you.
We call this account Jesus’ passion. My question for us today is, are we passionate about it? Have we heard this so many times in our lives that it has no effect on us anymore? Do we think to ourselves, deep in our hearts, “C’mon Pastor, get it over with. Let’s skip this and go to Easter.” Or do we recognize this for what it is, the very Son of God giving up His life and taking our punishment on Himself so that we would be forgiven and go to heaven?

It is my hope and prayer for each of us, my brothers and sisters in Christ, that contemplating these events again this morning will have a profound effect on us, that we would be passionate about our faith, and passionate about the One who died, and rose for us. That Jesus should have suffered this way for us should bring us comfort and peace. May we also know passion in our love for Him, and eagerness to tell others about what He did for us. I pray that if it has not been the case before, that it will be now, that truly Jesus’ passion is OUR passion.