“It Could Be Worse”

“It Could Be Worse” 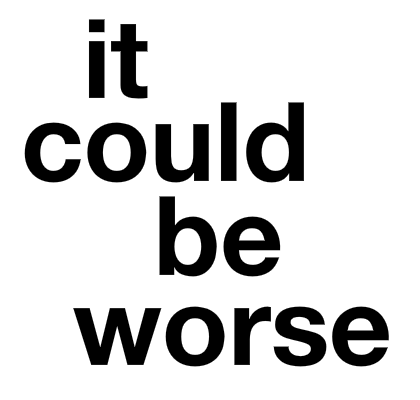 I am old enough to remember when movies that were called comedies were actually funny. It is my opinion, take it for what it’s worth, that so-called comedies today just try to gross people out or make them uncomfortable, that they are not actually funny. I grew up watching Monty Python, Airplane!, and the movies of Mel Brooks. I remember well a scene from Young Frankenstein when Frankenstein and Igor (I am pronouncing that right) were in a grave and lifting out the coffin of the dude who would become the monster. Frederick exclaims, “What a filthy job!” and Igor says, “It could be worse…it could be raining.” And of course, the next thing that happens in the movie is that it starts raining.

There have been many songs and poems and such that talk about misery and how things could be worse. Country and Western songs have been known to be kind of depressing like that. There is the joke going around the internet now that when driverless cars become popular, country songs will be written where your wife, your dog, and your car will leave you. I mention this because this is Independence Day weekend, and I think all of us can agree that while America has been exceptionally blessed—we are a powerful and prosperous nation—at the same time, many of us may look around and see things going downhill. There are many times where many of us think that things are getting worse.

We’ve heard this sort of stuff on the news so often we don’t really notice anymore. Right? Violent crimes continue to make the evening news and affect every community. Every police shooting in our country is now a national story. Education and SAT scores continue to slide. Our country is involved in war overseas, and we worry about terrorism at home. Politicians address all the problems our country faces with words, not plans or anything that will actually help. All they do is say the folks on the other side of the aisle are idiots and worse. Police try to deal with crime but often don’t have all the resources and manpower they need. Society’s wisdom dispensers (insert the name of your favorite celebrity here) offer their solutions without any education or training to back up their opinions.

Divorce rates continue to be higher than they should be. Even the very definition of marriage is being debated. And you can consider yourself well and truly blessed if there is no one in your family that has not succumbed to the temptation of drugs, alcohol, gambling, or one of the legion of other addictions that we find in our society that holds up above all things the gods of pleasure and amusement.

How is this for a happy, cheery sermon?

In the face of our nation’s apparent weakening, you all may have found yourselves looking up to the sky and saying, “Lord, what’s going on? Things cannot get much worse, can they?”

It is not my goal to depress you here. Would you feel better if I said, “It could be worse”? It has been worse. All we have to do is look at the book of Lamentations. When we were doing the summer reading of the Bible thing and trying to read the whole Bible twice, Lamentations was not a book people were eager to read. It’s not a happy book. If you read this rather short book of the Bible, you will see how bad things can get. When you read Lamentations, you read about a time when God brought punishment on His people who ignored His pleas to repent. Pleas that were said over and over again through prophets rejected by the people. There you can read how God, in the days of Jeremiah (586 BC), used the invading Babylonians to destroy the city of Jerusalem, purge His land of people worshipping idols, destroy His temple that was defiled by idol worship, and punish the kings who had trusted in military might and alliances instead of God. God had repeatedly warned the nation that the blessings He promised would turn into curses if they abandoned the faith of their fathers.

Today we may have personal or physical problems that seem more immediate or more pressing than our nation’s woes. You may feel that you have reached the end of your rope. Hang on. It could be worse. Look at the woman in our Gospel. We don’t know her name, but we do know that she was sick for 12 years. Whatever it was that caused her to bleed, her illness made her ritually unclean. This meant by the rules of Jesus’ culture, she was not able to prepare a meal in her home; she had to sleep separately from her husband and remain in isolation from her family and religious community. Doctors added insult to her injury as they tried unsuccessfully to cure her, and all they were able to do was empty her wallet.

It could be worse—even in the Church. In the Epistle, Paul tells how the new congregations of Macedonia suffered through severe trials and extreme poverty. Can we say that we have suffered like they did? I don’t think so. I admit that at times our Synod and our congregation have had problems: lack of resources, difficulty with financing the mission, and even at times a lack of agreement. But our problems pale in comparison to those of the first Christians, who put their very lives at risk by confessing faith in Jesus Christ. Their money and property were confiscated. They and their families faced persecution, even death for their faith. Now, we may not have as much money as we want, we may think we have to pay too much in taxes, but under our legal system the government cannot take our money or our stuff just because we are Christians. We are not staring at starvation or facing the executioner.

Scripture says clearly: it could be worse—much worse. We believe God’s Word, but there is little comfort in simply knowing that things could be worse for our country, for the Church, or for ourselves. My telling you all this may only make you grumpy or depressed. When presented with this kind of information, how are we supposed to do what God tells us to do when it says in Scripture to “Rejoice always” (1 Thess 5:16)?

Well, we know with Jesus Christ the future is not all gloom, despair, and sorrow. Far from it! The Power of the Gospel, the Good News that Jesus died and rose again for us, is far greater than anyone’s depression or misery. When the writer of Lamentations surveyed Jerusalem and the destruction all around, he could still say, with trust in God, “The steadfast love of the Lord never ceases; his mercies never come to an end” (3:22). When all seemed hopeless, Jeremiah still confessed, “The Lord is good to those who wait for him. . . . it is good that one should wait quietly for the salvation of the Lord.” (Lam 3:25-26). Because of His Love and Compassion, the Lord leads us to Joy even when we are facing our trials and tribulations.

We need to look beyond all the gloom and doom! Look up to heaven instead! Jeremiah knew that God is in control, and because the Lord is master over time and history, there is Hope. This is God’s restoring, life-renewing Good News to which we Christians cling when we see our country torn apart by sin and when we are facing life’s worst obstacles. Today we must stand up and say with confidence: “God is in Charge, Jesus is still on His throne. There is a better tomorrow for those who believe.”

Even though Judah was literally going down the toilet, Jeremiah’s trust was in God. Even though the churches of Macedonia knew poverty and persecution, they grew and sent offerings at Paul’s request that were much larger than richer and more established churches. Even though the woman in the Gospel was broke and sick, she knew Jesus could help her. And He did!

Jesus is the one who shatters the power of sin, silences the accusations of Satan, and defies death. Jesus speaks the truth when He says, “In the world you will have tribulation. But take heart; I have overcome the world” (Jn 16:33). To you who are frightened, concerned, and saddened by the troubles in the United States these days, Jesus says, “In me you may have peace” (Jn 16:33). There will be trouble, but He has overcome the world. No longer paralyzed by fear, you can have a new confidence by the Spirit’s power. God poured out His love on you in Baptism, when He made you an unbreakable promise. He has claimed you as His own child. He reminds you of that whenever you hear the Word of Jesus Christ. He communicates that redeeming love to you again every time you eat the body of Christ and drink His blood, shed for the forgiveness of your sins, in the Sacrament of Holy Communion. I have told you that it could be worse. In Jesus, with Him, it is always better!

Time to summarize: The message of Scripture is plain on this weekend when we remember our nation’s birth. How much longer our nation will continue to be free or to exist at all, we do not know. But aside from our fate as Americans, think of our future as Christians—as citizens of God’s kingdom. Our country may fall. God’s Kingdom will reign forever!
In the year AD 107, Ignatius, who had been a disciple of John the apostle, was a bishop of Antioch. A warrant was issued for his arrest. His crime? He was a Christian. When the Roman soldiers arrived to take him into custody, Ignatius joyfully went with them. When he was informed that he would be fed to the lions, Ignatius declared his joy in his martyrdom. Granted, we have it easy compared to Ignatius. Most of us probably will not be arrested for our faith any time soon. Most of us will finish the week without being fed to lions. But, like Ignatius, we do have a victorious Savior.

With light from Jesus, gloom, despair, and agony are banished from our lives. With power from the conquering Jesus Christ, we find peace and healing, whether we live in ancient Greece or modern America. With the Lord of life in the lead, our church is united with the rest of the one holy, catholic, and apostolic Church, including those congregations of Macedonia, who in extreme poverty were filled with generosity and overflowing joy. God strengthens us in disaster. He heals us of our sicknesses. He brings us forgiveness. With Jesus, it is never worse, it is better. As God said in Genesis, with Jesus…“IT IS GOOD!”

Adapted from a sermon in Concordia Pulpit Resources, volume 7, issue 3.