“I Believe; Help My Unbelief!”

“I Believe; Help My Unbelief!” 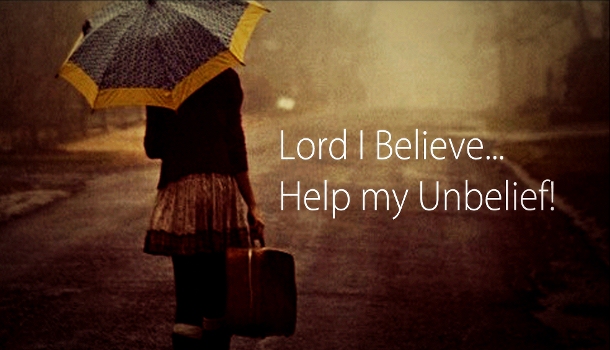 We pretty much take it for granted that we can stand up. We certainly don’t remember the first time we did it, you know, on pudgy baby legs. We figure when we need to stand up, we stand up.
Until we can’t.

If your back has ever gone out on you, you know what this is like. A couple of years ago I had an infection, and the pain was so bad I couldn’t stand up or walk right. We take it for granted that we can stand upright. Until we can’t.

We pray in one of our hymnal liturgy prayers that “we live in the midst of so many dangers that in our frailty we cannot stand upright.” We know how true this petition is for we live in a world where we are hit by temptation, knocked around by forces that are beyond our control, and finally taken by death itself.

In our text, we have examples of those who could not stand upright, spiritually speaking. There are the disciples who just three chapters earlier in Mark’s account (ch 6) were sent out by Jesus and were casting out demons and healing the sick. But here, they were unable to cast out this unclean spirit who so violently infected this boy, throwing him down and causing him to foam at the mouth and grind his teeth. When the Lord Jesus, just down from the Mount of Transfiguration, came to them, He found His men arguing with the scribes who were there, and a big crowd looking on. They were unable to give an answer for their powerlessness. Now you might be wondering what is going on here. We know that by the power of the Holy Spirit they had cast out demons from people the first time Jesus sent them out. Why couldn’t they now? I think the most likely scenario was they had gotten overconfident. I believe they had not asked God to cast out the demon. Jesus said they did not pray. They tried to do it themselves. They could not stand upright. They had failed.

In our list of those who could stand upright is the nameless child in this account. Mark is graphic with his description of a kid whose tongue and body are seized by a spirit that convulses him, causing him to roll around on the ground, even plunging him into fire and tossing him into water. With a body as rigid as a corpse, he was unable to stand. He could not by the power of his own will get himself out of this life-threatening predicament. This demon just caused his body to flail and flop around, and the poor kid was not able to stand up to it.

Then there is the poor father, who watched his son since childhood endure this demonic agony. And think about this: Who suffered more—the son or his father? Helpless to alleviate the pain of his son, the father could not stand upright under the weight of this misery. He brought his son to Jesus’ disciples, but they crashed and burned. The disciples were a disappointment.
We know what this is like, right? There are many ways that we are unable to stand upright…the addiction we can’t kick…the pain we feel that does not go away…the sin we keep doing over and over and over.

As we go back to the text, Jesus said, “Bring him to me” (v 19). They brought the boy to Jesus. The unclean spirit reacted to the Lord’s presence, causing the boy to tumble around on the ground and foam at the mouth. The father then offered to Jesus a rather iffy prayer, an iffy petition: “But if you can do anything, have compassion on us and help us” (v 22). Jesus responds, “If you can! All things are possible for one who believes” (v 23). These words of Jesus cause the dad to offer up another prayer, something that I think is a better prayer. It is a prayer that is, in fact, a one-sentence summary of the Lord’s Prayer: “I believe; help my unbelief!” (v 24). That is the prayer not only of this desperate father but also of every Christian. It is your prayer, my prayer, for we cannot stand upright, we can’t, not on our own.

When we say the words of the Third Article’s explanation in the catechism, “I believe that I cannot by my own reason or strength believe in Jesus Christ, my Lord, or come to Him,” we are not merely making a statement about our conversion, our coming to faith. We are, in fact, confessing that it is only by the Spirit at work in the Gospel that we believe now, in the present tense. “I believe now! Help my continuing struggle against unbelief!” “I Believe; Help My Unbelief!” Is the Prayer For Those Who Cannot Stand Upright.

This week The Lutheran Hour’s website had the story of a lawyer who moved into a new community, hung out his shingle, and buried himself in his new practice. In the morning and evening, townspeople would watch him walk alone to his office. His head would hang, his shoulders would stoop, and always there was an expression of sadness and sorrow on his face.

One day the lawyer did manage to confess to a Christian artist that when he was just starting out, he had committed a serious error. And that sin from years previous was still stalking him, even then.

The artist listened. He gave no guidance or suggestions, not then.

Weeks later, he did invite the lonely lawyer to see a new painting at his studio. The attorney arrived for the viewing and was led to a portrait. There he saw a picture of himself. It was himself, but it was different. In the picture he was standing with his shoulders back, his head lifted up, and a look of hope was shown in his smiling face.

Behind him, in the background of that picture, was a hill and on that hill was an empty cross. At the foot of the cross had been placed — along with many others — a great, heavy package. Evidently, at least according to the artist’s intentions, he left his burden at the cross and found something there that had changed him, that made him a new creation, that allowed him to stand upright!

“I Believe; Help My Unbelief!” Is the Prayer For Those Who Cannot Stand Upright. We can pray this prayer because the One who heard it from the lips of a desperate father went to Calvary as our Savior, who died on the cross for us, and in His resurrection from the dead, He stands upright as our great and everlasting Savior, Redeemer, and Friend. In His sacrificial sinlessness, He stands upright. And because He Loves us, He is able and willing to reach down and pull His children up. He reached down and pulled upright the boy in our text. He told the little girl who had passed away “Talitha Koume” (Little girl, get up!) and He reached down and she stood upright. On the rough waters of the Sea of Galilee, when Peter walked out and then sank, because well, he’s Peter, Jesus reached down and pulled him upright and got him back in the boat. In the same way, on the last day, Jesus will reach down to us, either with us on our knees in worship or in the grave, He will give us His hand, and He will pull us upright. And standing there with Him, He will lead us to Forgiveness, Peace, and the Place He has prepared for us in heaven. There we will find no more doubt, no more pain, no more fear. There we will stand upright with Jesus, in Joy and Love.