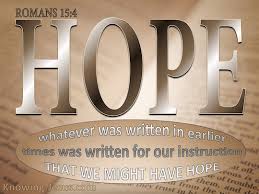 Last week, you may recall that our sermon asked, “What are you waiting for?” Today we ask, “What do you HOPE for?” There’s one kind of hope that’s really a wish. As Christmas approaches, many are hoping to receive certain presents. Maybe you are hoping for a new phone, tablet, computer, TV, car, house….You may or may not get them. Hope, the way we normally think of it, is usually just optimism. Charlie Brown always hopes this will be the time that Lucy doesn’t pull the football away, and he’ll get to kick it. (And I don’t think he ever did.)
But what does it mean to hope as a Christian? True hope,

Christian Hope Is Grounded in what God Does and what God Promises. St. Paul says to us in our text today from Romans 15, “Christ became a servant . . . to confirm the promises [God gave]” (v 8). That’s the basis for real hope, our Christian hope, the hope we have in Jesus Christ.

Christians can, though, succumb to a false kind of hope, a kind of faith that is just optimism, a non-theological belief that “everything is going to be okay.” This is a false faith that disappears quickly when the bad things come. As we wait in real hope for our Lord’s return, we can become weary and discouraged. Life is filled with all sorts of unexpected stuff, things that we never imagined when we were starting out. Once, we were filled with hope, but the way things have turned out—Is this what we hoped for? No couple getting married hopes for divorce. Parents of a new baby don’t hope for discipline problems. As we go about our daily business, we never imagine that around the next bend is a car that will smash into us, changing not just the afternoon but perhaps a lot longer than that. Is this what we hoped for? How can one be a Christian in the middle of such things? Is being a Christian just being optimistic, hoping for good things to come later on, just maintaining a cheerful disposition?

Look out if this is your idea of hope! That’s not hope. And don’t put your hope on yourself, that somehow your good deeds, your sincerity will someday pay off. Hope in yourself is destined to fail. To hope in ourselves is to make ourselves into our god, which is the worst kind of idolatry. Hope without an object—something (or Someone) to hope in—that sort of hope will fail. With a false hope, we will end up hopeless. We might be sincere, but we will be sincerely wrong.

Christian hope is not a wish. To hope as a Christian is not simply to want everything to turn out well. Christian hope is complete confidence and conviction. How can you have such a hope? Like I just said, you cannot find hope in yourself, you must look outside yourself, to God and what He does and what He promises. That is why, when Paul begins to talk about hope in today’s Epistle, he points us to the Holy Scriptures: “Whatever was written in former days was written for our instruction, that through endurance and through the encouragement of the Scriptures we might have hope” (v 4).

The Holy Spirit did not inspire the Scriptures to be written as a mere list of dos-and-don’ts, a sort of holy etiquette book. The Lord’s Law is there to show us our sin, to be sure, but the record of God’s deeds and promises done for and given to His people is there for us to learn that God is the One in whom we should trust, a God who desires to bring us out of our troubles into grace and blessing.

“Whatever was written in former days was written for our instruction, that through endurance and through the encouragement of the Scriptures we might have hope.” What things in the Scriptures? Consider the many saints who in the middle of suffering had endurance, which we can also think of as patience. Think of Job, so patient in his suffering, even though he lost his children, possessions, and health, plus he had a faithless wife. Recall how everything and more was restored to him, in God’s time. Think of Joseph, betrayed by his brothers, so patient in prison, accused unjustly by his boss’ wife. Recall how he was raised up as a prince over a foreign people, in God’s time, for the ultimate purpose of saving not only Joseph’s family, but the line out of which the Messiah would come. Think of David, patient as his father-in-law Saul, the king, and later his own son Absalom, the prince, both tried to kill him. Recall how the Lord delivered David, in God’s time, again for the ultimate purpose of providing a Savior for all the nations of the earth.

All of these men were patient in adversity; they showed endurance even when it seemed God was against them. Why? Because they were special, different from us? No. Job, Joseph, and David trusted in the promise that God would rescue them in due time, in His own way. They hoped in Him.

Every problem you have in life, be it with money, family, health, or whatever—it all comes from a more fundamental problem: our total sinfulness and depravity that poisons every human relationship, that sickens and finally destroys every human body, that warps and twists every human mind away from our God and Father. The Lord long ago gave His promise, the promise that one would be born to overthrow the devil who spins lies against God’s Word, who would crush the serpent’s head and destroy death. The Lord gave His promise, and He fulfilled His promise in the incarnation/birth, death, and resurrection of His Son, Jesus.

“Christ became a servant . . . to confirm the promises [God gave].” Risen from the dead, He gives us reason to hope, hope for our own resurrection, freed from suffering and sin, for life with God.

To those whom the Holy Spirit has given true faith, God gives reason to hope—not wishful thinking, but real substantive hope: as He fulfilled His promise in the past by mighty deeds, so He will fulfill His promise to you, to forgive you all your sins, raise you up from dust and decay, and bring you to everlasting joy.

No one is fit to receive God’s gifts, His promises. Nothing we do can make us deserve it. That’s why infant Baptism shows us clearly how the Lord works. God takes someone who can’t walk, can’t talk, can’t feed or clothe himself, and says, “I give you my promise; you are mine.” That’s what God says to you, too. All the words and promises of the Scriptures apply to you. The Lord who was David’s Shepherd is now your Shepherd. The Lord who gave Job grace to persevere in his problems promises you the same grace to persevere in all your troubles. And the Lord who brought Joseph out of the pit and then out of prison promises to bring you out of the pit of your grave and out of the prison of death into life with Him.

Now “may the God of hope fill you with all joy and peace in believing, so that by the power of the Holy Spirit you may abound in hope” (Rom 15:13).