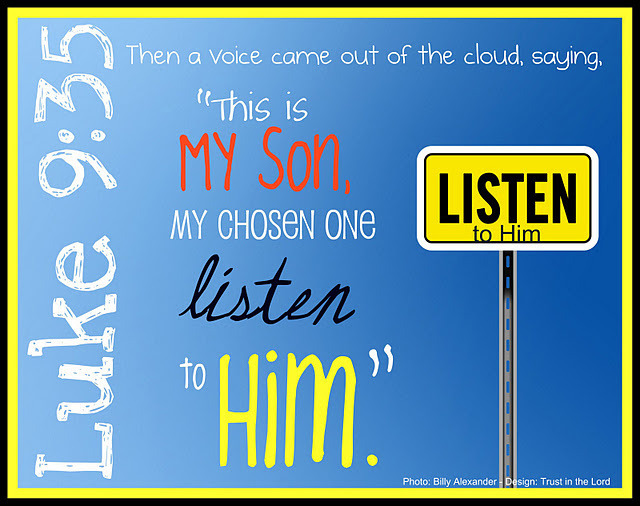 I do not know when was the last time you played hide and seek.  I am guessing for most of us here it has been a while.  The game tends to be less popular the older we get.  Although I must say with all the events being added to the Olympics these days, I am surprised hide and seek is not among them.

There have been times that Matthew has disappeared on me and when I start looking for him in earnest, he would pop up and say, “Here I am!”  Kind of like Sheldon in the ball pit on that episode of Big Bang Theory.

In the Gospel for today, we see a time where God wanted everyone to know that Jesus is His Son, and Jesus is God.  While Jesus did not say “Bazinga,” He is making sure Peter, James, and John know who He absolutely is on that mountain, just days before Jesus died.  Here, in Jesus Christ, we see the true God.  Here, on this Mountain of the Transfiguration, Jesus is telling the World, “Here I Am.”

God has a history of revealing Himself on mountains.  Moses came face-to-face with God and heard Him speak from a burning bush on Mount Sinai.  The fire indicated the presence of God. Then His presence was confirmed in the Word of God.  When you start to hear the voice of God coming out of a burning bush that is not being consumed by the flames, that might be a hint this is something special.

Later, when Moses and Israel fled from Egypt, the glory of the Lord was with them on that same mountain.  A thick cloud appeared over it for six days.  Similar to the first time Moses met God, “The glory of the Lord was like a devouring fire” (Ex 24:16–17).  All the Israelites knew Moses was on that mountain with God.  With all the smoke and rumblings the LORD made it clear He was there.

Centuries later, again on a high mountain, God in the flesh, Jesus, reveals to Peter, James, and John where God is.  The Gospel text today says He was transfigured before the apostles’ eyes.  Now I realize we do not often use the word “transfiguration, ” but I use this Sunday to tell you every year that on this day, Jesus became how He is now in heaven.  Jesus was changed.  His face shone like the sun. You know what the sun is, right? It’s a ball of fire. Jesus’ face shone as if it was on fire, much like the burning bush Moses saw.  Jesus’ clothes were likewise bright white.

During all this spectacle, Peter suggested, “If you wish, I will make three tents here, one for you and one for Moses and one for Elijah” (Mt 17:4).  I have always thought that Peter was so overwhelmed with what was going on, that he wanted what he was seeing and experiencing to last longer.  You see a good movie or show and when it ends, you wish it could keep going.  The same with a good book, a good date, a good vacation.

But here is something else to think about.  A tent, the tabernacle, was what God had once instructed the Israelites to build.  The  tabernacle was a place where the Lord could dwell with His people and bless them.  Maybe Peter was saying here that building these tents was the right thing to do, a place for the three of them to be.

A cloud then covered the mountain, just like with Moses when he got the Ten Commandments.  The voice of God the Father came to them from the cloud. “This is my beloved Son, with whom I am well pleased; listen to him” (Mt 17:5).  Peter, James and John saw all  this.  They heard all this.  And we have to be clear at this point, they hear the Father setting them straight: “Listen to him”—just Jesus, not all three.  Not Moses.  Not Elijah.  Just Jesus.

As I mentioned before, what this was really was a glimpse of heaven.  And this happened just days before Holy Week, days before Jesus’ demoralizing arrest, trial and crucifixion.  Peter and his fellow apostles were eyewitnesses of an awesome sight.  Essentially, He said, “Here I am” (I’m God! I’m Yahweh)!  Jesus was saying, “You want to see God?  Here I am.”

Another place that Jesus reveals where the true God is by His cross.  As Peter and the apostles were descending the mountain with Jesus, He told them where they were headed (Mt 17:9).  Jesus had come into the world for this.  The true God became flesh specifically in order to suffer and die.  He would have to be dealt with like a sinner so we could be counted as holy ones, as forgiven.  After Jesus was raised from the dead, the apostles preached precisely this—preached so that you could hear: Hear that the cross of wood that Jesus bled on was made that way on account of our sins.  Hear that there is now a mountain yet more holy, Calvary, because the holy one of God was hung there on that cross.

Peter preaches to you not to follow cunningly devised myths, but to repent of your sins and receive this holy, innocent, bitter suffering and death of Jesus for your forgiveness.  And God has brought you here to receive His Gifts here.  While God is everywhere, the primary things God uses to bring you the gifts of His love are not on the golf course for you, not on the lake for you, not even at home for you. He has located Himself in these places for you. He is here for you for the forgiveness of your sins precisely where He has promised to be, where He promises to deliver His cross to you and you to His cross.

He has by His Son now spoken to you that He will continue to be on the holy mountain of the altar for you, for the forgiveness of your sins. In the Sacrament of the Lord’s Supper, He comes with His cross to you and for you. He has promised to be there for you in the waters of Holy Baptism. There you are buried with Christ into His death to receive the robe of His righteousness, His forgiveness.  In Christ’s word of forgiveness preached to you, in Holy Absolution pronounced to you, you have that same forgiveness of the cross.  Jesus reveals the true God to you—that same forgiving presence of the Lord—wherever His Word and Sacraments bring you to His cross.

The apostle Peter is pointing you today to where we can know the true God. Moses and the Prophets of old had always testified that the place to look is the one and only Jesus Christ. That was confirmed to Peter in the Transfiguration of our Lord, where he saw and heard the Son of God, God in the flesh of man basically say: “Here I am.” Now, today, you see and hear the true God in this same Jesus in the Holy Word of Scripture and in the Sacraments. The true God is here for you, preached and here in the bread and wine, as He came to save the world by His death on the cross. “Here He is,” the One for you, for the forgiveness of your sins. In the name of the Father and of the † Son and of the Holy Spirit.