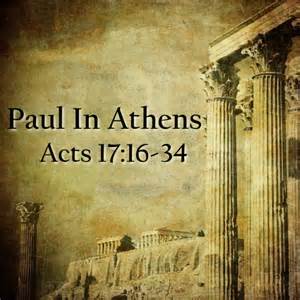 There are certain things that we want to know but we’ll probably never know. And we don’t like the unknown, do we? Did Lee Harvey Oswald really act alone? What really happens at Area 51? What are the 11 secret herbs and spices in Kentucky Fried Chicken? Did Franco Harris REALLY catch the Immaculate Reception? Who did let the dogs out? And what is really inside of a Twinkie?
Mysteries. Things that are truly unknown. I bring this all up here this morning because in our first reading today we see Athens had an altar “To an Unknown God.” For us who gather here on a regular basis–we never question the fact that we are here to worship and we do not question who we are worshiping: the Triune God, Father, Son and Holy Spirit. He is not unknown to us. There is no question that this is the God that is at the center of our lives every day. Today we think and talk about the God who wants us to know Him, for He is here to “Help.”

Let’s take a look at Paul first, for a minute. Our text finds Paul in the middle of his second missionary journey. When Paul came to the town of Athens, Greece, it was a town where the people considered themselves the keepers of philosophy. For entertainment, the people would gather and listen to other people discuss and argue new ideas, religions, and the like. We have Facebook and the internet for this now, I guess. 2000 years ago, Paul, entering this culture of ideas, found himself standing in the Areopagues near the Acropolis and across from the Parthenon. (I mention this because parts of those structures are still there.) The Parthenon was built in tribute to the goddess Athena, so standing there, surrounded by all this pagan architecture, Paul was probably a little mad and it reinforced to him the need to teach these people about Jesus. Paul saw that in the town there were idols and altars to every god in civilization. And to top it all off, there was an altar with the inscription, “To the Unknown God.” The folks in Athens who worshiped and noted many, many different gods and deities, wanted to make sure that they had not left anybody out. They wanted to keep their bases covered, right? So in case they missed one, they put up this altar.

This was the opening that Paul needed to address the folks who had gathered there. And Paul told them about the real God. Except this God is not unknown. He has a name. When Moses asked Him His name, He replied that His name is “Yahweh.” And for us here today, we call Him “Our Father who art in heaven.” He is the God who created us, the universe around us and everything that is Good in our lives.

Paul also told the folks in Athens about God’s Son: Jesus. We know Jesus. He is our Savior. Our heavenly Father sent Jesus to do a mission, to rescue us from our sins by dying on a cross and rising again from the dead. When Paul told the folks in Athens about this, many of them stopped listening. While they liked to think of themselves as open minded and tolerant people, many of them thought it was ludicrous to consider that a man could rise from the dead. They thought it was ridiculous, and that Paul was an idiot.

But remember my friends, Paul met Jesus on the road to Damascus. He had encountered someone who had risen from the dead. The apostles and many disciples saw Jesus raise the daughter of Jairus, the son of the widow in Nain, and Lazarus. Hundreds of people had seen Jesus risen. But Athens was a long way away from where those things took place.

Here’s the thing about this “Unknown God.” He doesn’t want to be Unknown. He wants to be known. He is known. He has done everything He can to be known and has given us everything we need to know Him. Don’t believe me?

God Incarnate came to us in Jesus Christ, the Son of God. God walked this Earth for 33 years, starting in Bethlehem. He grew up as a carpenter, started preaching and teaching. Jesus told us everything the Triune God wanted us to know…and it’s a lot! He then ended up in Jerusalem where He was crucified, died and rose again outside of town. Then He ascended back to heaven at Bethany. And we’re still not done!

God still wants us to know Him. So He gave us His Word, the Bible, which has survived 2000 years of history, of wars, of plagues and Dark Ages. We still have it! All because of Him. And we have the Church, we have the Sacraments, we have all the things that God has given us so that we can, will and should know Him. God did not set all this up, start it up like a music box, or like hitting play on a DVD, and then walk away. He is involved. He is with us right now! He wants us to know that He is the Way, the Truth, and the Life (reference to last week’s sermon). All creation testifies to the God who loves us, saves us, and gives us everything we need to live here, live eternally, and KNOW HIM.

Not everybody does. While God has done a lot of “talking” to us and still does, lots of people aren’t listening. While evidence of Him is everywhere, people aren’t seeing. I have a son, I won’t tell you which one, who has trouble finding things. He comes to me regularly saying he can’t find his, whatever, and I will go in his room and it will be there on the floor, clear as day. To ME. But he can’t see it. This is nothing new. I am reminded in the Bible how Jesus was out and about one day, and He ended up feeding a crowd of 5,000 men, not including women and children, and He fed all those people with 5 loaves and two fish. Not bad, right? Feeding a crowd, big enough to fill up the arena down there, with a MacDonald’s Happy Meal? But then the next day the crowd was like, “Show us a sign that you are who you say you are?” He just fed thousands with a little boys lunch! Just the day before! And then they say, “Show me a sign.” Just like all those out there who say they would believe in Jesus if there was only a sign He was out there…and the signs are all around us. You just have to see them.