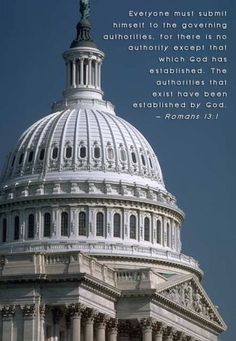 It has been said that when you have friends and you want to keep them as friends, it is best not to talk about religion or politics. Today as I look at you all, I see my brothers and sisters in Christ, I see friends, but we are going to talk about BOTH religion and politics. Now we talked about this a little last week when we talked about how everyone, whenever they lived, looks back at earlier days as happier times, better times, slower paced times. Now I was born in the 60’s, raised in the 70’s, and became an adult in the 80’s. I saw a president resign. I saw a presidential candidate promise he would not raise taxes. He did. I saw a president get impeached. It is so easy to look at what happens in OKC and Washington D.C. and get cynical when we add up all the lies and the broken promises. Amen? It seems that no matter where I go, whether it is talking with you folks or other pastors, there seems to be a basic mistrust of government. It is as if many of us consider government ungodly. Distrust of those in government is so wide spread that we might think that God Himself has nothing to do with those people. However, that is not the picture that St. Paul presents. St. Paul tells us that God is not disinterested in government. God is very interested. In fact, He establishes all authority. Yes, that is all authority. Even those governments that bring hurt and pain to others. Even those governments who persecute God’s people. All authority comes from God.

Now we need to be clear from the start here. Paul is telling us all governments are acting with God’s authority. That does not mean they are always doing what God wants, right? God expects everyone acting in one of these positions with His authority to rule with honesty, integrity, wisdom. Now I hear you laughing in here when you compare God’s desires to what we actually see and hear each day. But that is God’s expectation. Always has been. (By the way, He expects us to be loving, caring, honest, selfless. How are we doing with that?) God expects a lot from us, and from those who govern.

Let me give you an example. The children of Israel had grown comfortable. God had delivered them from Pharaoh, from seven nations in Canaan. Yahweh was their God and surely He would never leave them. Not even if they got lazy about obeying Him. Not even if they started worshipping other gods whose “liturgy” was a lot more fun if you know what I mean. Imagine their horror and surprise when Isaiah announced that God was going to use the Assyrians to punish them, His own people. Can’t you imagine the shock on their faces as they see God whistling to get the attention of the Assyrians, saying, “Over here!” God whistled up the Assyrians, and later the Babylonians because His children had turned their backs on Him and were partying, immersed in their evil. At the same time, He held those nations accountable and punished Assyria and Babylon. You may have noticed those governments are not with us anymore, either.

There are other examples of this in the Bible. Jesus surprised Pilate as He stood silently before him. When Jesus finally spoke, it was to say, “You would have no power over me if it were not given to you from above.” (John 19:10-11) Obviously shaken, perhaps realizing that what Jesus said was true, Pilate tried to set Jesus free. The Biblical truth is clear. No matter who is in authority, whether it is the King of Judah, the Emperor of Assyria, or Caesar, a dictatorship, a monarchy or a democracy, all authority comes from God.

Paul makes it clear God does this with a loving purpose. He gives authority to bring punishment on wrongdoers and to commend those who do right. Governments exist so that there is public order. That order we need does not come about naturally. God has a very sober view of humanity. Some think people can be trusted to do the right thing, and therefore government is not necessary. God sees just the opposite. God sees that people are inherently sinful and will always put their own interests before others. Therefore, God has given governments authority to keep selfishness from tearing societies apart.

Think about it. We invented radar detectors so we could speed, yes? Blu-rays and DVD’s are encoded so we can’t just copy them. (People do it anyway.) There are the folks who buy on the down low cards to put in their satellites receivers so they can get all the channels for nothing. Congress debated a patient’s bill of rights because there was evidence HMO’s placed profits ahead of patients. President Bush enacted tougher requirements on CEO’s in this country because so many lied in their reports to stockholders. Police patrol our roads because too many drivers put others in danger.

Can governments botch their God given responsibilities? Of course. Judah did. Rome did. Have the folks you voted for lately, and who won, done what they said they were going to do? Everyone in office behaving well, showing love, compassion, patience, wisdom? God gives the authority and expects them to follow His rules. When they do not, they are replaced. That is one thing we learn from history.

The fact they do botch it though is not the only reason why we resist their authority. We also resist because we don’t like being called to account for ourselves. Now we note here that if the government tells us to do something that is in direct contradiction of God’s Word, we are to obey God rather than men. We also know that God gives governments authority to try and control our sinful natures, but that does not change us. He knows we will act selfishly the minute no one is looking. (Remember that list I just gave you?)

We should gladly obey the laws and fulfill our civic duties. When we obey and follow the Ten Commandments, we are just naturally good citizens. God’s Law provides principles for civic life. He commands His people not to murder or steal, or exploit people. As Christians, we are to respect Government, pay taxes, and meet our other civic obligations as we work for human welfare and peace. I read in the commentary you all bought for me that commentarian J. C. O’Neill believes, “these…verses have caused more unhappiness and misery in the Christian East and West than any other…verses in the New Testament.” As Christ has canceled the debt of our sin, in love we use our freedom to glorify God and to serve others. Volunteering in the community, joining civic groups, doing acts of kindness and charity are things we can do to show a love that continues, a love for our neighbors and a love for our country.

But it isn’t good enough for God that we behave ourselves. He doesn’t want just changed behavior. He wants changed hearts. So He sent Jesus. I am going to get back to that in a minute.
There is another function that God gives to the government. We are going to be reminded of that this week. Government authority is there to protect its citizens. Tomorrow we will observe an anniversary of a day that reminded us we need protecting. There are still many in our country who are hurting after the events of September 11, 2001. We have seen many acts of terrorism since. You may have heard that there is a dictator in southeast Asia who keeps saying he wants to drop some big old bombs on us. Is he crazy enough to do it? I don’t know. But we need to be reminded here today that when earthly protection is breached, we still have the heavenly protection given us by God. While there may be those who hate us and seek to hurt us physically because we are Christians, or democratic, or just because we’re Americans, our souls are always in the protection of our Almighty God. The minions of Satan can hurt our bodies, but they cannot touch our souls. God loves us and promises us we will always have His protection. Always.

I realize in this age, maybe every age, but we know in this age that the folks we have elected often let us down. But think about it: In what may be the biggest miscarriage of justice in all human history, when the completely innocent Jesus was proclaimed guilty and nailed to a cross, God used that death and Jesus’ resurrection to save us all. Instead of seeing that we got what we deserved, He died for us and took our punishment in our place. Then He rose again that we may now stand guiltless before the Father through the gift of faith. Forgiven in Jesus, we run to God as children run to a loving father. We stand cheerfully before Him, citizens of His kingdom.

Therefore, I ask you to remember that whatever those folks in Washington D.C., or down here at our capitol building say, no matter how disappointed we may get, they are there by God’s authority and it is our job to submit to that authority. They are there so that here, there will be order, peace, and protection. Know also, that by the death and resurrection of Jesus, we are citizens of heaven, and when we stand before Him, we will know the perfect ruler and leader, and our cynicism, like our sins, our tears, and all our imperfections, will be gone forever.