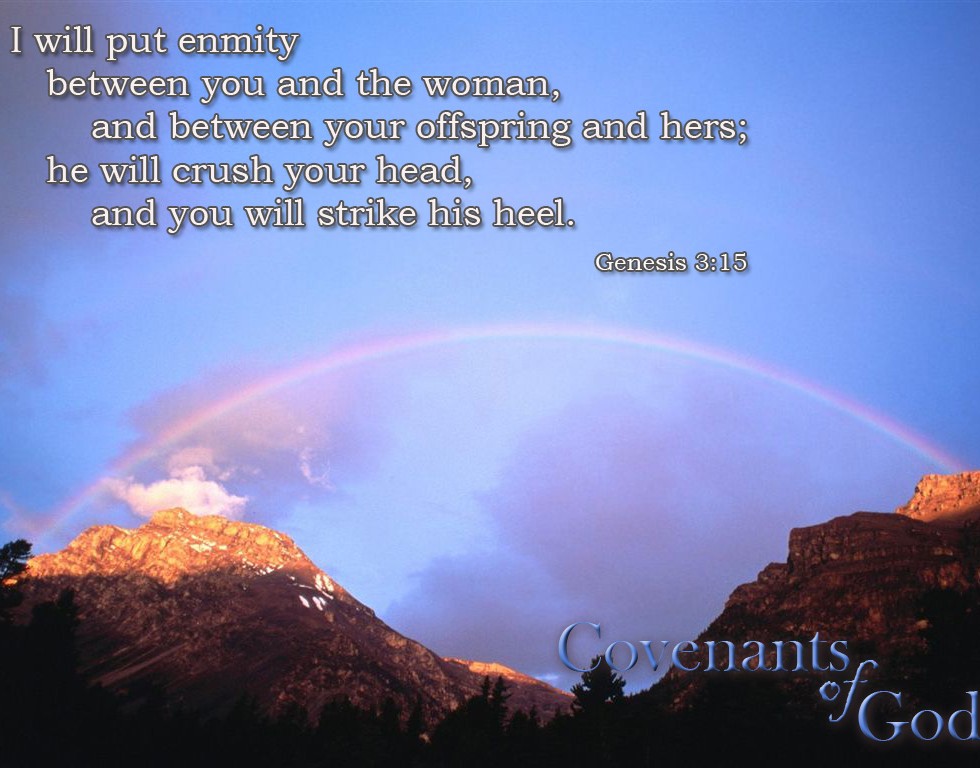 Older children like to take advantage of their younger brothers and sisters when they are young.  I read a story where an older brother with a nickel tricked his younger brother with a dime into trading the two coins, even up.  The older brother told him the nickel, since it was bigger, was worth more.  Oops.  The little brother learned the hard way that once the five-cent value is lost, it cannot be spent or shared. What the younger child does not have, he is not able to give.

When we look back at what happened in Garden of Eden, and all this stuff really happened, we are a church that believes everything in Genesis happened as it says, we see that Satan is what he has always been.  He has already fallen from grace in his rebellion against God and so he no longer has the good and godly gifts that were given to him.  Without the life of God, he is dead. He is under God’s wrath and judgment. The heat and fire of hell were made for him.  And so he takes it upon himself to try and have more company, and try and reduce the number who belong to God in heaven.  But there is a problem.  He can give only what he has (vv 1–5).  He cannot increase the number of good and godly gifts the woman and man already have from God, He cannot improve on them. Adam and Eve have it perfect.  So what is Satan supposed to do?

He lies.  The serpent deceitfully implies that the woman and man can have more but, like the older boy we started with here this morning, he leaves them with less. He implies a promise to add value to their lives, while in reality leaving them to die. In the Garden of Eden, he drags the woman and the man down to join him under the hot wrath and fierce judgment of God.  Satan lies and people die.

His lying and murdering did not end in the garden. He is still trying to convince us he has something good to offer.  He still lies.  Every day we are offered what he is selling.  Our resistance to temptation puts us in the heat of battle. Every day he is in here, telling us that what we shouldn’t do: is no big deal, it is just a small thing, no one will notice, everybody else is doing it so why not us.  Sound familiar?  Ring a bell?

It is one thing to hear what he is selling, but it is another thing entirely when we listen to him and then say, “You’re right!”  We find ourselves under the same wrath and judgment as Adam and Eve and every sinner when we give in to temptation.   We all know the wages of sin is death.  When we do what he wants, when Satan wins the temptation battle, he is able to give what he has. And what he gives is guilt, misery, death, and hell.  We can only give what we have, and that is what Satan has.  That is what Satan gives.

Now let’s turn our focus to Adam and Eve.  They can give only what they have.  At creation, God had given the woman and the man beautiful gifts to share and pass down to their descendants. Because they were created in His image and likeness, they originally were perfect.  “His Image” doesn’t mean they looked like God because they looked like us, not God.  That means they were perfect like God.  They had perfect righteousness, pure holiness, and prized honor. This was theirs to give.

But by giving in to temptation, they lost those gifts (vv 6–13). After eating the forbidden fruit, the woman and man are naked and exposed, revealing sin, shame, and guilt due to the loss of God’s good gifts of holiness, honor, righteousness. What they did cost a lot.  They lost holiness, honor, righteousness.  What they do not have they cannot give.

As a result, all humanity is now without those good things.  Instead when we look around, when we look in the mirror, what we see, what us revealed: is sin, for we do disobey God, we find shame for we try and hide these things from God, and guilt for which we will try and blame God or each other instead of ourselves.  All humanity is under the heat of God’s wrath.  I can’t emphasize enough what was lost here.  They were like this with God, and now there is this separation because of sin.

Here is the kicker: Worse than those things is that everyone since that day…dies.  Nobody was going to die before there was sin.  Now no one can escape death.  As a well known literary character once said, you can try to live forever, or die in the attempt.  But this is one thing we can’t escape.

So we know what Satan has, what he gives.  We know what we have and what we give.  The Good News I have for you today is that despite the fall into sin, God gives only what He has.  God ought to give us white hot wrath for our sins, but His response to Adam and Eve’s sin is surprising; it’s a cool response (vv 8–9).  In the cool of the day, He comes to Adam and Eve with a promise (vv 14–15). For God still has love to give us. There is no quit in God, There is no abandoning His people (v 21), and what God has, He gives.  He has love and grace for His children.  The promise is given in gen 3:15.  The promise begins to be fulfilled as God comes in the cool of the night at Bethlehem, the Spirit’s message conveyed by holy angels to the shepherds in the field.

Still, God does have that hot wrath to give—and He must give it. Sin must be punished! With death!  But He also has a Son to give.  In the cool of the morning, cool enough for a fire in the high priest’s courtyard, God’s Son is tried, convicted, and crucified.  Jesus faced the furnace of hell; God gave Jesus all the wrath He had to give.  And while Satan offered what He couldn’t give, Jesus gives to God what He really does have—everything it took for our rescue.  Jesus gave His holy, innocent, blood in exchange for peace between God and humanity. The sacrifice of Jesus appeases the white hot wrath of God the Father.  Jesus gave His heel, His life into death on the cross, for the head, the crushing of Satan.  Jesus gives us Himself, and the worthless become priceless. The dead are made alive. The resurrection of Jesus assures us that the serpent’s head is crushed.  And now He gives us faith, forgiveness, eternal life.

This is the first Sunday in Lent.  Lent means stuff.  The deceiver, Satan, still wants to give you what He has and to promise what He can’t, to rob you of your faith, forgiveness, salvation. Do not listen to that liar. Keep your eyes and your ears fixed on Jesus, your Creator and Redeemer.

Jesus Christ has fully and completely endured the just wrath and condemnation for sin, guilt, and shame. That’s now spent; it’s gone. There is now no condemnation for those who are in Christ Jesus. All that’s left is forgiveness. And One—Even God—Can Give Only What He Has.