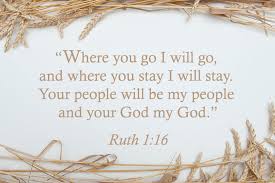 How many of you, I am talking to us adults here, are doing exactly what you wanted to do when you were young, and it is the only thing you have ever done? In other words, how many of you have a life that was a straight line, and how many look like this? (8) I think it is probably true for most of us that zig zags represent our lives more than a straight line. Today we are going to talk about Ruth, and as we do, we will be reminded that no matter what unexpected things happen in our lives, God’s Hand Leads Us.

This book starts with a famine. You know what a famine is? It’s when crops stop growing and people starve. We haven’t seen anything like that here in almost a hundred years. But famines still happen. If you are of a certain age, you will remember We Are the World, Live Aid and the like, which raised money for the famine in Ethiopia. Whenever famines occur, people have to relocate, as they have to go find food where it’s available. That’s what happened in our Old Testament reading today from Ruth. This famine occurred during the time of the judges, the period in the history of the Israelites between the conquest of the land of Canaan and the beginning of the monarchy with King Saul.

From events we find later in the book, we can place this more precisely about twelve hundred years before the time of Jesus. At that time, because of the famine, Elimelech and his family left Bethlehem to live in Moab. Elimelech’s family consisted of his wife, Naomi, and his two sons, Mahlon and Chilion. Our text mentions that they were from “Bethlehem in Judah.” That is a place you may know.
It’s rather ironic that Elimelech left Bethlehem for Moab. The name Bethlehem, as I have mentioned in the past, means “house of bread” in Hebrew. It was the town where the one who is the Bread of Life (You know…Jesus) would be born about twelve centuries later. To further the irony, Elimelech and his family were going to a country on the east side of the Dead Sea whose inhabitants had refused bread and water to the Israelites when Moses was leading them as they wandered in the wilderness. It is weird that they would go to a place that was not fond of Israelites, but the family found enough there to live ten years in Moab.

Now Ruth is a book in the Bible that shows how God guides and leads His people, and does His will. Sometimes in our lives, it is hard to see that. During their time in Moab, the two sons of Elimelech married Moabite wives—which is something they weren’t supposed to do. The Israelites were forbidden to marry Canaanites, and warned in general against marrying wives who were not Israelites. The reason for this was not racist, it was not a fear or dread of foreigners (what today we call xenophobia), but a concern to keep the Israelites from worshiping false gods. The very real probability that non-Israelite wives could lead their husbands astray is seen later a hundred times in the Old Testament, for example, in the life of Solomon.

When I tell you here that Elimelech, Mahlon and Chilion all died in Moab, you might wonder where God was in all this. Once again we might not think that God’s work was very obvious, since neither Mahlon nor Chilion had children, and they and their father died in Moab. But God continued to do His thing.

With the three men’s deaths, Naomi was left with her daughters-in-law, Orpah and Ruth, all of them childless. When Naomi heard the famine around Bethlehem was improving, she decided to return to her hometown. Naomi’s two daughters-in-law decided to go with her.

On the way back to Judah, there was a discussion between Naomi and her daughters-in-law. Naomi wanted them to stay in Moab. Her daughters-in-law insisted, “No, we will go with you to your people” (v 10).
Naomi attempted to change their minds. There was, she knew, the law of levirate marriage given in Deuteronomy. According to this law given by God, the brother of a man who had died would marry his brother’s wife, and the first son born would be considered to be the son of the brother who had died. But Naomi had no other sons, and it was not likely that she would have more sons who could eventually grow up to marry her daughters-in-law. There was not a reason for these gals to go with their (former) mother-in-law, except to keep her from being alone. To be nice.

We can see both sides to this discussion: Naomi was right in believing that there was little prospect in Judah for finding future husbands (besides being too old to have more kids, both her daughters-in-law were non-Israelites, so she could not expect to find husbands for them easily.) Orpah and Ruth were not wrong: although they probably had more prospects for the future back home in Moab, they also loved their mother-in-law, since they were now “family.”

The conversation was resolved when Orpah stayed in Moab. But Ruth stayed with Naomi. Ruth makes here a not-so-subtle change in reference to the Israelites. Although earlier she had said, with her sister-in-law, “We will return with you to your people,” Ruth now says to Naomi, “Your people shall be my people, and your God my God” (v 16).

Ruth is now saying she was a part of the people of God. She declares that the true God is now her God; her allegiance was no longer to the false gods of Moab, but to the true God of Israel. We pause and note here that as God’s hand guided Ruth away from Moab and toward Judah, we know God is always with us, even if life puts us on a new path.Our reading ends with the return to Bethlehem: “So the two of them went on until they came to Bethlehem” (v 19). For Naomi, these were familiar surroundings; for Ruth, they were completely new. Just as God had begun leading her as she married Mahlon, He continued leading her on her life’s path, now as a part of the people of Israel, a path unknown to her up to this point in her life.

Although our reading ends here, the story does not end. God keeps doing His thing, so we want to mention briefly what happens next.

Mosaic Law required land that was lost to a family be redeemed (Leviticus 25). The land that Ruth should have had because of her marriage to an Israelite was someone else’s now because Elimelech and his family had left. That land would stay someone else’s unless it was purchased and given to her by a close male relative. That person was a guy named Boaz. As it turned out, he not only redeemed the land, but he ended up marrying Ruth. She later gave birth to a son, and that son ended up being the grandfather of King David and an ancestor of Jesus Christ.

Ruth, a non-Israelite, was an ancestor of Jesus. That was a path that she could certainly not have expected. God was with Ruth on all the paths she took, delivering her from being a childless widow to becoming an ancestor of Jesus Christ. Outstanding.

Ruth is just one example of how God has guided His saints, His people in the past. Even though God often sends His people on paths that are new and unexpected, there is no need for us to be afraid of getting through those unknown paths and hidden dangers. We see how the Book of Ruth points us to Jesus. We know how Jesus was sent here to redeem us, to take away our sins, to die and rise again for us and all that good Gospel stuff. And we know that Jesus promised to be with us always, until He comes back here or brings us to Him. When our lives take turns that are unexpected, we can be tempted at those moments to think that God has forgotten us or left us. But that’s not true. What happened to Ruth showed us and reminds us that God always keeps His promise to take care of His people. We know that we can always trust in that promise, too.