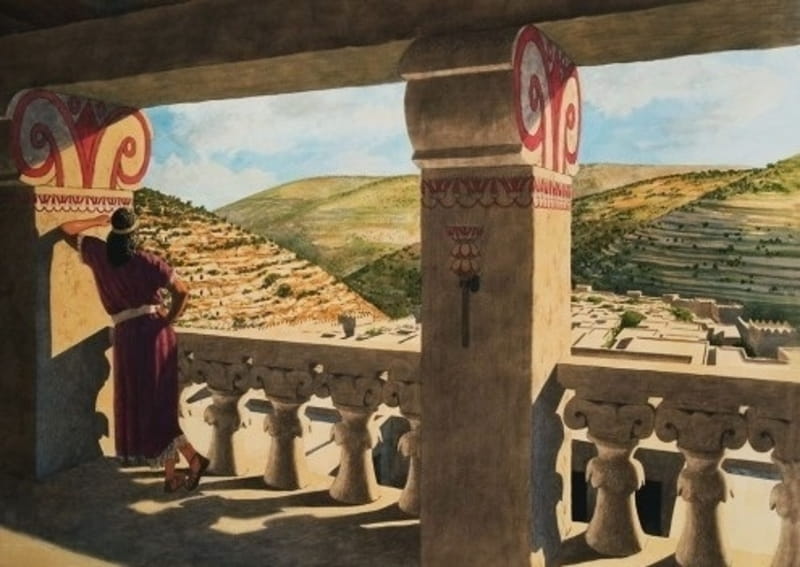 When you look at the history of this country, one sees a lot of politicians, presidents, presidential candidates, who got swallowed up by a good sex scandal. The folks in D.C. and across the country love a good sex scandal. FDR had a mistress, or so we are told. JFK had an affair with Marilyn Monroe. Gary Hart and Donna Rice. Bill Clinton and Monica Lewinsky. Congresswoman Omar seems to be in one now. This stuff sells papers (well, used to), this stuff gets TV ratings and internet hits. And this is not a new phenomenon.

All the way back in 1000 B.C., there was a huge sex scandal in Israel, when the King had an affair and got caught. And this was really salacious because of who the king was. Today we note that the guy who killed Goliath, and was a man, a king, after God’s own heart, that David was the man. Today, our topic will be David and Bathsheba.

When we last left David, he had killed Goliath. To tell everything that is in the Bible about David would put this sermon over an hour, but to summarize I can tell you that even though David had rescued Saul and all Israel against Goliath, Saul had a funny way of showing his gratitude. When David beat Goliath, he got to marry one of Saul’s daughters, he was made a commander in the army, his best friend ended up being Saul’s son Jonathan, and David went to battle, winning every time. The folks in those days liked to say on Twitter, “Saul has slain his thousands, and David his tens of thousands.” Saul was not pleased with this. The Bible tells us that there were many times Saul tried to kill David or have him killed, but God had big plans for David. Eventually, while David was hiding from Saul, Saul and the Israelites fought the Philistines again, and Saul and Jonathan were killed in that battle.

David had been anointed king before he killed Goliath, and Judah recognized him as king. It took some time, but eventually, David won over the other tribes, all Israel saw David as the king, David led the army against all enemies and won, and also took Jerusalem which he made his capital city. It all sounded good, as we have read this over the years. But there was a problem. David was not perfect. He had a thing for the ladies.

The Bible tells us that one spring, David stayed behind when the Israel army went off to fight. He should have been there with the troops. That’s what kings did in those days. But he stayed home. He was getting kind of bored. And one afternoon he went for a walk on his roof (which was the palace patio), and he saw a beautiful woman taking a bath.

David started doing the whole, “hubba, hubba” thing, and he asked his staff to find out who she was. He was told she was the WIFE of Uriah the Hittite, who was a commander in Israel’s army. And I can just hear this guy emphasizing the word WIFE when he told his king this information. They all knew David’s weakness. We know that David was a serious polygamist, which was not God’s plan for him. I believe he had five wives (and more girlfriends/concubines) at this time. But David did not hesitate. He ordered that Bathsheba be brought to him in the palace. When she met with him, things went too far, she left and sometime later notified him that she was pregnant.

There were some big problems now for David and Bathsheba:
1. In the Old Testament Law, Adultery had the death penalty (can you imagine that today?).
2. They couldn’t pass the kid off as Uriah’s because Uriah was at the front fighting in a battle against the Ammonites.
3. This was a major sin against God, and Uriah.

David was in a bit of a pickle here. This was the solution he came up with. He recalled Uriah from the front line and pretended that he had brought him home to get a report on the battle. When that was done, he told Uriah to go home, figuring that he and his wife would have a reunion, if you know what I mean. But Uriah refused to go home. He slept that night on David’s front porch, because he felt that while his troops were in battle, he shouldn’t have the privilege of something they did not have. (Uriah was a good guy.) Then David had Uriah over for dinner and got him drunk, hoping he would go home. Again, Uriah slept on David’s front porch.

Next, David did something really awful. He sent Uriah back to the front with a letter to Joab, the commander. David told Joab to put Uriah where the fighting would be the worst, and then have the troops with Uriah retreat without him knowing that was going to happen. Joab did as David instructed. And Uriah was killed.

Bathsheba then observed the traditional period of mourning. When that was complete, David took her into his house, made her wife number 6 or whatever, she had the kid, and everyone assumed it was David’s. He also got a PR boost and higher approval ratings in the Gallup Poll because it looked like he was showing mercy on a war widow, instead of covering up his sins/crimes.

David was guilty of a lot here: Coveting his neighbor’s wife, lust, adultery, a conspiracy to commit murder, and the cover up that followed. AND, David thought he got away with it. He thought nobody knew what he had done.

God sent the prophet Nathan to confront David. This took some courage on Nathan’s part by the way, going to tell a powerful and popular king, to his face, that he was a sinner. Nathan did it. He told David how God knew all about his sins, and he was going to be punished for it. (The baby died, and David’s family was messed up worse than the Kardashians.) David, to his credit, did not make excuses. He did not lie, like the 42nd president of the United States. David said, “I have sinned against the Lord.” Nathan told him that the Lord had put away his sin, and because of David’s repentance, he was not put to death. But the punishment still happened.

While David was punished greatly for his deeds, as God said, I also have to note that David and Bathsheba had another child, Solomon, who ended up being the king after David.

Now we are at the point where we ask, what does all this tell us? First of all, I think we are often tempted to think that when we have done something wrong, and no one else found out, we think we got away with it. We need to remember that everything we do, the good and the bad, is known by God. There is nothing we have done or will ever do that we will “get away with it.”

We also have to note here that as we see with David, when things are going really well, that’s a time Satan likes to strike. And we see in David’s tale how it is with us that when we think we can indulge in some “harmless little sinful thoughts,” those thoughts can lead to many more sins. David started with a little lust and ended up a murderer.

But we see something else here. When we go to God in true repentance and sorrow for our sins, we are reminded that God is a God of love who sent His Son Jesus to die for our sins and rise again. We have been gifted with faith, forgiveness, and eternal life because of what Jesus did, because of what God gives. This does not give us permission to sin as much as we want, thinking all we have to do is say, “Sorry, God,” and we can go back to sinning. That is NOT the life of a Christian. But we do know that in faith we have forgiveness of our sins though the death and resurrection of Jesus.

And one other thing, if you are bothered that David’s first son with Bathsheba died, you are overlooking the fact that he died for his dad’s sins. And Jesus, who was David’s great-great-great-great-great grandson, did that (died) for everyone. As we live each day, good days and bad days, it is my prayer we will all do so, knowing how blessed we are that He did.