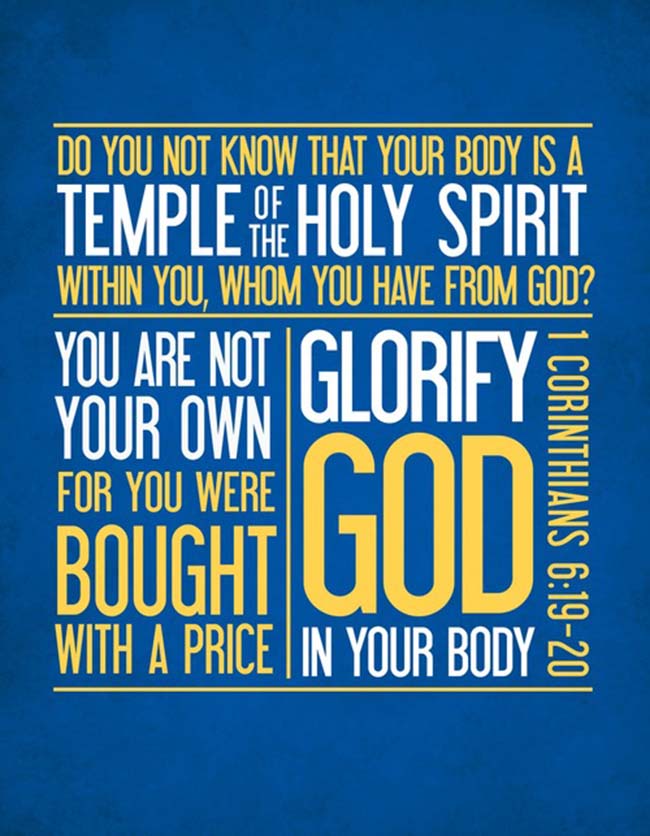 You can learn much from body language. If someone is sitting here with their feet out, head back, their body language tells me they are not really listening. If someone is sitting up straight, looking at me like this, they are probably unhappy about something here. I remember going to my campus church in Madison years ago. When we did a “Folk” service we used three different books and worship sources. I always sat on the front row, admittedly a very un-Lutheran thing to do, but the music leader at the church saw my dad’s frustration that Sunday in not being able to follow along in the service. My dad’s body language told him that.

In our text today, St. Paul uses “body language” as he writes to the Corinthians. Let’s look at our text, at the body language Paul uses. We’ll learn that God Created Our Bodies to Be United with Christ, to Be Temples of His Spirit, and to Give Him Glory.

St. Paul knows that the Corinthians had been using improper body language in order to try to justify their sexual sins. Remember Corinth two thousand years ago made Vegas look like a town full of monasteries. They’d distorted the language of Christian freedom, saying, “All things are lawful for me” (v 12), thinking that since Jesus redeemed their souls, it really didn’t matter what they did with their bodies. They distorted the language of creation, saying, “Food is meant for the stomach and the stomach for food” (v 13), thinking that since God made our bodies the way he did, they must be made for sexual immorality just like the stomach is made for food.

Now we can sit piously in our chairs or I can stand pompously here in the pulpit, point our fingers at the world, and say, “You tell ’em, Paul! That’s exactly the kind of world we live in.” But Paul wasn’t writing to pagans. He was writing to Christians being influenced by a pagan world. We need to take a look and see how we are doing with this.

Do we not sometimes distort the language of Christian freedom? We play the dangerous game of thinking, “Well, God will forgive me,” as we decide to do a sin. We distort the language of creation, justifying a variety of addictions and sinful actions by saying: “This is just the way God made me. It’s not my fault.” Yes, shame on the Corinthians and shame on our world, but also shame on us. We need to listen to Paul and learn about proper body language.

Paul gives us that as he goes on, “The body is not meant for sexual immorality, but for the Lord, and the Lord for the body” (v 13). God created our bodies to be united to Him. He gives us that in Holy Baptism. There He unites us with Jesus’ death, crucifying our sinful nature. There He unites us with Jesus’ resurrection, giving us new life now and the assurance of eternal life and the resurrection of our bodies (v 14) someday. God unites our bodies with Christ. As Paul says, “Do you not know that your bodies are members of Christ?” (v 15a). And in v 17: “But he who is joined to the Lord becomes one spirit with him.” The only conclusion we can draw from all this is that it is improper body language, it is wrong to use these body things, to take that which is united to the Lord and engage in sexual sins, in any sins.

Think of it this way. Many of us have afghans or quilts our grandmothers made. Christopher has a quilt that my grandmother made decades ago that I ended up with somehow. Would we dare take that which she intended to keep us warm and wrap it around a pig (or a muddy dog), or use it to mop a dirty floor? Never! Paul said “Shall I then take the members of Christ and make them members of a prostitute? Never!” (v 15b). God created our bodies for the Lord, to be united to Him, not sin.

The Corinthians also used improper body language in thinking that their bodies were actually their own and, therefore, that they could do whatever they wanted to do with them. We have modern-day equivalents, don’t we? “I have a right to do what I want with my own body” and “My body, my choice.” We hear this rhetoric from those who argue for the right to abortion, something that gets talked about a lot on Life Sundays such as this.

And again, let’s not just point out there, let’s look in here. We use such improper body language to justify all kinds of things—overeating or overdrinking or lack of exercise or risky behavior. “Hey, it’s my body! I can do what I want.” I realized I could not preach this to you very well when I weighed 220 pounds. I realized I needed to make some changes and I have. Still working at it.

If you ever doubt your value or wonder about your worth and purpose, remember Paul’s body language and apply it. The language of unity tells you that God created your body for the Lord; in your Baptism, He united your body with Him. The language of ownership tells you that in your Baptism, God bought you, removed your sins, and declared you holy. Your body is now the very temple of God. Once we get this, this body language, once we see how much God loves us and how valuable and holy He made us in Jesus Christ, we have the foundation to deal with Paul’s admonition: “Flee from sexual immorality” (v 18a). It has to do with the body language of glory.

“So glorify God in your body” (v 20b). God made us and took away our sins so that we would physically give Him glory, worship Him. Do you see what a positive motivation this is to flee sexual sins? It’s much more and much better than “Don’t do these things because they’re bad!” It’s “You don’t have to do these things because God is good and loves you, has saved you, and wants you to do better things with this (the body).” Allow me to apologize to you young people and singles here today for the way we in the Church sometimes treat you—as if you’re nothing but a bunch of raging hormones! You may be that, but you are so much more. I know Hollywood also likes to depict you this way, but I am here to tell you that God created you in your mother’s womb. God created you and then in Baptism united you with Jesus. He purchased you with His blood and declared you a holy place, where His Spirit is pleased to dwell. You can make good, God-pleasing decisions! You can glorify God with your body language. The same goes for married folks. We, also, are to “flee sexual immorality” and remain faithful to one another.