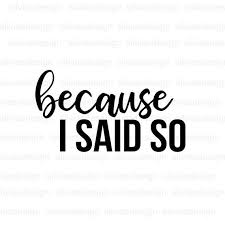 Do you remember when you were a teenager, or a little younger, and you thought to yourself that your parents were so “unfair” and they didn’t “understand” you, so you said to yourself that when you had kids of your own, you would do everything different? When I was a kid, and my dad told me to do something and I had the guts to ask why, his favorite answer was, “Because I said so.” And now my kids will ask me why sometimes, when I tell them to do something. You know what I tell them? “Because I said so.”

Here is why I say that. In the text, Paul reminds us that because God said so, we are justified by faith in Christ (v 1a). Now that is a pastor word there. Let me explain “justified.”

We start with sin. We’re not just, righteous, sinless, on our own. We sin. We do a lot of things wrong. More than we want to admit, that’s for sure. All we can do on our own is to live in a sinful, do-bad-things way. By nature, we rely on ourselves to meet our needs—a “pull yourself up by your own bootstrap” type of thinking and living. But we can’t save ourselves.

When we live like this, we’re separated from God. When we live like this, we are literally “ungodly.” We are not allowed to look in the mirror and say to ourselves, “I’m a pretty good person, better than insert name here.” We’re not! When we look at our lives in the mirror of God’s Law, we know that God sending us to hell would be right, would be just/justice. We know, deep down in here, that God has the right to be mad at us. We haven’t kept the Commandments perfectly—or even come close. Anytime we hate, anytime we hurt someone, anytime we lust for someone we are not married to, any time we use software we have not paid for, anytime we use bad words, anytime we skip church…and I’m just getting started…you get the picture? We stand guilty before God. Without Jesus and all the Bible stuff, there is no way we could honestly say, “I’m just,” or “I’m good.” We deserve to hear God say, “Because I said so,” as we’re sent off to hell.

Yet instead, God says, “You’re justified.” That means He says to us, “You’re not guilty.’’ The word Paul uses in Greek here is a legal term for being declared not guilty. How can that be? Because “Christ died for the ungodly” (vv 6–8), and that would be us. Jesus went to the cross and paid the price for our sin—all of it. And God counts that for us. So we are justified! We are forgiven!

Here is a way to illustrate justification. It seems that there was a man in England who put his Rolls-Royce on a boat and went across the English Channel and to the continent to go on a road trip/vacation. While he was driving around Europe, something happened to the motor of his car. He contacted the Rolls-Royce people back in England and asked, “I’m having trouble with my car; what do you suggest I do?” Well, the Rolls-Royce people flew a mechanic over! The mechanic repaired the car and flew back to England (No bill) and left the man to continue his holiday. As you can imagine, the guy was wondering, “How much is this going to cost me?” (Oil change for a McClaren P1 is $8,000.) So when he got back to England, he wrote the Rolls-Royce people a letter and asked how much he owed them. He received a letter from the office that read: “Dear Sir: There is no record anywhere in our files that anything ever went wrong with a Rolls-Royce.” That is justification. God looks at us and does not see our sins. We are not guilty, because He said so.
There is another key word here: that we are “justified by faith.” Faith is believing in things unseen and trusting they’re true (Heb 11:1)—even when they don’t look the way God said. God said we’re justified—that our sins are gone, but we still don’t look that way—to ourselves or to anybody else. We still do bad stuff. Our sinful nature still believes we have to straighten things out, get ourselves right, get our act together, to be good with God. And our sinful nature often thinks we can do that—that we’re OK because of what we do.

So faith is believing we really are already justified, we are right with God. Because of Jesus’ death and resurrection for us, God really has said: “You are not guilty. You are right with me.” The faith the Holy Spirit brings us believes that, trusts that. Those who don’t believe that, who still think they have to get themselves right with God or think they’ve already made themselves right with Him, who think their works save them, will find out the hard way we can’t do that. But those of us in faith have what God says we have, right standing with Him now and forever—because He said so.

Let’s wrap this up in this way today. Ken Klaus of the Lutheran Hour wrote about how ten years ago 32 year old Bruco Eastwood went to Deer Creek Middle School in Littleton, CO with a bolt action rifle and opened fire. Bolt action means that he had to take the time to reload the weapon after every shot. David Benke, a math teacher in the school, used his math skills to calculate that he had time to tackle and disarm the shooter before he could reload. Mr. Benke risked his life to save the kids in the school. It was a calculated risk he was willing to take. He was a real hero.

Usually when a parent says those words the meaning is negative, not positive. It is true that God uses the phrase that way when it comes to the Ten Commandments. But above all, it’s true that He uses these words to reassure us of what He’s done and continues to do for us because of the cross of Jesus. You are saved. You are forgiven. You have been found “Not Guilty” by Judge God. How can we be certain? Because God said so!