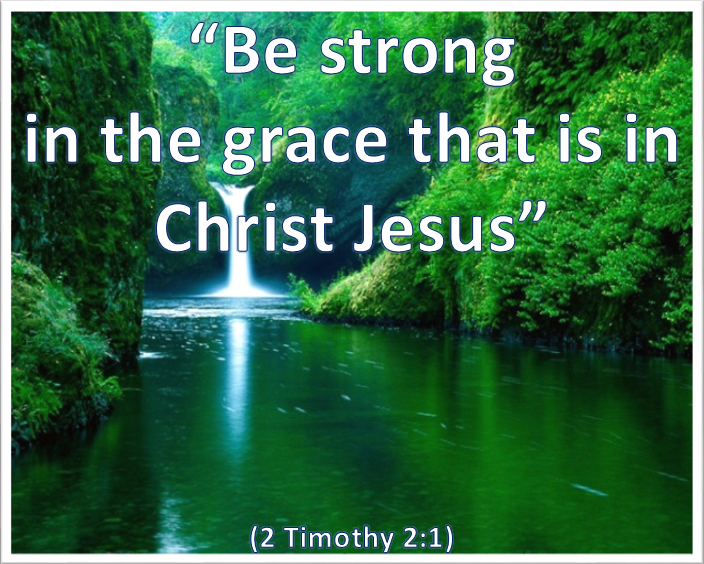 Have you noticed that people who work at cash registers are kind of bossy?  They are.  A lot of times I put down my stuff, get out my credit card, take the bag and they say, “Have a nice day.”  That’s an order!  Right?  Or they say, “Come back and see us.”  I read about, but have never heard this myself, that Walgreens® checkers are told to say, “Be well!” See what I mean?  Bossy.

For a checker, commanding us to “Be well” is a curious way to say good-bye. Not only because it is a command, but because of the kind of command it is. Be well? If it was in my power to do that, why would I be visiting a pharmacy? I cannot make myself well; that is why I go to Walgreens®.

Paul seems to give a similar command to Timothy here in the Epistle reading.  He said, “Be strengthened.” Yet Paul does stop there.  He does not act like a drug store checker.  Paul can’t do that.  Because he knows that Timothy does not have the power within himself.  Timothy’s strength must be found outside of himself—in “the grace that is in Christ Jesus.” That’s Paul’s word for us today too:

Be Strengthened in the Sure Promise of the Grace That Is in Christ Jesus.

To stretch the drugstore analogy just a little more, it must be emphasized that though Jesus is indeed the “Great Physician,” He is not the great pharmacist. “You then, my child, be strengthened by the grace that is in Christ Jesus” (v 1). That is, we are not to think of the grace of our Lord as a sort of medicine simply given out by Him, which then becomes ours. He does not give us what we need and then disappears.  No, as Paul here notes, it remains in Christ Jesus.

If you’ll pardon some pretentious sounding Latin, the grace of God is, as the reformers understood and insisted, the favor Dei propter Christum—the favor of God, on account of Christ. In other words, it is not a “thing” in you; it is something God does, it is the gracious attitude or disposition of God Himself toward you. On account of Christ, who obeyed the Law instead of you and who suffered its fatal penalty in your place on the cross and rose again, God no longer looks at you as one who is guilty.  We are covered in the righteousness of Jesus.  To believe this, to know that this is most certainly true, is to be strengthened.

Timothy needed strengthening. As you’ve heard in the text, Paul is suffering; he is “bound with chains as a criminal” (v 9). He expects those chains to come off only when he’s dead. And he expects that to be soon.  (4:6). This is no small thing. Not for Paul, that’s for sure. And it is not a small thing for Timothy, either.  For Paul is his mentor, the one who ordained him, the one with whom he worked side-by-side in the ministry of the Gospel. (I have to admit that I can relate to this.  One of my mentors, the pastor who preached at my ordination, passed away two weeks ago.  While I know he is in heaven, Erica will tell you that news got to me a little.)  In the text, Paul is noting that he knows his suffering is also Timothy’s suffering.

So he needs to be strengthened.

That is also true for you, my brothers and sisters in Christ. Perhaps not because your believing or sharing Scripture and its teaching will lead to your imprisonment—though we cannot say that is impossible here someday.  Not because sharing the Good News with your neighbor or co-worker will result in your death, which is what happened to Paul. But I cannot sugarcoat it any more than St. Paul does—or Jesus Himself does. Jesus warns us in Mt 10:22: “you will be hated by all for my name’s sake.”

You, too, must be strengthened, because without the strength that God gives, it would be easy to avoid suffering, to escape the world’s hatred. And the temptation for us to do this is very strong.  And we can avoid this kind of suffering without giving up our faith.  You know where I am going with this?   Paul is not in chains when he wrote our text because of what he believes, but because of what he preaches. The world will not hate you, it will not persecute you or even insult you, for what you believe—as long as you keep it to yourself.

Paul said to Timothy, “You then…be strengthened by the grace that is in Christ Jesus, and what you have heard from me in the presence of many witnesses entrust to faithful men who will be able to teach others also” (vv 1–2). You are strengthened to endure so that you might share this saving Word with your neighbor, and then they can share it with their neighbors.  But it remains God’s Word. He Himself acts in it and with it. And He remains faithful to it, “for he cannot deny himself.” At the end of our text it says, “The saying is trustworthy, for: If we have died with him, we will also live with him; if we endure, we will also reign with him; if we deny him, he also will deny us; if we are faithless, he remains faithful— for he cannot deny himself” (vv 11–13).

Let this, then, also be the source of your strength, your comfort, and your confidence. Even in the face of people’s hatred, of suffering, or even threat of death (God forbid!), your salvation has already been assured. “Remember Jesus Christ,” Paul proclaims, “risen from the dead” (v 8). Remember Him who, for your sake, has already conquered death. Remember the “trustworthy” saying Paul places before Timothy: “If we have died with him, we will also live with him.” And remember that you indeed have already died with him in Holy Baptism. There you were buried with Him and raised again with Him (Rom 6:3–5). There His Word together with the water unlocked your handcuffs, de-shackled you, as it were from sin, death, and the devil. There His promise was spoken to you and for you, and to that promise “he remains faithful—for he cannot deny himself.”

Now I don’t mean to sound bossy, well…maybe I do…be strengthened, therefore, in the sure comfort of the promise of “the grace that is in Christ Jesus.”

Adapted from a sermon in Concordia Pulpit Helps, Vol. 26 Part 4.