“Attack in Any Direction”

“Attack in Any Direction” 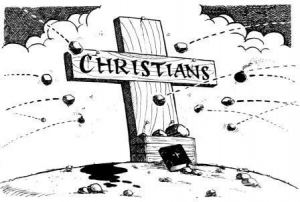 Under Attack?  Attack in Any Direction

Have you ever heard of the “Battle of the Bulge”?  I am not talking about the battle many of us wage who are trying to lose weight.  I am talking about Dec 16, 1944. That’s when hundreds of German artillery pieces opened up on American positions. Over 250,000 German soldiers marched in; 1,000 tanks rolled through. The Nazis’ goal was to take the city of Bastogne and then, if their luck held, reclaim Europe. By Dec 20, American troops under the command of General A. C. McAuliffe were surrounded. Two days later, the Germans called for his surrender. History records his blunt reply: “Nuts.”

Meanwhile, history has almost ignored the words of a young soldier, a private from the South. He was also in Bastogne. You’d think he would have been shaking in his boots. He wasn’t. He seemed so incredibly calm that his sergeant asked him a question, “You do understand the Krauts have us surrounded, don’t you?” “Yup. I get that, Sarge. . . .but if I un’erstand kirrectly, this is the first time in this war we kin attack the enemy any direction we want.”

Today, in a different war, in a spiritual war, Christians find themselves agreeing with that private. In our day, Jesus’ followers are also able to say: “If we understand correctly, we can attack the enemy in any direction we want.” We are surrounded by unbelief.  Although we’re saddened to make such a statement, we’re not surprised. We’re not surprised because, centuries ago, St. Paul said the day would come when the Savior’s people and His message of salvation would find themselves under attack. Speaking by inspiration of the Holy Spirit, Paul said, “The time is coming when people will not endure sound teaching, but having itching ears they will accumulate for themselves teachers to suit their own passions” (4:3). With this prophecy in mind, knowing that we will be attacked for our faith, we learn from this Epistle that we are really also on the attack, that now We Preach the Word in Every Direction.

Having made this prophecy, and so God’s people might be prepared for the attack, the Holy Spirit described what this day would look like. Listen to the Lord’s list, and see if His warnings don’t accurately describe things these days.  First: God says everyone who wants to live as a Christian is going to be persecuted (3:12). Second, enemies of the cross, that is, pretend pastors and preachers, will deceive God’s people just like the devil has deceived them (3:13). Third, the truth of God’s Word is going to be ignored (4:3–4). People will find man-made myths more acceptable more palatable to their spiritual appetites.

Paul seems pretty accurate. What do you think? Since I see some hesitation on some faces, let me explain how our generation’s unbelief is larger, stronger, better organized than it has been in the past. To do that, I encourage you to study God’s Word. If you do, you’ll quickly find that while other sins seem to rise and fall in popularity, man’s thinking that he could do better than God has never gone out of style.

In the Garden of Eden, Satan inferred that the triune God had been lying to our original ancestors. Adam and Eve agreed and tried to take control. The builders of Babel began their work with a verbal challenge to God’s authority. During the wilderness wanderings of Exodus, Moses found he couldn’t take a step without the children of Israel complaining, criticizing, and condemning the Lord. Although these people of Scripture nagged and nitpicked at God’s graces, it’s our generation that has taken humankind’s disapproval of the Lord and raised it into an art form.

True, other times and other civilizations have taken shots against God, but they usually did so with some degree of hesitation. That’s why, in Psalm 53, David’s choirmaster would write, “The fool says in his heart, ‘There is no God’ ” (Ps 53:1, emphasis added). Yes, those fools denied God, but it seems their denial was done in their hearts and not with their tongues.

Our time is different. Our century has seen the rise of an attitude of ingratitude, the development of a gleeful spirit that denies God’s great grace and disparages His hand in the affairs of men. Today, it’s become fashionable, trendy, and stylish for average, common folk to say there’s no God. Amazingly, they don’t make this claim with any hesitation. On the contrary, they spout their lies with a smirk, a smile, a boast. Colleges founded by Christians for the purpose of educating Christians no longer feel shackled by the old-time Bible “myths.”

Countries that were founded by Christians and whose stability, success, and legal system were based on the Holy Bible now find it is politically correct to keep their distance from anything that smacks of Scripture or makes reference to the Redeemer. Fanning the flame of doubt, adding fuel to the fire of denial, are TV shows, books, movies, magazines that make big money by disrespecting the Deity.

But there’s more.  Should we speak about the pseudo scholars who’ve stripped Christ of His miracles, scratched out His teachings, and rebranded Him as a social worker and not the Redeemer? Should we mention those who’ve made the Savior into a warehouse Santa whose job it is to give us stuff and more stuff, who’ve made Him a good guy rather than God’s great gift of grace? Should we speak of those who’ve denied doctrines of Scripture and substituted their opinions? Should we speak of countries that have declared conversion to Christianity to be a capital offense, where Christmas and Easter worshipers become targets for murderous militants? Should we talk of those who have, in spite of obvious and opposing differences, declared all gods to be the same, all heavens the same, all paths to forgiveness the same? Truly, the time of which Paul spoke in our text has arrived. People no longer endure sound teaching, but prefer to find teachers who tell them what they want . . . and what they want bears no resemblance to God’s inspired, inerrant Word. Or, if you prefer it a different way, “If I understand correctly, this is the first time in this war we can attack the enemy any direction we want.”

Still, I wonder, is attacking the enemy what the Lord wants His people to do? Why not just quietly coexist and know what we believe, even if nobody else agrees? Just keep the peace. Years ago, there was a cartoon that was going around.  The first panel showed a rough-looking fellow who was walking through the streets of Sodom and Gomorrah. He carried a sign that read, “Repent! The end is near.” The second panel showed the man being asked, “Why do you carry that sign? You’ve been carrying it for twenty years, and it hasn’t made any difference.” The last panel showed the sign-carrier’s reply. He said, “For the first nineteen years, I carried the sign in hopes that I would change them; now I carry it in hopes they won’t change me.”

In many ways, that cartoon explains what we Christians are to do. This church, this pulpit, is here so we can tell the sinful world just how much God cares for them. We exist so the Spirit can use us to reach out and let them know there’s good news and great joy that has come into this world in the person of Jesus Christ. We come together so that we may go out together and let them know this: “No matter what you’ve done wrong, no matter the magnitude or multitude of your sins, Jesus Christ has fulfilled all of God’s laws for you. He has resisted temptation for you, He has carried your sins for you, and He has, unfairly and unrightly, died for you. Now, with Holy Spirit-given faith in the risen Redeemer, you are forgiven, saved, and strengthened. As one of His pardoned children, you have been rescued from your punishment and have been given a new life, a life where sin, death, and Satan no longer own or control you.”

During the Civil War, as General Lee’s Confederate soldiers were coming up toward Gettysburg, one local lady—Hannah was her name—felt she had to do something. Having nothing else to use as a weapon, she grabbed the broom from her door and started walking down the road to meet the enemy. Eventually, Hannah encountered the Confederates, who gently brushed her to the side. Some years later, at a quilting party, the Gettysburg ladies recalled the fight and had some fun at Hannah’s expense. One of them asked, “Hannah, what in the world did you expect to do with your old broom against that great Southern army?” “Well,” said Hannah, “I didn’t think I would slow them down, but I wanted them to know what side I was on.”

Standing fast, preaching the Word, showing them what side we’re on. Any way you say it, our job is the same. We stand fast when everyone else is deserting; we share God’s truth to counter the devil’s lies. We preach the Word. It is who we are. It is what we do. By God’s grace, may it always be so.