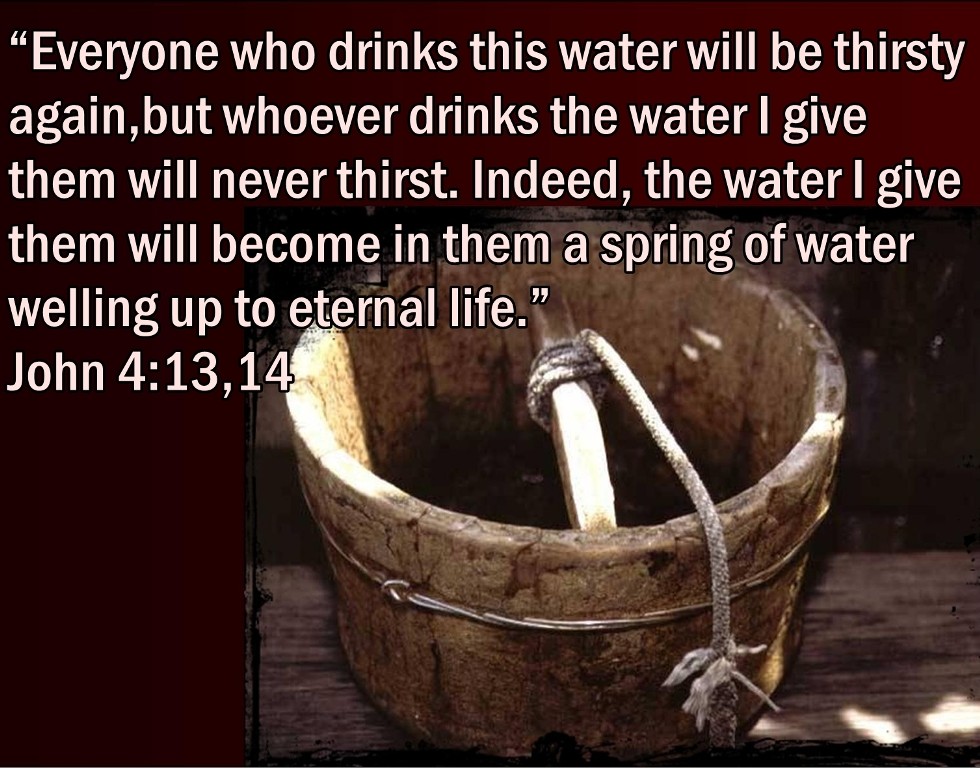 When was the last time you were really thirsty?  For me it goes back to college days.  I, like two of my brothers before me, marched in the UW Marching Band.  Practices were two and half hours and they could be grueling.  We didn’t just walk around the field.  There were high school football champs in this band who said these practices were the toughest thing they did. My sophomore year, I lost 15 pounds in the first four days of practicing. It was my habit that after practice, I would go back to my dorm room, and drink two cans of orange crush and a half gallon of water, before I sat down or did anything else.  What can I say?  I was thirsty.

In my research for your sermon today I found out that a lot of people can be thirsty and not realize it.  The medical evidence is in and it can be dangerous. Dehydration is a serious problem and one not necessarily perceived. At least 75 percent of Americans are chronically dehydrated. It’s the number one reason for daytime fatigue. Not enough water makes for a fuzzy-thinking brain. Would you believe that you can reduce your risk of colon cancer by 45 percent with more water in your system? Migraines, back pain, and even breast cancer have been associated with thirst that many people don’t realize they have.

Could the same be true, not knowing what you need, when it comes to the things of God? The Bible also talks about thirst, especially thirst of the spirit, thirst of the soul.  Have you ever been, are you now, thirsty like that? Are you thirsty in the way that woman at Sychar’s well was, the day Jesus had the nerve to ask for a drink?

You may be wondering why I just put that that way, but three things were going wrong, breaking “the rules,” at the beginning of our Gospel text: 1) a man talking to a woman He does not know, 2) Jesus a Jew, talking to a Samaritan, and 3) a Jewish fellow talking theology to a Samaritan woman.  That’s three strikes, and the conversation shouldn’t have even gotten off the ground, but it did. It had to. It was the destiny of God’s Son to seek and to save the lost.

Gently, but persistently, Jesus exposes this woman to the thirst she didn’t even know was there down deep. The whole dialogue is a conversation two thousand years ago that sounds like it happened today.

Here’s the thing: our lady at the well has a set of religious beliefs about as confused and modern as Pi in the movie Life of Pi. I do not know how many of you saw that movie, but the central figure believed in Christianity, and Hinduism, and Islam.  Pi believed in a mish-mash of things.  When it comes to the woman in our text, we could call her religion “Samara-mush.” Like so many today, she’s interested in spiritual things, but that doesn’t mean she has faith in the biblical sense. She knows something about religion but nothing about faith, real faith in God our Father. She can quote, or at least cite, important facts from her religion, but she does not apply these things to how she lives her life.  Should we be surprised that she could manipulate her beliefs to accommodate five husbands and a man she’s moved in with?

You have probably known people like this.  At a well, a water fountain, a cooler, or a bubbler, we can run into folks frequently who are “spiritual” but they have no real, saving faith in Jesus, in God Himself. They are dehydrated in spirit—that is, without God and without hope in this world.

When Jesus tells the lady to call her husband, He’s not asking for information; He was exposing her thirst, her deep thirst. It’s a thirst that tells us we may be doing what we want, but if what we want isn’t what God wants for His children, we’re getting mighty thirsty.

“Go, call you husband, and come here” is Jesus going right in here and telling this woman she is a sinner who needs a Savior.  This is Jesus telling her that when she thinks “I am basically a good person,” that God does not see her, or us, that way.  The Law destroys everything in here we build up that leads us to think we are okay, we are good.  The Law exposes us before God and His just judgment. We see clearly the how and the why of our thirst. The thirst created by our sin, our own real sin, is seen for what it is, and there’s now no denying that for each of us, without Jesus, without the Holy Spirit in here, we all would be diagnosed as having a totally dehydrated spirit.

Jesus exposed the very place where she hurt. His goal was not to see her rot in hell.  The goal was to bring her to refreshing repentance. For Jesus, who revealed what she was thinking and believing inside, didn’t condemn her or destroy her. Jesus is living up to His name and His job description: to seek and to save the lost.  Jesus Was Coming—and Now Has Come—to Quench Our Deep Thirst.

Sifting through eight hundred years of “Samara-mush,” there was one thing that she said to Jesus that was right.  It was about the Messiah. He’s coming. “He will tell us all things” (v 25). Now, it may be that her version of the coming Messiah did not match the real Messiah before her.  But Jesus had very Good News for her when He told He was the Messiah she was looking for, who everyone was looking for.  He said, flat out, “I . . . am he” (v 26). He made Himself her thirst-quenching business. He could look inside her, expose what He saw, and bring her Grace.  The Lord and Giver of Life, the Holy Spirit, created the non-stop-flowing fountain of faith, faith in Jesus Christ. Faith in Jesus Christ is the soul-satisfying relationship God creates by His grace in people who “hunger and thirst for righteousness.”

The man who had asked for a drink of water, the man who knew everything about her without ever having met her, this man was the Messiah, the promised Savior. She would never be the same. Life can’t be when you know where to go when you’re thirsty and worn out by sin and guilt, and you’re as dehydrated and shriveled up as a prune.

Who would ever want to leave that? Who wouldn’t start and end the day with a good long drink from the well of eternal life?  It meant forgiveness for her.  Forgiveness means the welcoming arms of God, a reception as His child who can say “Our Father” with all boldness, and confidence, and certainty, that nothing in all creation can separate us from His love (Rom 8:35).

That Good News from Sychar’s well meant Good News for Sychar city, too. Forgetting her past, without a thought of her reputation or credibility, she invited others to taste and see for themselves. “Come, see a man who told me all that I ever did. Can this be the Christ?” (v 29). This was plain and simple witness wrapped up in an invitation. “Come, see.”

I read there’s a survey that says a lot of people might be numbered among those in worship on Sunday except for one thing: they were never invited. Friends in Christ, it doesn’t take an evangelism program, and you don’t need to spend a lot of time memorizing a lot of Bible verses. It would appear that the thing most necessary is knowing Jesus has quenched your thirsty soul and wanting to share that Living Water to someone dying of thirst.

Your well is waiting. Are you thirsty?