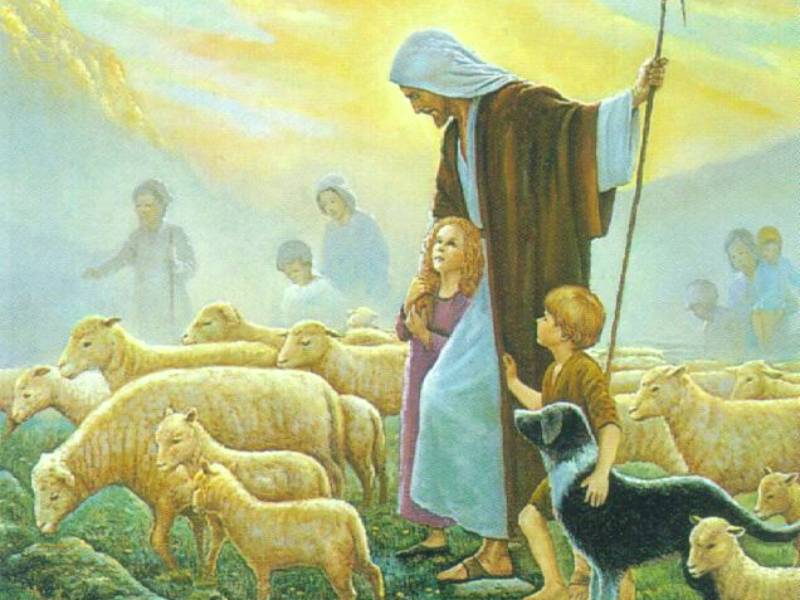 A little boy was lost in a large shopping mall. He sobbed, “I want my mommy.” The mall security people took him under their wing. They treated him to a hotdog, a chocolate milkshake, and a teddy bear to hug. He watched cartoons on the Disney Channel. Eventually, a woman security guard got off the intercom and said to the little boy, “One of the guards has found your mother.” The little boy didn’t miss a beat: “Don’t tell her where I am. I like it here.”

Okay, we get that, right? But even more, we appreciate the mall security staff taking care of business. Somebody’s got to do it. Otherwise we might go merrily on our way thinking everything is just fine when in reality something is seriously out of order. This is a cute story, but how do you think things would have turned out if the mall security never looked for the mom?

In today’s Gospel, the twelve-year-old Jesus was lost—but Jesus wasn’t really the lost one. He was in the right place, in the temple. He was “about the Father’s business.” In fact, He was taking care of business, the Father’s business, for us. He was doing for us what we intend to do, maybe what we think we’re doing . . . when, truth be told, we might actually be sitting back sipping a milkshake and watching cartoons, quite content being about our own business. Thank the Lord, therefore, that, as our text this morning shows us, All the Father’s Business Has Been Done, Done For Us, by Jesus Christ.

No doubt we really do intend to be about our heavenly Father’s business. We try and do what God wants, we mean to. Certainly that was true of Joseph and Mary in our text: “Now [Jesus’] parents went to Jerusalem every year at the Feast of the Passover. And when he was twelve years old, they went up according to custom” (vv 41–42). Mary and Joseph had some important business God had given them to attend. To begin with, of course, they had the business God had given to every Israelite: they were to go to Jerusalem on a regular basis to worship at the chief festivals, especially Passover. What’s more, though, this particularly faithful Jewish couple had the duty of raising God’s own Son in the faith, seeing to it that He was trained in all of God’s Law. This they did. Every year, they went up to the feast. Now this year, with their Son reaching the age Jewish custom called spiritual young adulthood, they took Jesus along. Very admirable, faithful.

We, God’s people here, intend to be about our Father’s business too. This time of year, lots of people resolve, fully intend, will really try to improve this or that—New Year’s resolutions to go on a diet, to exercise, to stop smoking, to limit ourselves to one martini, or one beer. Maybe we’ve made resolutions about spiritual business as well: to follow the example of Mary and Joseph by going to church more. Maybe we’ve resolved to begin regular family devotions, to pray with our spouses and children. Maybe we’ve made a resolution to put to better use our talents in Church, by teaching, singing, volunteering. Maybe you have resolved to start tithing this year, or take a step towards tithing. As believers in Jesus Christ, we really do intend to do these things. That’s being faithful, being about the Father’s business.

So how are we doing? Maybe we think, assume, suppose we’re staying pretty well on task, being about our Father’s business—at least so far, just four days into the new year. Let’s look in again on Mary and Joseph: “And when the feast was ended, as they were returning, the boy Jesus stayed behind in Jerusalem. His parents did not know it, but supposing him to be in the group they went a day’s journey, but then they began to search for him among their relatives and acquaintances, and when they did not find him, they returned to Jerusalem, searching for him. After three days they found him in the temple, sitting among the teachers, listening to them and asking them questions. . . . And when his parents saw him, they were astonished. And his mother said to him, “Son, why have you treated us so? Behold, your father and I have been searching for you in great distress’ ” (vv 43–46, 48).

Remember, Mary and Joseph had a tough job to do! God had given them the vocation of raising the Savior, and boy would they be in trouble if they “lost” Him. You think you would be in trouble if you lost your keys, your wallet or purse? Try losing THE SAVIOR! So surely they felt they were being about the Father’s business when they looked here and there, as Mary herself said, under “great distress.”

We’ve all been lost sometime. It’s scary. At a busy airport, looking for the right concourse for your gate. Driving on the freeway in a strange city late at night and taking a wrong turn. First day at a new school and you can’t find your homeroom. Worse, did you ever lose a small child? The little one let go of your hand for a few seconds, and he was gone as the crowds streamed out of the stadium after a game or at the mall. You’re in a panic. You know your business—Jobs 1, 2, and 3, your only business!—is to find your child!

Perhaps we suppose we’re also being about the Father’s business when we get stressed out over things we know are critical. There is a lot to be stressed about: Emotional hurts. Sickness. Cancer and chemotherapy. Divorce. Death. Terrorism and turmoil. Crime and corruption in high places and low places. Drive-by shootings. And then there are the spiritual things and our relationship with God: Does He really love us? Will our sins cut us off from Him forever? What if I don’t keep all those good resolutions? What if I let the heavenly Father down, fail at His business?

Jesus has a gentle rebuke for Mary’s stressing: “Why were you looking for me? Did you not know that I must be in my Father’s house?” (v 49)—or as the King James Version puts it, “that I must be about my Father’s business?”

Jesus’ rebuke to Mary is a loving one, just as it is to us, because His meaning is to free us from every stress. “There’s no need for you to be anxious,” he’s saying, “because I am about my Father’s business. In fact, I’m taking care of all that business for you.” At Christmas, Jesus came from heaven to rescue us from the hurricanes of trial and trouble. He came to save sin-tossed souls.
Mary and Joseph found Jesus in the temple sitting among the teachers, listening carefully and asking questions that we can only assume were brilliantly insightful. “And all who heard him were amazed at his understanding and his answers” (v 47). That was the Father’s business. God’s Son had been given the vocation of being the Father’s Anointed One, the Christ, the Savior of the world. Already at age 12, Jesus was tending to business, learning everything the Scriptures revealed about His mission.

And, of course, this was only the beginning. Jesus would perfectly understand everything the inspired prophets had written about Him—that He would do battle with Satan, perfectly keeping the Law His brothers and sisters and all people had failed to keep; that He would work miracles of love, healing and freeing those struck down by the effects of sin; that He would gather a following, but that soon enough He would be abandoned by them, rejected by His own people, condemned, and have the whole weight of mankind’s damnation pressed on Him; that He would be forsaken even by His Father and be killed on the cross. That was the Father’s business for Him. Jesus knew all that about Himself in those Scriptures He discussed in the temple. And Jesus would take care of all that business, every detail. For us.

It’s all been done. Our stresses, our sins, the hurts, the sicknesses, the worries of our world, our fears about how God sees us—Jesus has taken care of them all. He has seen to it, by finishing every task the Father gave Him, that God will be with us through all of these—every day as we go about our business and for an eternity free of every stress.
A couple of years ago, endurance swimmer Diana Nyad became the first person to swim from Cuba to Florida without the aid of a shark cage. It was a feat over three decades in the making. Nyad battled through jellyfish stings, sunburn, and dehydration before staggering ashore in Florida, mission accomplished . . . at age 64! This had been her dream, the business to which she devoted her life. For us, Jesus devoted His life—from infancy to boyhood to cross to empty tomb—to being about the Father’s business. All done. For us.