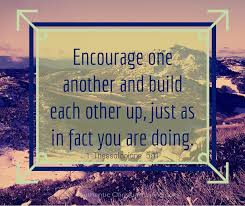 Do you have a nickname? Did you? Growing up I had a few, but I will not tell you what they were because they were not, shall we say, complimentary. In eighth grade people called me Kareem, because I was the tallest kid in school and I could shoot a hook shot. Well, I made one.

People get nicknames for a variety of reasons. Some come by a physical trait, like Shorty for height or Red for hair color. A nickname could be a shortened form of a longer given name, one that’s easier to say: Bart for Bartholomew; Beth for Elizabeth. Sometimes, you can’t be sure where a nickname came from. It seems quite a few guys have the nickname “Bud.” Not sure where that comes from, but it’s fairly common. My mom’s name was Charleen, but everyone, and I mean EVERYONE called her Sharky.

The same is true for people who lived in biblical days. The disciple Simon was given another name: Peter. It meant “the Rock,” for the solid confession he made. One day Jesus asked who his disciples believed he was, and Simon said, “You are the Christ, the Son of the living God” (Mark 16:16). Great answer, solid as a rock. Now he’s known as Peter. The disciples James and John wanted to call down a storm of destruction on a town that didn’t treat Jesus with respect. Their nicknames: Sons of Thunder. On this day, the Second Sunday of Easter, we remember that we’ve given a nickname to someone who didn’t believe that Jesus had risen from the dead. We now call him Doubting Thomas.

In the First Reading from Acts, we come across another nickname: Barnabas. The man’s name is Joseph, but he’s called Barnabas. Why? Because of what he so often did. He was an encourager. He built people up. He gave of himself to take care of others. He supported those who were all alone. He was a “son of encouragement.” That’s what Barnabas means.

What a great nickname! Barnabas, the encourager. Now that’s a nickname all of us could have. All of us can be encouragers, just like Joseph from Cyprus. Call me Barnabas. Yes, that’s got a wonderful ring to it.

When Jesus rose from the dead, people’s lives were changed. Peter denies Jesus when things get tough. On the night when Jesus is betrayed, our Lord ends up on trial. He’s headed to the cross. Peter is watching all this play out. Three times people accuse him of being one of Jesus’ disciples. Three times he says, “I’m not.” No rock-solid confession that night. He is disgraced by denial. But later, Jesus, alive, body glorified, meets Peter on a beach and restores him. Changed by his meeting with the risen Jesus, Peter rises up to become a great apostle in the Early Church.
Same for Thomas. He doesn’t believe. “Got to show me,” he says. And Jesus does just that. “Here, put your hand into the nail marks, Thomas.” Everything changes. He believes. He, too, becomes a great apostle in the Early Church. He, too, is changed by the resurrection.

We don’t know if Barnabas ever personally saw Jesus risen from the dead. But it doesn’t matter. The message of Jesus’ resurrection the apostles proclaimed was powerful and life changing too. It changed Barnabas. Jesus, the risen Lord, came to him in that message, and Joseph of Cyprus became Barnabas, the encourager.

The same is true for us. The message of Jesus’ resurrection changes us.

Are you struggling with a sin? Jesus is risen from the dead! Your life is changed because whatever that sin is, you are forgiven.

Are you doubting God’s love? Jesus is risen from the dead! Doubt becomes strong faith once again, because His death was because He loves you, and the resurrection proves that was His plan.

Are you too easily angered? Jesus is risen from the dead! Relax and be calm in His peace, because He lives to take care of whatever upsets you.

Are you afraid of getting sick, losing your job, losing someone you love? Jesus is risen from the dead! He is with you always, no matter what.

Are you weak and heavy laden? Jesus is risen from the dead! He listens to the prayers you take to Him.

Are you complaining and jealous of what others have and you don’t? Jesus is risen from the dead! Contentment comes from the Lord, who lives to grant you rich supply.

Are you trying not even to think of your death? Jesus is risen from the dead! You, too, will rise, as will everyone who confesses Him as did Peter, as did Thomas.

Are you crabby and negative? Jesus is risen from the dead! He can change you to be a Barnabas.

Yes, you can be a Barnabas too. Just look at what Barnabas did. He had some property, a field. We don’t know how big it was. We don’t know how much he got for it. We don’t know if he had other fields. Doesn’t matter. What’s important is that he did not consider that field as his own. No, he knew it was God’s gift to him to use wisely. So he sold the field and brought the money to the apostles. What was the money used for? For those in need in the church. He saw that some people didn’t have enough. He sold the field. He gave the money.

You can guess what the result was: the people in need were encouraged. Someone cared for them. Someone knew what they were going through and wanted to help. Someone was willing to give away what he had to make sure they had enough.

You know who else was encouraged? Those in the church who watched Barnabas do this. They were encouraged that someone would be so generous. They saw that what they had wasn’t their own either but was the Lord’s gift to them. They gave too. In that church, at that time, none of the members was in need. Barnabas, the encourager, changed by the resurrected Jesus, helped make that happen.

Do you see what the resurrection looks like? It’s the grace and power of Jesus working in Joseph’s life so he’d get a resurrection nickname: the son of encouragement.

It’s not the only time Barnabas was an encourager. The apostle Paul was used by God when the Holy Spirit started many of the churches after Jesus rose from the dead. He wrote many books of the New Testament. But he was not always such a passionate proclaimer of Jesus’ resurrection. No, at one time he persecuted the church, and he was good at it. He arrested people who were Christians. He was happy when some of the early believers were put to death because of their faith. But then he met the risen Christ on the road to Damascus. Everything changed. The persecutor became the proclaimer. He wanted everyone to believe in Jesus. But not everyone believed he had changed. Many were still afraid of him.

You know who helped pave the way for Paul to be accepted by the other disciples? Barnabas. He spoke up for Paul. He vouched for him and traveled with him. He put his life and reputation on the line for Paul. His words encouraged Paul. That encouragement could have been one of the reasons Paul became the apostle who started so many churches, who took the powerful message of Jesus’ resurrection throughout the ancient world. Barnabas, the encourager.

What does that look like today? Barnabas spoke up for Paul. The words he used were words of encouragement. You can use words of encouragement. You can be positive in a negative world.
You don’t even have to do it in person. You can do it online. There is a pastor in our area that goes on Facebook. He’ll post inspiring sayings, Bible verses, pictures of magnificent art, prayers, jokes. One way to be an encourager is to use words that are a gift to someone else, to build people up, to let them know someone cares, that Jesus cares.

Barnabas also gave to those in need. It still happens in the church today. At the seminary I went to, the Director of Vicarage visits students who are doing their “student pastoring” around the country. He wrote about a visit that stood out for him. The student owned his own business. He makes furniture and draperies for upscale hotels and people who know about the high quality of his work. He’s a small-business owner and has about a dozen workers in his company. As part of professor’s visit, the vicar and his wife took him on a tour of his workshop, where chairs were being upholstered and draperies were being sewn.

He introduced the workers, and he had a compliment for each one. They kept on working, but they’d heard what he said. Their work showed his words of encouragement were honest. One worker, though, was in pain. Her face was swollen. She mentioned her tooth had gone bad. The vicar was concerned about her. She didn’t have dental insurance and so couldn’t afford a dentist. He told her to go home and wait for a call from him. Then they went out to eat. During the meal, he was on the phone to his dentist. He arranged an appointment for her that afternoon. He told the receptionist to put the charges on his bill. Then he called the employee and told her to be at the dentist’s office at the appointment time.

Now tell me, who was encouraged by his providing her with dental care? The woman certainly—she needed the care. The other workers saw what he did. They had to be encouraged by the man they were working for. Are you? I am. Barnabas was no doubt this kind of “son of encouragement” (Acts 4:36).

Joseph of Cyprus is given a resurrection nickname: Barnabas, the “son of encouragement.” It’s a good nickname for us, too, when we encourage others with words that build up and by the generosity we show. But we need to remember one more nickname today—for Jesus. Jesus is given many names: Savior, Good Shepherd, Redeemer, Reconciler, Lord, Prince of Peace. But today we’ve heard another name for Jesus: Life Changer.

JESUS’ RESURRECTION GIVES GRACE AND POWER TO CHANGE LIVES INTO “BARNABASES,” ENCOURAGERS WITH WORDS AND GENEROSITY.

Jesus is risen from the dead. Jesus is the Life Changer.