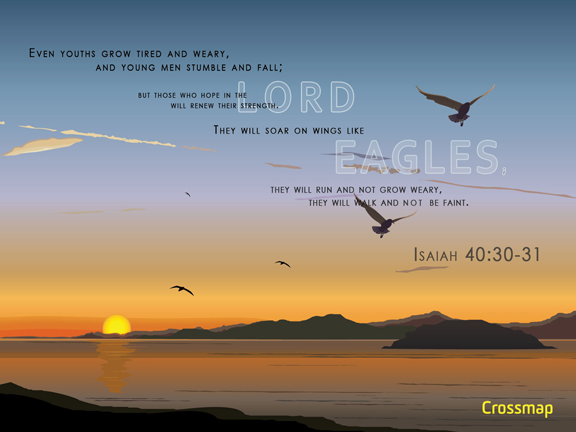 This is a warning. What you are about to hear is a fowl sermon, in fact a very fowl sermon. It is possible that this is the fowlest sermon you’ve ever heard. Let me clarify. The fowl I’m talking about isn’t spelled F-O-U-L. That kind of foul is reserved for baseballs that don’t stay between chalk lines, words that are not very polite, and basketball moves that are illegal. The fowl I’m talking about is spelled F-O-W-L, as in, you guessed it, birds.

People in the ancient Near East often used birds to make a point. In Ex 19:4, the Lord tells Moses: “You yourselves have seen what I did to the Egyptians, and how I bore you on eagles’ wings and brought you to myself.” A comment not in the Old Testament but during Old Testament times, specifically during Isaiah’s time, is attributed to the Assyrian king Sennacherib who had put Jerusalem under siege in the time of King Hezekiah. It is recorded that Sennacherib said he locked up Hezekiah “in the midst of Jerusalem, like a bird in a cage.” So today, birds will also be used to make a point or two.

Isaiah, in the text today, addresses those who know freedom and bondage. God’s people, at the time of our text, knew about God’s steadfast love, demonstrated when He delivered their ancestors from slavery in Egypt. Isaiah also addresses those who would know the birdcage of captivity; bound not by Sennacherib and the Assyrians in the eighth century BC, but by Nebuchadnezzar and the Babylonians in the sixth century BC, 200 years later.

When Isaiah wrote our text, God’s people had been captured and taken to Babylon as war prizes. What had earned them bondage like slavery like this? Well, in bird pictures: Israel had been like vultures, attracted to what is dead (Is 30:1–5). They had turned their backs on God and gone with their own wisdom. Not a good idea. They had also behaved like peacocks, consumed with and interested in only themselves (Is 3:16). They were like crows who could only carp, complain, and criticize (Is 30:9–11), like the ones that like to interrupt us here. And as chickens, who don’t really fly and eat what is on the ground, right? Like chickens, God’s people were content with the low life (Is 5:11, 20–23).

We can be dirty birds as well. Our sinful nature is attracted to what is dead (Rom 8:6a). We turn our backs on God and do what we want. We all spend too much time worried about things that are so temporary, that really don’t matter when viewed with the big picture in mind. Like the peacocks, sometimes we flaunt our status and possessions (Lk 18:11–12). In a place like Edmond, it is too easy, too tempting to play the keeping up with Jones’ games, when we know a bird in the hand is worth two in the bush. We all have something to crow about (Mt 20:20–24). We do this all the time. We see it all the time. We are all capable of bragging, at any time, to anyone. It’s been all over the internet this week how Richard Sherman was gloating on the sidelines, before the Seahawks had actually won the game. There are many times we like to call attention to ourselves, as well. And God knows there’s a part of us that loves the low life (Rom 7:18). Romans and Isaiah, as well as other Bible books, tell us not to live our lives for getting drunk, carousing, and other sinful pleasures.

To people being held as captives, as slaves, Isaiah says “wait.” A key phrase here is “They who wait for the Lord…” When Isaiah wrote this, the people saw no hope, no mercy, They thought God had abandoned them. But there was hope. They just had to wait for it. As the people knew, as Isaiah knew, eagles only soar when they position themselves high on a rock and wait for the wind, for when it comes the wind takes them up into the sky.

“They who wait for the Lord…” Jesus said as much. “Stay in the city until you are clothed with power from on high” (Lk 24:49). And ten days later, the waiting was over. Luke describes the coming of the Holy Spirit like the sound of a mighty wind. He delivers all the gifts won through the death and resurrection of Jesus (Acts 2). That wind carries us, lifts us up today.

I’m not just singing like a canary here. Isaiah writes about how Jesus gave His back to those who beat Him (50:6) and portrays the Savior’s determination to suffer (50:7). Because Jesus was led to the slaughter (53:7) yet rose again (53:10), the wind blows. “The wind blows where it wishes,” Jesus once told Nicodemus (Jn 3:8). And it pleases the Holy Spirit to blow through the Gospel to us when it is preached the way God wants it preached, we talked about that last week. The Holy Wind of the Holy Spirit blows to us when the Sacraments are administered in accordance with the divine Word. Where Jesus is forgiving sins, there is the Holy Spirit, there the wind blows.

And what is the result? We are free to mount up with wings like eagles. As Americans, eagles hold a special place in our hearts. They did for those folks back then, too. Eagles have the most powerful eyesight of any bird. The Lord tells Job: “From there [the eagle] spies out the prey; his eyes behold it from far away” (Job 39:29). From high in the sky the eagle can see a rabbit two miles away. The writer of the Book of Hebrews speaks of another eagle, old eagle-eyed Moses: “He endured as seeing him who is invisible” (Heb 11:27). Eagles are the most committed of all birds. Moses says in Deut 32:11 that the eagle hovers over its young. In fact, the eagle will never forsake her young, doing whatever it takes to teach them to fly. That’s why eagle-like Paul stayed committed to the very end. “I have fought the good fight, I have finished the race, I have kept the faith” (2 Tim 4:7). Eagles stay fresh, alive, and energized. Ps 103:5 states: “So that your youth is renewed like the eagle’s.” Every day, the eagle preens himself, breathing on his feathers because overnight they become matted and stuck to each other. Every day, the eagle secretes a liquid from a gland in his mouth that waterproofs his wings so he can fly through storms. Eagle-like Paul, again, put it in these words: “Though our outer self is wasting away, our inner self is being renewed day by day” (2 Cor 4:16).

No wonder the proverb writer declares: “Three things are too wonderful for me; four I do not understand: [the first of the four is] the way of an eagle in the sky” (Prov 30:18–19). Amazing, isn’t it? We are no longer vultures or peacocks or chickens or crows. “If anyone is in Christ, he is a new creation. The old has passed away; behold, the new has come” (2 Cor 5:17). It’s true: Because of Sin, We Can Be “Dirty Birds,” but God’s Grace in Jesus Christ Transforms Us to Become “like Eagles.”

While there are those who may approach this sermon and think it is “for the birds,” we know that all this is not for the birds, but a reminder from God’s Word of His love, His salvation, His commitment to us, as shown by Jesus in His life, death, and resurrection. Whenever you are down, remember, God can, God has, God will lift you up on Eagle’s Wings.