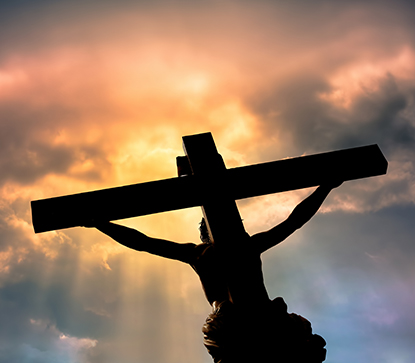 The Lutheran Church is a dying church. That may not sound good, but on this, the Sunday of our Lord’s Passion, it’s worth thinking about for a few minutes. We are a dying church. We always have been. By God’s grace, we always will be!

I hear you say, “Hey, Pastor, what do you mean, ‘by God’s grace we always will be’?” Is being a dying church a good thing or a bad thing? The answer: Yes! It’s both bad and good news—mostly good, in the end. Maybe I need to say more about that.

On the bad side, here’s one reason I say we are a dying church: a professor at Valparaiso wrote an article a 14 years ago called “Being Lutheran: Challenge to a Dying Church” (Fred Niedner, The Cresset, vol. 70, no. 1 [Michaelmas, September 2006], 39–41). In it, he noted that membership losses in the ELCA and LCMS, if continued at current rates, will leave the ELCA no longer functioning by 2046 and the LCMS a few years after that. News of our own synod’s (potential) downfall may sound very scary.

There have been folks who, over the years, thought this congregation would not be here still. In the time I have been here, we have certainly had our ups and downs, but I know this church will remain here. Why? Because He wants it to be!

Oh, I know, we worry sometimes about the numbers. We are sad when families leave and such. But we follow a Lord who calls us to die with Him. We follow Jesus, who pulls eternal life from the grave like a rabbit out of a hat and who invites us all to share His joy by taking up the cross ourselves. He has brought us to this church. And the privileges of membership in a dying church far, far outweigh the drawbacks!

Now when I say that there is a good way to think about us and a dying church, here is how that works. Jesus once had a crowd of over five thousand flocking to Him after He fed them miraculously in the wilderness. But after telling them the real food and drink was His flesh and blood, He watched that crowd dwindle to twelve guys and a few gals. Did He panic over that? Was He afraid? Did He change His message or the way He did things? No. He simply asked if the twelve wanted to go away also, and that’s when Peter said, “Lord, to whom shall we go? You have the words of eternal life” (Jn 6:68).

Another crowd gathers in the verses before our Gospel this morning, a great crowd with swords and clubs come to fetch Jesus and turn Him over to the Romans so they can kill Him. They are led by Judas, who betrays the Lord with a kiss. Peter lashes out with his sword, but Jesus tells him to put it away, and then Jesus heals the poor servant whose ear was cut off. Jesus says the Scriptures said there would be a day like this. Let it come, for the Scriptures must be fulfilled. The dying that will take place on this day will not be a bad thing, but a good thing—it will be a life given for a dying world and a dying Church.

This being Passion Sunday we have to mention Judas. You would never betray Jesus, would you? I know you would never want to. But He is betrayed by us again and again! We betray him when we try to keep Him from leading us into His church (When there is no pandemic going around). We betray Him when we tell people not to follow Him but to take up principles for victorious living or financial management or child raising, and to use Jesus as a springboard to successful living. (Lots of bestselling books in the past 20 years that say stuff like that.) We betray Jesus every time we sin and do the opposite of what He wants. He knows what is best for us, and so often we do the opposite. We are good for betrayal in so many ways.

After the kiss, all the disciples turned their backs on Him and fled. And we’ve been there too, haven’t we? When the chips are down and the numbers are dwindling, when things look bad, it’s easy to slip quietly out the back door. “Sorry, Jesus. It just wasn’t meant to be.”

So much denial and bad news in our Gospel this morning, and the verses before our Gospel! Peter denies Jesus, because who wants to be part of a dying Church? Caiaphas and Pilate condemn Him because a dying Messiah is not for them. The crowd chooses Barabbas because he, at least, resists dying. Jesus just gives in. So they mock Him, crown Him with thorns, and lead Him away. Simon is the only one who carries the cross, and that’s only because they make him. It wasn’t his choice.

And after more mockery of the dying King, His own Father forsakes Him, so that He dies in pain and agony, all alone. A dying Church. A Church of one Savior, two or three Marys, one Salome, and John. Everybody else deserted Him.

But it’s strange. At the moment of His death, the Lord finds a friend. The centurion sees Him dying, and in this death He sees a victory over death and hell. Filled with awe, He confesses, “Truly this was the Son of God!” (v 54). And then there was one more.

From that moment on, a dying Church grows. Some of the soldiers get pulled in, then the Twelve, then a few thousand at Pentecost, then—ah, but I’m getting ahead of myself.

The point is that I got pulled into this dying Church, and most of you did too—the day you were baptized. You get pulled in again every time the word of the cross goes in your ears and meets with faith. You get pulled along by the body and blood of Jesus, put in your mouth here when we are not in the middle of a pandemic. And while the dying is difficult in itself, even bad, the results are fantastic! Dying with Jesus, you live. Because He rose again and conquers death, all who share His death conquer death, too.

I am a member of a dying Church, but this is the good way: this is the Church of Jesus Christ and Him crucified. I belong to a Church where God’s Son died, and rose, for my sins. I Am a Member of a Dying Church, Which Is My Hope and Joy! In this is my strength for today and victory over death at the last. Membership in a dying Church has its privileges, for you as well. It brings the peace that surpasses understanding and guards our hearts and minds in Christ Jesus.

You are in a “dying” Church because everything we say and do here is focused on the fact that Jesus died (AND ROSE) for you.