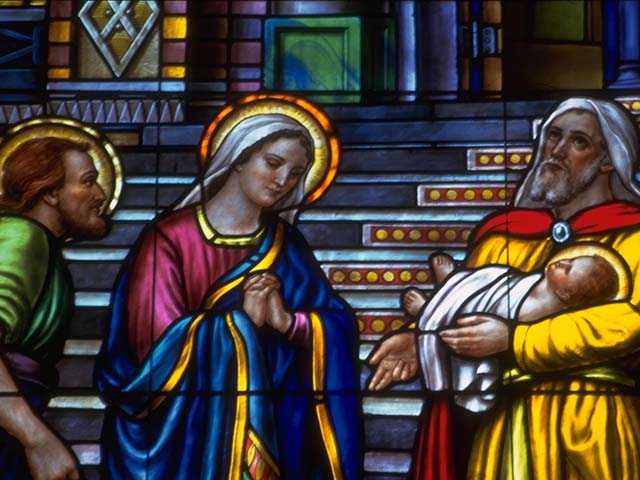 Today’s Gospel brings us back in time a bit. Today’s Gospel has a Christmas flavor, as Jesus here is a baby being carried in someone’s arms. At Christmas, we expect big things. Not so today; on the secular calendar it’s just Groundhog Day for those who care about the weather or Super Bowl Sunday for football fans, especially Kansas City fans. That’s about it. Yet today, a big thing happens: Forty Days after Christmas, Everything Changed When Jesus Went to the Temple for Us.

It’s forty days after Christmas. In keeping with Jewish Law, Mary and Joseph have brought the forty-day-old Jesus to the temple to present Him to the Lord. Big things happen on this day. One is that there is a man waiting, probably a very old man, waiting for a promise by the Holy Spirit to be fulfilled: Simeon. On this day, his life will be changed forever. Another is an eighty-four-year-old widow who spent her life in the temple, “worshiping with fasting and prayer night and day” (v 37): Anna. On this day, her life will be changed forever. And for Mary and Joseph, their lives were changed forever. So it is for you and me, and for every Christian man, woman, and child, Jesus changes everything.

First, there are the parents, Mary and Joseph. They don’t look like much when they walk into the temple that day. We forget that. The pictures of the Holy Family are always photo-shopped to make them look magical, mysterious, larger than life. But they were just poor peasant people.

We know that because of the offering they give this day. Leviticus (12:8) called for a lamb to be sacrificed at the presentation of a firstborn, along with a pigeon or dove. But if you cannot afford a lamb, then it’s “a pair of turtledoves, or two young pigeons” (v 24). That’s the situation with Mary and Joseph. They are poor folk. Likely, you wouldn’t have even noticed them if you had been at the temple to worship that day.
But Mary and Joseph were like any other parents, in a way. When you ask parents what they wish for their kids, the answer is always something like happiness, health, a long life—maybe that their child would grow up in the faith, maybe that their child would be a “good person.” Very often parents also express their fears about their kids. They hope that they’ll be safe from harm, won’t get into drugs and alcohol or casual sex. They hope that their kid won’t be corrupted by what’s on television or video games; they pray that their child will never have to be sent off to war.

What we parents are really saying in all this is that we hope that our children will not break our hearts. We do want what’s best for our kids. But it’s also about our own feelings, hopes, dreams. We don’t want to have our own parental hearts broken.

What do these parents, Mary and Joseph, hear about Jesus? They hear Simeon’s prophetic word: “Behold, this child is appointed for the fall and rising of many in Israel, and for a sign that is opposed (and a sword will pierce through your own soul also), so that thoughts from many hearts will be revealed” (vv 34–35).

Though Mary and Joseph may appear to be nobodies, the Son they carry to the temple will turn the world upside down. Therefore, He won’t have our version of happiness. He will lose His health for the world’s sake. His earthly life won’t be a long one. Those in the faith will consider Him to be outside of it. He won’t be safe from harm; He will hang out with alcohol abusers and prostitutes. And He will be sent off to a war against nothing less than sin, death, the devil, and hell.

But the lowly, the meek, the suffering, the sinful, the repentant, the hopeless, the lost, the lonely, the world-weary—they will be raised up by Him. Simeon was one of them. (One who was raised up) He was a man on a mission, always looking, always searching, always living on the promised hope that he would not die until somehow, sometime, some way, he would see the face of the Messiah, the Savior, the Lord. He would not have peace until he saw Jesus with his own eyes.

Then there’s Anna. She was one of the world-weary ones. In her eighty-four years, she had seen it all, including the death of her husband and maybe one or more of her children. She lived in a time when her country was occupied by Roman soldiers. Political corruption was everywhere, led by rulers who came and went—after bleeding their people dry. There was unfair taxation that fell heavily on the poor. And even the temple where she took refuge had greedy priests and faithless teachers.

Yet in the middle of all this, or on the edges actually, was Anna—faithful, loyal, fasting and praying, and waiting—until this day, until this Child came to the temple. “And coming up at that very hour she began to give thanks to God and to speak of him to all who were waiting for the redemption of Jerusalem” (v 38). Like those crazy shepherds we heard at Bethlehem forty days ago, Anna could not stop speaking of God’s great mercy in the Child who changed the world.

This Child is the one who changes everfything. And this is how He does that: He fulfilled the Law on our behalf. Every last detail of all that God commanded and demanded is completed in Him and done by Him. For this reason, He is brought to the temple. Mary came to the temple for her “purification according to the Law of Moses” (v 22). The law said a woman after giving birth had to offer a sacrifice—in the case of a poor family, two turtledoves or two young pigeons.

But this sacrifice wasn’t required to pay for some sin in the mother or because childbirth itself created some kind of guilt. Instead, it reminded that the sin of Adam and Eve was always being passed down to the next generation. There was no escaping it—anymore than someone could make his way into the world without being born. And sin always requires a sacrifice.

There was one exception, one who entered the world by birth without inheriting sin. That would be…Jesus. And that was God’s perfect plan so that Jesus Christ could fulfill the Law for those who did enter the world thoroughly corrupted in sin: you and me. Mary’s purification was a picture of the purifying we needed; without it, we would be lost forever. Jesus is presented in the temple as our substitute so that we would be purified.

In those moments when we feel, like Anna, world-weary, as if everything around us is out of control, we can cling in faith, as she did, to the promise that God is not only still ruling the universe, but very present right here where we are—in our little piece of the world.

Like Simeon, our eyes also are opened to see Him—in the worst of times even. In Jesus’ weakness—here as the forty-day-old baby—we see our salvation. In our weakness—when we are helpless as a baby—we have the Lord’s salvation. The light of the world does not come as a lightning bolt, but as the gentle light of Mary’s little Son.

It’s true, He doesn’t stay little. But here already as we see Jesus the little one, we see what He has come to do. Not only will He keep all the Law perfectly in your place, but He will also provide the payment, the redemption price, that covers all your sin so that you can come to His place.

Mary and Joseph could not afford a lamb to sacrifice, but there is more to it here than their poverty. The lamb is really the baby in their arms. As John the Baptist pointed Him out, Jesus is the Lamb of God who takes away the sin of the world. The sacrifice—the final sacrifice—will not be made until Jesus returns to the temple again, only to be thrown out, nailed to the cross outside the city, for us, for our forgiveness. He will suffer the pains of death, the sorrow of burial, for us. But He will rise for us, so that, as we pray today in the Collect, “we may be presented to [God] with pure and clean hearts.”

That is who we are because of this day. Forty days after Christmas, and we see our salvation. We are now Simeon, ready to depart in peace. We are now Anna, speaking to one another what God has done. We are Mary, a sword piercing our hearts, until the day that our eyes are opened for good, to see the Lord’s salvation, to look on the light of the world, to rejoice in the Lamb of God, to dwell with Him forever in His peace. Jesus changes everything.