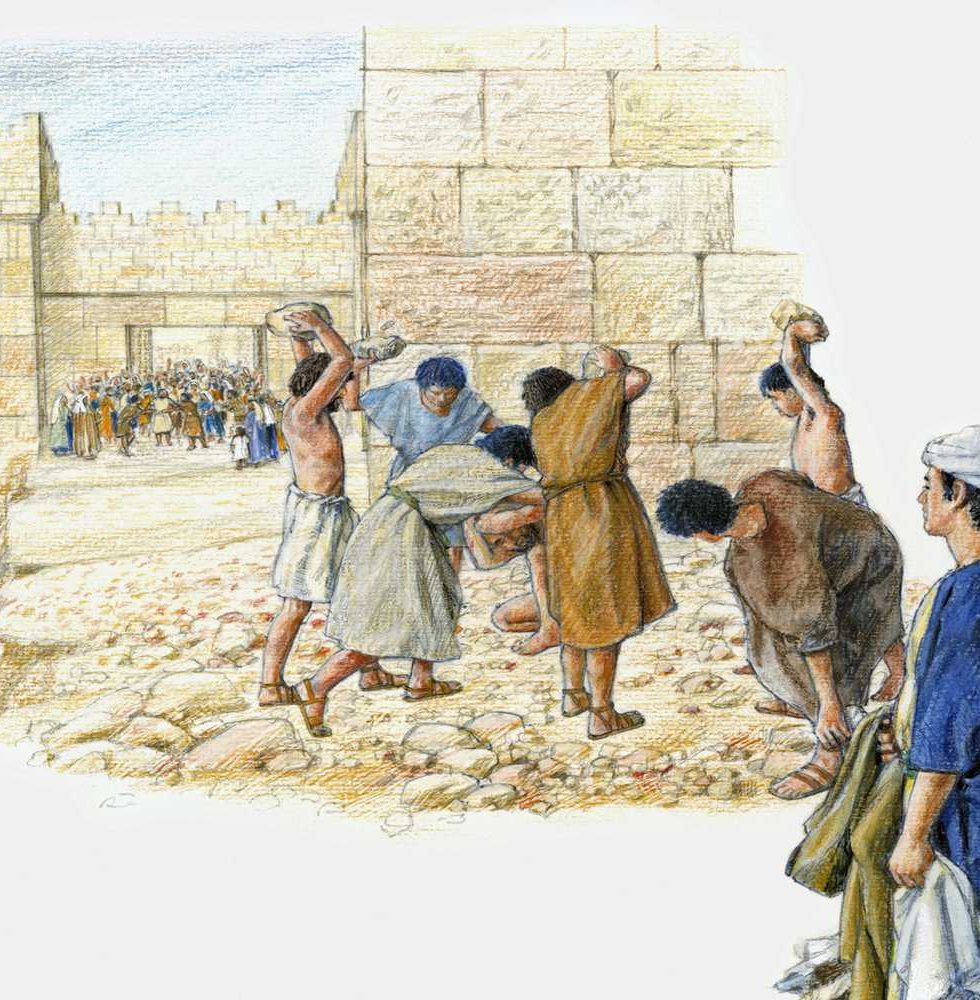 I like to watch movies. I do not think this is a secret to you. I must also admit that most of the stuff that comes out today, well, I find it lacking. I guess I am getting old because when it comes to movies, or a lot of things, I think or say, “They sure were better when I was younger.” Maybe you are planning on viewing the movie, “Mother’s Day” later.

But I still keep trying to find a new good movie. And these days, I see this stuff streaming, not at the theater. When I think about renting or watching a movie online, whether through Netflix or Amazon or Vudu, I have this habit of watching the trailers. Just looking at the title and the description is not enough for me. I want to watch the preview to see if the movie is worth watching. Or to see if it is just like ten other movies I have seen. And of course, sometimes they pretty much tell you the whole movie, which is bad.

In our reading from Acts this morning, we have the account of Stephen’s stoning. And I want you to notice something. We don’t have the full story. Since it would take too long to read the whole account from Acts, the Church has assigned us to read excerpts. Scenes. We have highlights from the “film,” from what happened, if you will.

This tells us that the account of Stephen has it all. You have underdogs: Stephen and the poor. There are miracles. Threats. Great speeches. Violence, so you know this is an action movie. And a special effect shot of heaven.

This morning, we are going to take a moment to think on these scenes of God at work. We will see how God Is at Work in the Little Things and the Big Things and trust that God continues to work in our lives today.

As the text opens, notice how Luke directs our eyes from the apostles to Stephen. Luke wants us to see the various ways in which God is at work. It would be easy to see God’s work happening among those who dedicated themselves to teaching the Scriptures. And it would be easy to see God at work among disciples performing miracles, signs and wonders. But those who give food to the poor? What is so special about that? Yet that is what Luke is interested in. He names all the people who are called to give food to the poor. He notes the importance of the Spirit being among the people who are chosen to do this task. And even though Stephen was doing miracles, signs and wonders, Luke doesn’t tell us what those signs and wonders were. What Luke focuses on is that Stephen was chosen to distribute food.

It is as if Luke was looking at our congregation today. He sees the pastor, studying the Scriptures and getting ready for a sermon, and then a DCE putting together a trip for the kids to go to the youth gathering, and then, over in the corner, one parishioner standing by a box gathering jars of peanut butter for the food bank. And Luke stops and speaks about that person. The Holy Spirit is involved in all these things—in the Word that is proclaimed and in mission work (the youth gathering is mission work) and in the acts of service—but Luke, in this part of the book of Acts, wants us to see God at work in the mundane, in the things that don’t get the big headlines. Luke wants us to see that parishioner gathering food for the poor and know that God is there in that work.

When Jesus came into this world to bring us salvation, His work extended from the massive to the mundane. Yes, He walked on water, gave the blind sight, He raised the dead . . . but He also blessed and welcomed some kids, He hung out at Peter’s house, and talked with a woman at a well.

So often, we can pass by the simple ways in which God works in our lives. We see Him working on Sunday, through Word and Sacraments, but then we may forget about Him during the week. We look at the food on our table and remember buying it at the store. We don’t see God at work through farmers and grocers to feed us. We look at the paperwork mounting on our desk and wonder how we are going to get it all done.

We don’t see God at work, calling us to our vocation with the “job” we have in this world.
Luke, in this scene from what happened to Stephen, asks us to see that God is at work in what our world would call the mundane, the “small” things. When Jesus suffered for our salvation on the cross, He took upon Himself every sin, what we think are the big ones and the small ones, that He would bring us into God’s kingdom, where we experience every blessing, big and small.

Now after I have reminded you that God works in the small things, we go back to the obvious thing in Scripture that God does BIG things. Later in the account, we have scenes from the death of Stephen. Here, we see God at work in a BIG way.

If you know anything about movies, we might expect God to come into this account of Stephen and perform some mighty act of deliverance. God, the superhero, could rescue Stephen from the rabble and bring about a happy ending here on earth. But God doesn’t intervene like that. And God also doesn’t just sit back in the heavens, unconcerned about the things that are happening on earth.

Listen to how Luke tells us what happened. Stephen is dragged out of the city and stoned (people threw rocks at him until he was dead). We can see the scene. A man is hit with stones. He cries out in pain. Yet, when Luke records this, he asks us to overhear not screams of pain but a prayer of faith. Stephen says, “Lord, do not hold this sin against them” (Acts 7:60). As Stephen dies, we hear echoes from the cross—Jesus saying, “Father, forgive them, for they know not what they do” (Lk 23:34). Finally, when Stephen breathes his last breath . . . when Stephen dies from stoning . . . Luke tells us that he falls asleep.

Jesus entered into this world, suffered, and died in order to take away all sin. And in rising from the dead, He revealed to us that He has conquered all sin, all evil, even death itself. Nothing can separate us from God’s love. (Paul)

God is at work in the world. Not in the way skeptics say—hovering above the world, never actually being in the lives of real people. And not in the way some people think—being with Christians so that nothing bad ever happens to them. No, God is here, in the middle of suffering, transforming that suffering into something good. While we all hate what is going on with this COVID-19 stuff, we all know there are people who are closer to God because of what has happened the last two months. As Stephen is joined to the suffering of Jesus Christ, he is also joined to the glory of Jesus Christ. Nothing can separate us from the love of God, who is active and at work in our lives and in His world. God is with us, loving us, comforting us, blessing us, even when the bad stuff is happening to us.

To start to wrap up here, we go back where we started today. Previews have a purpose. They are there to encourage you to watch the film. The beauty of this preview of what happened with Stephen is that it assures us that God is at work in the world. God is not distant from the world. He did not create us and then forget us. But God is at work. Nothing—not even death—can separate His people from Him. And everything—even death—can be used by Him to bring us good things.

These scenes from the life of Stephen, then, invite us not to sit in front of a movie screen, a TV, a Netflix device, but rather to go into the world, knowing that God is at work in all the big things, and all the little things in our lives.