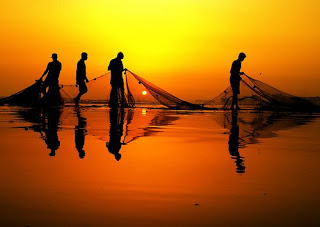 Have you ever made a big move/a big decision without thinking about it? Impulsively? How did that work out? That is not the way I do things. I am one of those people that thinks, researches, looks at reviews, and then makes the decision or the purchase. I can give an example from my family. (Dad bought the Pontiac Sunbird.) There are times that making an impulsive choice can work out, but I don’t think doing that every time is something that we want to do.

Whenever I hear this account of Peter and Andrew and James and John, these four fishermen, immediately leaving behind their nets, their boats, and, for two of them, leaving their father, I wonder, “What did their mothers think?” Did one mom ask, “How can you be so irresponsible?” Did Salome say to James and John, “Are you really going to leave your dad to take care of the whole business?” Did Peter’s mother-in-law say, “Why did my daughter have to marry him?” St. Matthew does not tell us any of this. We only hear that they left and followed. That is what matters. But . . .

Back to the text, on one level we can look at what they are doing and say: It’s crazy! It looks like these disciples are making an impulsive and hasty move (vv 18–22).

Peter and Andrew, James and John had built a solid business, a settled life, homes and families, you know what I mean. Why would they so quickly leave all that behind to follow Jesus? Why would they give up the lives they had, to follow such an unknown?

We often have to face the same thing. You have your ways of seeing the world, your comfort zone, your own settled life. Whenever Jesus calls you, in His Word, He calls you to change, to repent, to be not what you were before. Why would you ever leave behind what you know in order to be changed by Him?

Jesus knows what that is like, in a way. Jesus left His hometown of Nazareth to begin His ministry out of Capernaum (vv 12–13). He would not return home except to visit, and the Gospels tell us that those visits didn’t go well. Much more than that, Jesus left His incredibly comfortable, heavenly home (literally), where He had the perfect fellowship with His Father and the Spirit, when He was conceived by the Holy Spirit in the Virgin Mary’s womb. That’s crazy! Right? The lengths that Jesus was willing to go to bring us forgiveness and save us.

All of this seems kind of crazy. Or is it? For these four fishermen, is it really so crazy (vv 13–16)? What were these guys really leaving behind? Isaiah called their land, their Galilee, “the people dwelling in darkness”; they were among “those dwelling in the region and shadow of death.” Perhaps everything was not really as comfortable, as great as it seemed.

The people around the disciples were not all doing well. The crowds suffered from a whole list of things (v 24). I mean, those folks Jesus healed, that is quite a list of stuff there, right? Who wouldn’t want to leave those things behind?

What kind of darkness are we in? What kinds of sicknesses exist among us? No matter how settled or comfortable our lives may appear, we are living in, with, and surrounded by sin. We chase after other gods and harm ourselves and each other. There are lots of gods we replace Him with: Money. Power. Pleasure. Hobbies. You know what I mean. Because of sin, we have the flu, colds, cancer, divorce, and death itself. Who wouldn’t want to leave that stuff behind?

Huh. Maybe it isn’t so crazy after all? Maybe it isn’t crazy to follow Jesus (v 20). These four fishermen will see it all. They will have a front row seat for Jesus’ miracles and healings. Their ears will be the first to hear the amazing words that will come from Jesus. At the time of our text, they have not seen it all, or heard it all, yet. At the start, they don’t know where the finish will be. They don’t know where Jesus is taking them, and many times they’ll think He’s going the wrong way. They won’t know the true joy of following until the resurrection of Jesus.

We see and hear so much from Jesus. We have the whole salvation plan laid out in the four Gospels, of Jesus’ life and healing and teaching. We have God’s Word with us every day. We have forgiveness, starting already in our Baptism and we know and receive this forgiveness every day. We have the Lord’s Supper given to assure us that we are His forgiven children. We have not seen the end, but God’s Word tells us how all this will end. We walk by faith, not by sight. Yet, It Isn’t Crazy to Follow Jesus, Because Already as We Follow Him, We See the Light.

Because Jesus, the light of the world, is God of God and Light of Light, He did not stay dead after He died. Jesus rose from the dead in order that the light of His grace may shine through the whole world.
The fishermen turned fishers-of-men were each witnesses of the resurrection light. They proclaimed to the world that Jesus is the light of the world.

We live by their witness. We have the light of Jesus Christ through their word to us, the word we hear today. We follow Him today, laying down the sins we confess and being healed in His absolution. We follow Jesus today, acting on His invitation to be fed and nourished at His Table. We follow Jesus tomorrow, when we go off to school or work in His name to be His people in this world.

And following has to begin somewhere (v 23). Galilee was as good a starting point as any. It was a place of sin and sorrow and sickness. Yet it’s the place Jesus comes, with His call to leave the old and enter into a new life in Him. He changed those fishermen by His Word, and by the work of the Holy Spirit. Their lives were never the same. They are already in the Kingdom, the reign of the King. The beginning is now shaped by the end. Jesus knows how He will love these disciples and His whole world with His holy life and innocent death and victorious resurrection. He has called them to follow Him there.

Where you are now is the place to begin. No matter where you are in your life, Jesus is here in His Word to call you to follow Him, to be forgiven by Him, to live in His grace that makes you His. When you have lived for money or power or pleasure or hobbies, you are forgiven. No matter how you feel, Jesus is here in His Word to tell you how He feels about you. He wants you to come with Him, to see what He has done for you, and to see what He will do for you.

No matter how sick or healthy you may be, Jesus is here in His Word to heal you in heart and spirit, by His mercy, and as a sign of the healing that is to come in Him forever. Because God is looking after you, because Jesus died and rose for you, we know that days of flu and colds, and cancer and divorce and death will end. When He comes back, all of that stuff will go away.

It is not crazy to follow Jesus. It is where we are supposed to be. It is our life to be with Him, to hear Him, to be loved by Him, and at last to see Him and be with Him, in His Light, forever.