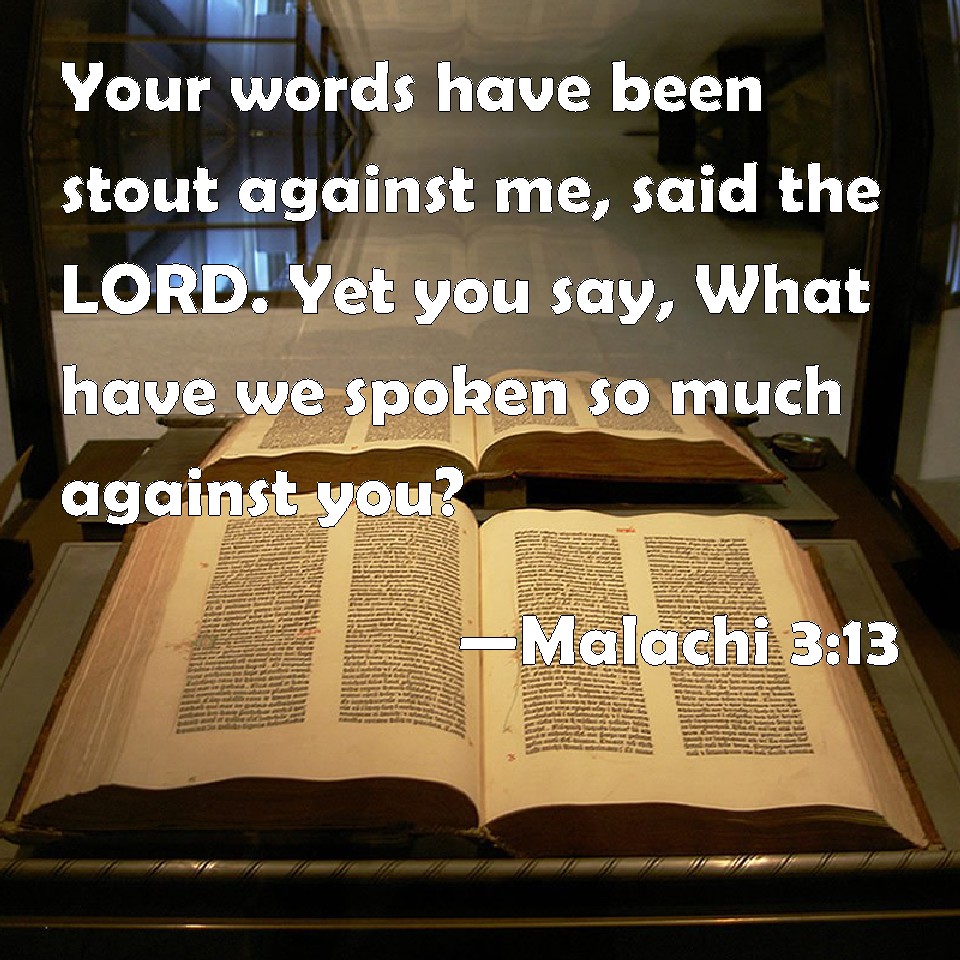 Biblically speaking, we Christians are used to speaking up for God. I have often reminded you of your responsibility to speak up for God. But more and more today we hear strong words, words hard to hear, harsh words, words of defiance. We talked about this last week from this pulpit that sometimes people think God has abandoned us, and our duty as Christians in this divided country is to be love and compassion, and not join in with all the hard words being directed at people who do not think the way we do. Today, we are talking about hard words directed against God. Words by which people think they can declare independence from God. You hear it all over our culture. College Professors, demonstrators, girls that you thought were Roman Catholic who you asked out on a date only to be told that belief in God was about the stupidest thing she had ever seen.

In the Old Testament reading today, we read “Your words have been hard against me,” which the Lord says through His prophet Malachi, and He calls His people to account for those hard words against Him. We should not do this either, for God reminds us to look back and remember all His works for us. God Always Keeps His Promises and in Jesus Makes Us His Treasured Possession.

“Your words have been hard against me, says the Lord. But you say, ‘How have we spoken against you?’ ” (v 13). Listen to the whole charge God’s people bring against Him: “You have said, ‘It is vain to serve God. What is the profit of our keeping his charge or of walking as in mourning before the Lord of hosts? And now we call the arrogant blessed. Evildoers not only prosper but they put God to the test and they escape’ ” (vv 14–15).

Do you hear what they were saying? “God doesn’t care about us. We’re His people”—supposedly!—“but we don’t get any better deals than the people who ignore Him, who do whatever they want. They don’t get punished; they get off scot-free. We’re wasting our time being people of Yahweh!”

What happens when the Lord remembers? It’s not that He recalls something He’d forgotten. God’s mind doesn’t work like ours, like when we get up to go into the kitchen and then we forget why we went in there. When God “remembers,” He holds His promises up for all to see. In other words, He keeps His promises and He reminds us that He keeps His promises.
How do we know God keeps his promises? The Bible says so.

Quite appropriate to this Last Sunday of the Church Year, Malachi is the last book of the Old Testament. It’s God’s last word to Israel before the fulfillment of His greatest promise. Next time God comes around, it’s going to be in person, in the person of the promised baby in Bethlehem. It’s going to be four hundred more years of waiting, but He is going to come. What God’s Word says, happens.

Just as when God’s Word in the flesh, Jesus, told the repentant thief, “Today you will be with me in Paradise,” and that’s exactly what happened. He was “delivered from the domain of darkness and transferred [by Jesus himself to his kingdom, for in him] we have redemption, the forgiveness of sins” (Col 1:13–14).

The crowd around Jesus at the cross spoke hard words: “He saved others; let him save himself, if he is the Christ of God, his Chosen One!” (Lk 23:35). Jesus responded with soft words but far greater words, words far stronger than any other: “Father, forgive them, for they know not what they do” (23:34).

In other words, promises were kept. The Word of God was fulfilled in the birth, death, and resurrection of Jesus.

For the Lord has compassion on us. The Lord says, “I will spare them as a man spares his son” (v 17b). Is 63:9 uses the same word to speak of God’s compassion, so “to spare” is to “have compassion,” or pity, on someone.

The irony here is that, while a man spares his son, in the case of this son, the Son of God, God did not spare Him, did not have compassion on Him, but sent Him to the cross. He gave Him up to suffering and death. And Jesus could not save Himself from the cross if He wanted to save us. But God did it all so that He might have compassion on us, put our sins on Jesus, and make us His sons and daughters. His promise of everlasting love and compassion is fulfilled in Jesus Christ.

So repent of your desire to doubt the goodness of God. He always keeps His promises! Jesus is the proof. Jesus is the guarantee that God’s Word is true.
Our faith may be put to the test by our circumstances, but God’s purpose is only to show us ever more clearly that Jesus is for us.
Even when we forget, He remembers us. He makes us His own. He restores us when we fall: “Father, forgive them.” He remembers us when He comes into His kingdom. He gives us paradise. He has made peace for us, reconciling all things to Himself.

Whatever your circumstance in life otherwise, you will go out from this place as God’s treasured possession. You live in the knowing of promises kept. You have His Spirit to speak up for Him. You know that Jesus is King from the cross and from His open and empty grave. And as this Last Sunday of the Church Year directs us to look forward to Jesus’ return, yes, when He returns, “You shall see the distinction between the righteous and the wicked, between one who serves God and one who does not serve him” (v 18). He has never forgotten that!

There is no need for us to throw “hard words” at God, no need to speak against Him, for He keeps His promises. Your name is written in His book of life (Lk 10:20). He will remember you forever.

In the name of Jesus.