“A Place for You”

“A Place for You” 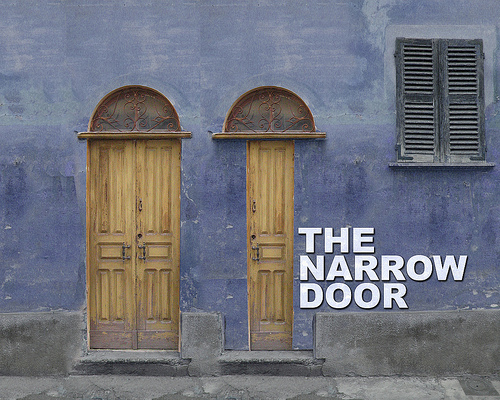 What are your plans for lunch today? I know many of you like to go out to eat after church. If a restaurant is in your plans for later (this morning), you would expect that when you got there, you would be given a seat and a menu, right? But what if you arrived at IHOP, or Jimmy’s Egg, or Eggington’s, or the Hash Retro Diner, or Café 501, and found that people from Tulsa or Dallas or from the other side of the world for that matter, had filled the place up and were waiting in line outside the building? What if all those people, lined up as far as the eye could see, had reservations, but you didn’t? Also imagine that the restaurant you were at was the only one, and all the stores were closed, too, and your kitchen cupboards and your refrigerator were all empty. You must watch through the windows as everyone in there gets to eat, and you are on the outside looking in. That would be bad, right? No fun?

If you can picture this, you can begin to understand how it will be for those who die outside of Grace, without faith, or who do not believe in Jesus on the day He returns. Their loss will be so great, it will not just mean a lost meal, but a lost life forever. Today, we hear Jesus talk about His kingdom, and how He has prepared, “A Place for You.”

Today, in a sense, we are picking up where we left off last week. Last week we talked about the Big Lie; the people that say that there are no sins and therefore no consequences to misbehaving. We ended last week with me reminding us all we have to go out there and tell the truth, tell God’s Word, no matter how unpopular that might make us. I told you that we all have this responsibility, because we want all people to turn away from their sins and repent so that Jesus’ forgiveness will be theirs, and they will be saved.

It is a sad and regrettable fact that there are those who will be excluded from the kingdom of God. Of course it is not God’s will that this is, and will be, the case. I have heard many times from folks that they refuse to believe in a God who could send people to hell. In all honesty, it is not God who sends people to hell. People send themselves to hell. Those who reject God and His gifts are excluding themselves from heaven. C.S. Lewis once wrote that the gates of hell are locked from the inside.

Jesus tells us in the Gospel today that many will seek entrance to the kingdom of God, but will be left outside. It will be a tragic shock for many who will have excluded themselves from God’s kingdom. There have been, and there will be many more, who are surprised that what was in the Bible was true all along. Lots of folks out there who think what we teach and believe here is nonsense. There are lots of folks who are in churches and are just going through the motions (not as many as there used to be), not believing what is said and taught here, and they will be surprised when they find out that just being in a room like this once in a while is not enough to receive salvation. Simply parking ourselves in a church pew or doing religious things does not make us fit for a place in the kingdom. As the saying goes, “You can warm your socks in the oven, but that does not make them biscuits.”

Nevertheless, all of God’s children are invited to enter the kingdom of God. Hitler was invited. Manson (Charles and Marilyn) was invited. Bin Laden was invited. Jesus said in the text today, “Make every effort to enter through the narrow door.” This is God’s invitation. Jesus is the Way, the entrance into the presence of God. Jesus said in John 10, “I am the door.” Jesus is the way and the truth and the life, belief in Him and His death and resurrection. Everyone who enters the kingdom of God does so through Jesus, and through the work of the Holy Spirit in here (heart). Through faith in Jesus, a humble faith that acknowledges that we enter the kingdom of God only by His grace, His Gift. In Baptism, the Holy Spirit claims us as His own redeemed child and works faith in our hearts to trust God and receive His gift of forgiveness and salvation. Our place at the heavenly banquet is reserved by what Jesus did, not by anything we do.

Think of it this way: how many jobs or job promotions come to those who don’t necessarily deserve them? So often it is who you know that gets you the job or promotion, not what you know. The same is true of God, only with a different twist. NO ONE deserves entrance into the kingdom of God for all have sinned and fall short of His glory. Like I said last week, we are all terrible. Nevertheless, those who are known by God are, as St. Paul writes, “called and justified.” It isn’t who we know, it’s that God knows us. Blessed with faith and baptized into Jesus, we have a place in the kingdom.

So be assured, my brothers and sisters in Christ, when that day comes to begin the eternal banquet with Jesus at the Father’s table, we have a place waiting for us. But I ask you to think a moment about those who do not have one. Picture in your minds, those who will be left on the outside, looking in on that feast we will enjoy. Maybe you know someone in that position. For those who do not go through that narrow door of Christ, hell, a real hell, is their future.

The story is told of a famous fisherman in Louisiana who was at his cabin on the bayou when a stranger came by who wanted to go fishing. As they got into the boat, the stranger noticed that the famous fisherman had no rod or reel, only an old rusty tackle box and a net. After a while, they entered an isolated cove. The stranger watched with interest as the fisherman reached down into the tackle box, pulled out a stick of dynamite, lit the fuse and threw it into the water. There was a muffled explosion followed by the surfacing of a number of stunned or dead fish, which the fisherman proceeded to scoop up with his net. Suddenly, the stranger reached into his coat, pulled out a large badge and announced, “I caught you! I’m the new game warden, and you are under arrest.” The famous fisherman didn’t bat an eye. He calmly reached into his tackle box, pulled out another stick of dynamite, lit the fuse, tossed it to the game warden and asked, “Are you gonna fish or are you just gonna sit there?” We are Jesus’ disciples. He has made us fishers of people, and He asks with similar urgency, “Are you gonna fish or are you just gonna sit there?”

It is my prayer this morning that each of us, as children of God, will double and redouble our efforts to reach out to those we know who do not call on Jesus as their Savior. It is our calling, our responsibility, and our sacred duty to act as agents for the work of the Holy Spirit, and aid in God’s quest to rescue all that are lost. He has rescued us. We can now help rescue others.

My brothers and sisters, I stand here today assuming many of us know how it feels to be excluded. Last one picked for the team or left off the team. The only one in your group to not go to the prom, homecoming, etc. You go to sit down at the school cafeteria and you are told that seat is taken…and it turns out it isn’t. There are many, all around us, who are on the outside looking in when it comes to their souls, their salvation, their eternal destiny. As Christians, we cannot be content to know someone is not going to heaven. We need to do everything we can to see that those we know around us who do not have what we have, will have what we have. And while we labor to make that so, what joy we have, knowing God has reserved a place for you and me in his kingdom. You have a reservation. A place is prepared.